The movie revolves three American girls who take a trip to Paris and get caught up in a case of mistaken identity.

Teen superstar and Bieber’s babe Selena Gomez stars in the romantic comedy Monte Carlo co-starring Leighton Meester, Katie Cassidy and Cory Monteith. The movie revolves three American girls who take a trip to Paris and get caught up in a case of mistaken identity, based on the Jules Bass novel “Headhunters” and directed by Thomas Bezucha. 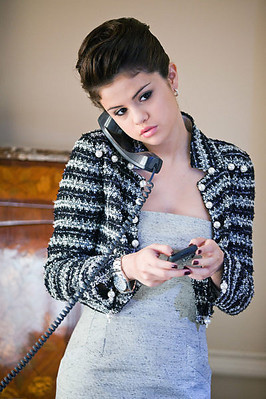 Gomez plays Grace, a young woman who uses her savings to go on the Parisian holiday of a lifetime, bringing along her best friend and her uptight big sister. When Grace is mistaken for Cordelia, a British heiress, the trio find themselves swept into a storybook world of romance, paparazzi and couture as their vacation takes them to Monte Carlo.

However, the holiday is not without its crazy moments, as the girls must avoid the real Cordelia (also played by Selena Gomez) as well as dealing with the suitors pursuing them accross Europe.

Selena Gomez, 18, first appeared in “Barney and Friends” at the age of nine and is most famous for her role as Alex Russo in “The Wizards of Waverly Place” shares in the following q&a shares her experience on filming her first movie out of Wizards. 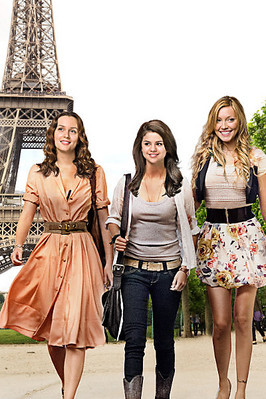 Q. Do you have anything in common with your character?

A. Like Grace, I grew up in a small town, and I was determined to branch out and do something that I love. Being at home is wonderful, but I think you need to be prepared to push yourself out of your comfort zone and explore all your options if you’re going to achieve your dreams. I think that’s something that I share with Grace.

Q. What was the most challenging part of making the film?

A. This is by far the hardest job I’ve ever taken on. Because I graduated this year, this is the first project I’ve been able to work on as an adult. It means working 17 hour days, which can be quite intense! It’s also been one of the most fun projects I’ve ever worked on. Monte Carlo is a beautiful place to work, and I’ve got some amazing people around me – Cory’s so much fun, and Leighton is like a big sister! They make me feel relaxed and carefree.

Q. Is it tough to be away from your family and friends during filming?

A. Well, I’ve got my Mom with me, and my friend Ashley flew over from Texas. I miss my friends a lot. The internet is really bad here, which doesn’t help. I talked to my Grandma on iChat once. She’s really tech savvy – my Grandma has got it going on!

Q. Who are you closest to on set?

A. It’s impossible to pick just one person! The girls are amazing. Leighton and Katie are so sweet and affectionate. You know that they’ll always be there for you. Katie is really honest. She’s a big fan of tough love and she has lots of strong opinions that she’s happy to express. Leighton is a bit more romantic and dreamy. She’ll be the one saying “follow your heart” when you need advice.

Q. Has working on Monte Carlo inspired any of your songwriting?

A. We shot a lot of the movie in Budapest, and I recorded half of my album while I was there. I wrote a song called Ready, Steady Go, which is about how it feels to move to a different country and all the anxieties I had about going. I was terrified, but I was surrounded by people who helped and supported me. The whole theme is about following your heart and finding yourself.

“Monte Carlo” opens July 1 in theaters from 20th Century Fox to be distributed by Warner Bros.