At the end of his decade-long journey, Radcliffe shares a sense of gratitude as he, together with the cast and crew, brings the series to a close.

At the end of his decade-long journey playing Harry Potter, Daniel Radcliffe shares a sense of gratitude and pride as he, together with the cast and crew, brings the historic film series to a close in Harry Potter and the Deathly Hallows – Part 2. Radcliffe reflects, “I know I’ll never see a frame of these films that I don’t connect immediately to a memory of a place or a time or a person. Even now I can’t fully express how important it’s been to me, but I can say it was a great time and it’s something I will never be able to recreate.”

Question: Has there been any crying since you all know the “Harry Potter” films are ending?

Daniel Radcliffe: There was lots of crying for Emma, Rupert and I, and the crew as well because a lot of them have been there for 10 years as well. So, there were lots of tears from everybody, really. It was very sad. And, at the time, I remember sort of being quite inconsolable for like two hours. And then four hours later I was on a plane and I was reading a script for another movie. So, we move on. [Laughs]

Q: We’ve seen over the ten years how you’ve changed. But how haven’t you changed? How have you remained the same?

Radcliffe: I’m still very hyperactive. I’ve still got quite a lot of energy. I think the one thing that’s different is that I have worked out a way in which I can sort of pace that energy more sensibly throughout the day so I don’t just go nuts for four hours and then crash and burn. [Laughs] I’m probably still as curious now as I was then. I think curiosity is probably the greatest thing anybody can have. And I think I’m still quite respectful of a film set as I was then. But when I was 11, it was out of a sort of awe that I had respect for film sets.

Q: The fandom for Harry Potter has grown so huge and is constantly evolving and growing with the films. What are your thoughts on just the sheer size and scale of it?

Radcliffe: In terms of the actual scale of Potter, I think it is amazing. In a way, one of the things that keeps me grounded and sane is the fact that you have to remember that it’s not because of me that people are screaming at the premieres. Anybody who got this part would have had that level of mania surrounding them a few weeks a year. And I think that’s very important to remember. I just got very, very lucky with the part that sort of I fell into.

The other thing I think I’d say about the fans and about the scale is the fact that it’s interesting, because Harry Potter—even though there are films now—is still, at the heart of it, a literary phenomenon. And when you compare the fans of this to something, say like Star Trek or Star Wars, all of which have that same incredibly devoted fan base, because it starts off as a literary thing, it’s kind of inspired a generation of really, really, literate, interesting fans, people who—having been so inspired by the Potter books—have then gone off and expanded their reading into other areas. I think that’s the most remarkable thing about it. I don’t think there are any other kinds of fans like Harry Potter fans, who are so interested in everything, not just the thing that is the focus of their fandom.

Q: When you were reading the Potter books, did you ever think, ‘I would love to be Harry Potter’?

Radcliffe: No. Not particularly. His life sounded like a nightmare. [Laughs] I kind of thought, ‘God, this poor kid.’ But, I think, after I got the part, I then went back and read all four—I think only the first four had come out at that point—and I read them all back to back and just became obsessed. I would charge around my room, despite having been filming as him during the day, I would [Laughs] tell my grandma over at my hotel room in Newcastle where we were filming the scenes where the broom leaps up into my hand, and I would be going back to my hotel room at night and having wand fights with nobody. [Laughs] Oh, yes, it’s a pity I didn’t have a brother. Yeah. 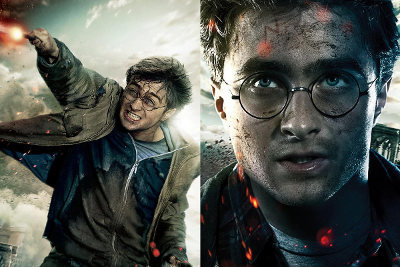 Q: Emma has been concentrating on college. Are you going to concentrate on your career?

Radcliffe: I’m gonna try to make a career for myself. You know, Emma’s the most academic cat of all three of us by quite a long way. [Laughs] So, I don’t think like university would have been on the cards for myself and Rupert. [Laughs] I found school very, very hard. I got good results most the time, but then I dropped out a year early because I was going to rehearsals for “Equus” and, to be honest, I think, well, I found something that I have some aptitude with, or I hesitate to say I’m good at because I’m so far away from being finished at art school and I’ve still got a lot to learn. But I certainly think I’m better at this than I would be at anything else. So I’m going to try and just focus on that and try and make as long a career of myself as possible.

Q: I imagine you just getting mobbed in the streets. Is the public used to you now?

Radcliffe: I think around my area they are quite used to me. It’s kind of, ‘Oh, there he is again.’ But, also, it’s the advantage of being 5’5”—no one really looks twice. If you’re just a skinny face in a crowd, it doesn’t attract too much attention.

Q: Was it ever out of control?

Radcliffe: Not really. Only in Japan. It went wild when I was in Japan. It’s amazing because it manages to be both aggressive and incredibly restrained at the same time. They will charge towards you, but it is like there is an invisible barricade two feet from you. And they will not go past that. It’s really incredible. It is like having some sort of force field to protect you. I mean, when I arrived in Japan when I was 13, there were five thousand people waiting in the airport arrival screaming. I mean, it was pretty intense. I am a Beatle in Japan.

Distributed by Warner Bros., “Harry Potter and the Deathly Hallows – Part 2” will be released in Philippine theatres and IMAX, in 3D and 2D, beginning July 14.