‘The Smurfs’– Out of Their Village, Into Our World!

The Smurfs arrive on the big screen in Columbia Pictures and Sony Pictures Animation’s hybrid live-action and animated family comedy in 3D, “The Smurfs.” When the evil wizard Gargamel chases the Smurfs out of their village, through a magical portal, and into our world, they land in the middle of New York’s Central Park. Just three apples high and stuck in the Big Apple, the Smurfs must find a way to get back to their village before Gargamel tracks them down. 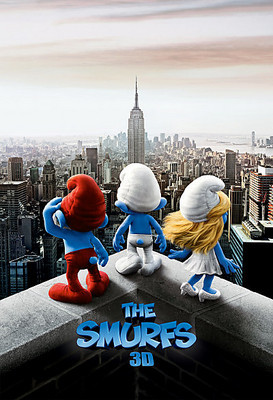 In 1958, a Belgian artist named Pierre “Peyo” Culliford created the Smurfs for a comic book. The “Schtroumpfs,” as they were called, were immediately popular – generating a wave of letters to the editor demanding more – and over the next fifty years, they became nothing short of a phenomenon, coming to life in comics, books, television series, films, videogames, live shows, and figurines (over 300 million sold). The characters’ cross-generational appeal has only grown as children who grew up on the Smurfs – including the Saturday morning cartoon – are now parents themselves and introducing their children to the Smurfs for the first time. 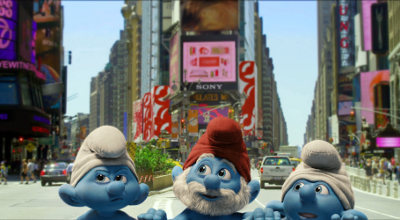 According to producer Jordan Kerner, it’s easy to see why the Smurfs have entertained people around the world for generations. It’s not just that they’re adorable – they also represent a type of humanity at its best. “The Smurfs are an analogy for a nation,” says Kerner. “They emphasize family and the importance of cooperation. More importantly, they always see the best in people first. The Smurfs really care for and look after one another.”

“It’s very much a Smurf-out-of-water movie,” says Raja Gosnell, who directs the film. “We took this Smurfy code of living and played it against modern-day New York City.”

Véronique Culliford, Peyo’s daughter, says that her father gave his creation a universal appeal. “The Smurfs are all very similar, but each Smurf is unique,” she says. “Everybody can recognize himself in one of the Smurfs. There is a Smurf for every personality. They are very kind, very social. They have all the qualities that people would like to have.”

As Culliford notes, some things change in life, but the Smurfs are a constant reference point. “The stories remain popular across the generations because people will stay people. We remain as we are and the Smurfs mirror us in our lives. We can adapt to the years, to different technology, but who we are is unchanged.”

Kerner adds that director Raja Gosnell’s expertise and gentle touch — not to mention his hands-on experience marrying live-action and computer animated characters in such films as “Scooby-Doo” and “Beverly Hills Chihuahua” – made him the perfect choice to direct. “I just have to say that Raja is one of the smartest, most intuitive, kindest, wonderful people to work with,” he says. “It was magical every day. We all wanted to make a film we would be proud of, and to help execute the vision he had for these characters.”

The family wanted to preserve the Smurf legacy as true to form as possible—and so did Kerner. “The most important thing,” Culliford adds, “is that the Smurfs stay the Smurfs. They’re leaving their village for the first time, which is exciting.

There are many questions that need to be answered in the mythology of the Smurfs and Kerner sees them being answered in the framework of a franchise. Who are the Smurfs, really, and Where do they come from? How did Gargamel get there and why is he such a sour puss? Why did he create Smurfette?

One of the many continuing traditions is the introduction of new Smurfs. The filmmakers had the opportunity to imagine three new Smurfs for the movie – Panicky, Crazy, and Gutsy, the last of which takes on a starring role.