Cameron Diaz Swears Up a Storm in ‘Bad Teacher’

In the film, Diaz is a foul-mouthed, ruthless, and wildly inappropriate teacher.

Some actors swear a lot as the cameras roll and, in most instances, those blue moments end up on the cutting-room floor. But not in the case of Columbia Pictures’ new comedy Bad Teacher, in which Cameron Diaz raises profanity to the level of high art in her title role. 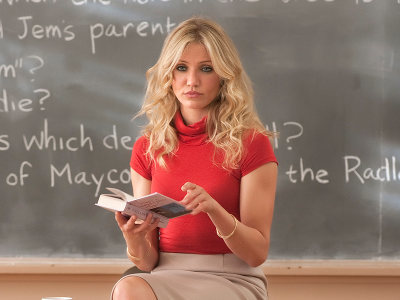 “It was all phonetic,” Diaz said, laughing. “We started with an `F’ and we ended up with a `K,’ and, apparently, if you put these other two letters in between, it makes a very funny noise … and people understand it.”

As Diaz explains, actors typically drop F-bombs on the set, even if it’s not in the script. “Then you’re, `God, you can’t say that. We can’t use that one,'” said the actress.

But in the making of “Bad Teacher,” Diaz said it was just the opposite: “You’re like, `More F-bombs, give it to us’ in this film. So to be able to be on set and have your director screaming that at you is a lot of fun. Everybody is just laughing.” 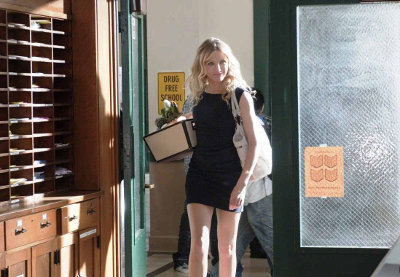 In the film, Diaz plays Elizabeth Halsey, a teacher who just doesn’t give an F. She’s foul-mouthed, ruthless, and wildly inappropriate. She drinks, she gets high, and she can’t wait to marry her meal ticket and walk away from her day job teaching middle school. When she’s dumped by her fiancé, she sets her plan in motion to win over a rich, handsome substitute (Justin Timberlake) – competing for his affections with an overly energetic colleague, Amy (Lucy Punch). Elizabeth’s outrageous schemes and their wild consequences will shock her students, her coworkers, and even herself.

“Bad Teacher” is a rare, R-rated studio comedy with a female lead. But with the subsequent success of “Bridesmaids,” another rare raunchy female comedy this season, the industry is likely eyeing the concept as Hollywood’s next hot genre. “It wasn’t a character that was originally written for a man and then made for a woman,” Diaz said. “It was conceived as a woman. And so, it is a lot of fun. I think it is funnier. If it was a guy, it wouldn’t be as funny. Guys don’t need to get (breast) jobs.”

The film reunites Diaz with former beau Justin Timberlake. And while Diaz and Timberlake had worked together post-breakup on the “Shrek” films, “Teacher” marks their first live-action effort together. “We were all like, `This is the right person for the job,'” Diaz explained. “Any worry that we had was like what the media was going to turn it into. Because we all know what they can turn it into.

“So we were very grateful that they didn’t, because there was nothing to make of it, other than two people working together, who just happened to have gone out in another time in our lives. So, it wasn’t a big deal, and we had a great time. And we did the job.”

As for Diaz’s own high-school past? She said she never was sent to detention. “I should have, but somehow, I always got away with it.”

Opening across the Philippines on August 31, “Bad Teacher” is distributed by Columbia Pictures, local office of Sony Pictures Releasing International.