Spacey, Farrell Are Masters of Intimidation in ‘Horrible Bosses’

Kevin Spacey and Colin Farrell are out to make the lives of their employees miserable in New Line Cinema's dark comedy 'Horrible Bosses'.

Kevin Spacey and Colin Farrell are out to make the lives of their employees miserable in New Line Cinema’s dark comedy Horrible Bosses. Spacey stars as Dave Harken, the control-freak megalomaniac, while Farrell plays Bobby Pellit, the unconscionable heir to his father’s company. 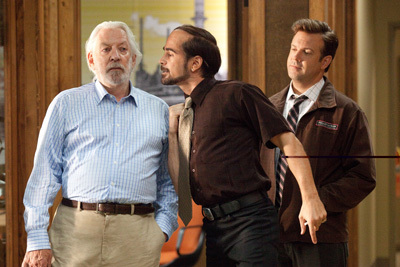 In the film, the only thing that would make the daily grind more tolerable for Nick (Jason Bateman), Kurt (Jason Sudeikis) and Dale (Charlie Day), would be to grind their intolerable bosses into dust. Quitting is not an option, so, with the benefit of a few-too-many drinks and some dubious advice from a hustling ex-con, the three friends devise a convoluted and seemingly foolproof plan to rid themselves of their respective employers…permanently. There’s only one problem: even the best laid plans are only as foolproof as the brains behind them.

The powerful, tightly wound VP Dave Harken lords over the cramped bullpen of Comnidyne Industries where poor Nick toils alongside his fellow corporate drones in the futile hope of reward and recognition… or, at the very least, an occasional half-day off. “Harken is the master of psychological torment,” says director Seth Gordon. “We imagined a kind of sophisticated passive-aggressive sadist, the kind of power-hungry micromanager that I think any of us can recognize because he exists out there in many forms, and Kevin handles it brilliantly.” 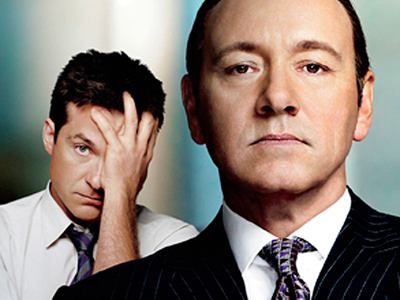 Says Spacey, “You can’t even give him the benefit of the doubt, or think for a minute that he’s being tough in order to teach a lesson or encourage his employees to try harder and bring out their best. There are no underlying strategies that might redeem him. Harken is just a bully. He’s a terrible, terrible person.

“The horrible bosses really back these three friends into a corner and I think audiences will completely understand why they’re driven to kill us,” Spacey concedes. “Fortunately, everything they set out to do doesn’t go the way they plan in any way, shape or form. They make the worst decisions ever.”

“Meanwhile, Colin’s Bobby Pellit represents the sort of corrupt and incompetent jerk who’s in charge of things but clearly has no idea what he’s doing. Of course, he will find a way to blame his inevitable failures on someone else,” says Gordon.
“Playing Pellit was all about channeling my inner douche,” laughs Farrell. “This guy thinks he’s God’s gift to women, God’s gift to intellect, to humor, to the club scene, to everything. It’s all part of his grandiose sense of self-esteem, which is probably masking a deeper sense of being a disappointment to his father and being riddled with envy over the relationship his father had with Kurt, and all kinds of other things. With Pellit, Seth gave me complete license to act as pathologically screwed up as possible.”

Farrell also contributed significantly to Pellit’s look, suggesting the comb-over and pot belly, as well as his affinity for the Chinese dragons that decorate his clothing to suggest to the world that he may have martial arts training. “Colin transformed himself so completely he’s barely recognizable,” Gordon attests. “He fully went for it. Audiences are going to see a whole different and very funny side to him.”

Opening across the Philippines on Sept. 21, “Horrible Bosses” is a New Line Cinema distributed by Warner Bros. Pictures, a Warner Bros. Entertainment Company.