X-Files' Gillian Anderson is Pamela Thornton, the no-nonsense head of MI7, who has guided the organization to new heights.

When it came to casting Johnny English Reborn, “authenticity” was a key word. Explains Parker: “I was keen to assemble the kind of team that if Daniel Craig had slipped into its ranks, they could all make a Bond movie together. The world I wanted Johnny to join was one in which the agents genuinely had a lot at stake, which puts all the more pressure on him to get things right and gives us all the more fun when he gets them wrong.” 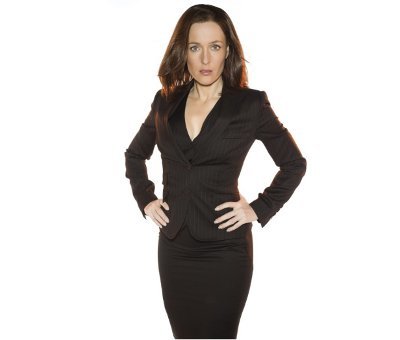 Best known for her groundbreaking role as the intense Special Agent Scully in the global hit The X-Files, Gillian Anderson accepted the role of Pamela Thornton, the no-nonsense head of MI7, who has guided the organization to new heights. The American actress had received rave reviews for her work in Bleak House and mastered the accent requisite of one of the most powerful women in British government service.

Anderson, best acknowledged for her work in Fox’s The X-Files, earned two SAG Awards, an Emmy and a Golden Globe for Best Actress in a Drama Series, and received numerous additional nominations. In 1998, she carried her role of Dana Scully over into the motion-picture adaptation based on the show, The X-Files: Fight the Future. In 1999, she made The X-Files history by becoming the first woman to write and direct on the series, on an episode titled “All Things.” In 2008, Anderson reprised her role once again in The X-Files: I Want to Believe. 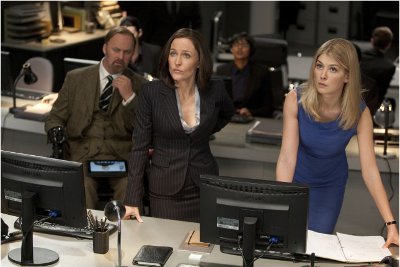 Anderson was a fan of Atkinson’s comedy, and to play the head of MI7 was an enticing prospect. Recalls the actress: “When I saw the first film, I started laughing from the title sequence. There is just something about Rowan’s timing. I find him endlessly funny. The opportunity to do comedy on a big scale and the chance to work with and observe Rowan’s process were just too good to miss out on.”

Her fellow performer returns that he enjoyed what the actress brought to the role of the tough-as-nails Pegasus. “Gillian brings hardness, credibility and a bite to Pamela,” enthuses Atkinson. “You believe that this woman is in charge and is not going to take any prisoners, and she is not going to tolerate any silliness from Johnny English.” 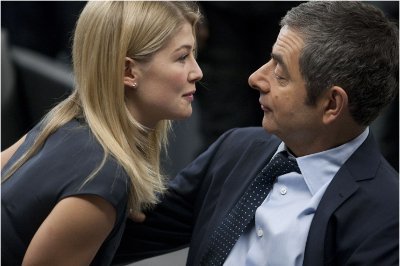 In the role of the MI7 behavioural psychologist Kate Sumner, the filmmakers cast Rosamund Pike, known for her memorable turns in Pride & Prejudice, An Education and Made in Dagenham and, most recently, in Barney’s Version. It was important for the filmmakers that the audience believe the romantic connection between the fetching Kate and the awkward English, and Pike was just the performer to pull it off.

Explains Parker: “Johnny is flawed in countless areas, but he also has a great sense of loyalty. Somewhere in him you know there’s a capacity to be a hero. And it is Kate who sees this side of him. The great thing about Rosamund as an actress is that she is very interested in what makes people tick. You can see she is fascinated by the quirks of Johnny’s character, and this curiosity and empathy give us the chance to believe in their romance.”

Atkinson found that Pike brought genuine empathy to the role. He adds: “She has to fall in love with this total klutz. That’s quite a difficult thing to play when you’re dealing with someone who clearly has failings, which Johnny does in spades. What Rosamund made work was the credibility to believe that here was a decent guy who does mean well and tries hard to do his best.”

Pike researched the role by reading a good deal of material on behavioural psychology, including books by the FBI and anthropologist Desmond Morris. “It’s a fascinating subject,” she notes. “Kate’s job is to read people’s expressions and interpret their behaviour for MI7. When she meets Johnny she finds him a captivating study…with his curious facial expressions and body ticks. She sees the honesty that is at the core of his character, and she finds it refreshing and adorable.”

Now showing across the Philippines, “Johnny English Reborn” is released and distributed by United International Pictures through Solar Entertainment Corporation.