Michael Peña is the Hit Man in ’30 Minutes or Less’

Peña based some of his mannerisms and vocal inflections on a guy he knew back home. 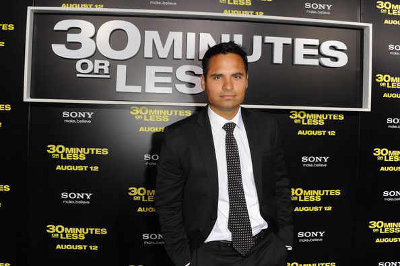 In the film, Nick (Jesse Eisenberg) is a small town pizza delivery guy whose mundane life collides with the big plans of two wannabe criminal masterminds Dwayne and Travis (Danny McBride and Nick Swardson). The lowlifes kidnap Nick and strap a time bomb to him – with the promise that they’ll blow him up unless he robs a bank. With only a few hours to pull off the impossible task, Nick enlists the help of his ex-best friend, Chet (Aziz Ansari). As the clock ticks, the two must deal with the police, hired assassins, flamethrowers, and their own tumultuous relationship.

As the bad guys Dwayne and Travis put their plan into motion, they instantly get in over their heads as they embroil a small-time assassin, Chango. “When we met him, Michael came in with that character – the voice, the accent, everything,” says director Ruben Fleischer. “I was blown away by how original it was, and that’s pretty much the character he ended up playing in the film. Typically, these assassin or hit man characters can be one-note, but Michael’s portrayal of Chango is anything but.” 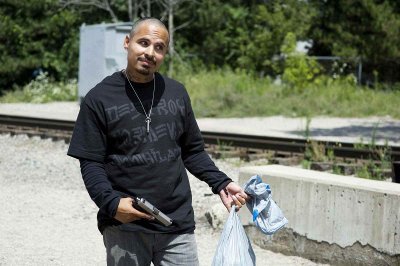 “My character is a guy from Detroit – not unlike some of the guys I grew up with in Chicago,” he notes. In fact, Peña based some of his mannerisms and vocal inflections on a guy he knew back home. “When I read the script, it struck me how real the character was, because I know a guy just like that.”

“It is such a pleasure to watch an actor create a character that is everything that it was on the page, plus so much more,” says producer Stuart Cornfeld. “The dramatic intensity of the character is heightened all the way to a comic reality.”

“I don’t really get to play gangsters, believe it or not,” Peña continues. “I go to auditions and I see people who actually have been to jail – they have the tears and the scars on their faces – and I went to prep school, you know what I mean? It doesn’t really work out.”

As much as his fellow cast members were blown away by his performance, so too was Peña gratified by the chance to work with his co-stars. “I actually had Aziz Ansari’s CD in my car – I was driving to the set, laughing at his jokes,” he says. “I almost felt like that Chris Farley character – I’d go up to him and say, ‘Remember when you said – ’ and I’d totally mess up the joke, and he’d respond, ‘Yeah, I wrote that, man. It’s cool.’”

Michael Peña has distinguished himself in Hollywood as an actor with a wide range of performances who has worked with an impressive roster of award winning directors. Peña earned notable recognition for his performance in Paul Haggis’ provocative Oscar® winning film “Crash,” alongside Don Cheadle, Matt Dillon and Terrence Howard. Critically acclaimed for the film’s interpretation of complex race relations in contemporary America, Peña has garnered multiple best ensemble nominations for his role as Daniel the locksmith, winning awards from the Screen Actors Guild and the Broadcast Film Critics Association for the cast’s performance.

He is currently shooting the ensemble feature “The Gangster Squad” opposite Sean Penn, Josh Brolin, Ryan Gosling and Emma Stone. The film is set in the 50’s chronicles the LAPD’s fight to keep the East Coast Mafia out of Los Angeles.

Opening across the Philippines on Oct. 12, “30 Minutes or Less” is distributed by Columbia Pictures, local office of Sony Pictures Releasing International. Visit www.sonypictures.com.ph to see the latest trailers, get free downloads and play free movie games. Like us at www.Facebook.com/ColumbiaPicturesPH and join our fan contests.