Hayek was thrilled to voice the strong, independent and funny feline.

Academy Award Nominee Salma Hayek has proven herself as a prolific actress, producer, and director, in both film and television. She received an Academy Award Nomination, a Golden Globe Nomination, a SAG Nomination, and a BAFTA Nomination for Best Actress for the title role in Julie Taymor’s “Frida.”   Hayek is currently filming Oliver Stone’s “Savages,” with Benicio del Toro, John Travolta, Uma Thurman and Blake Lively. Hayek now lends her voice in DreamWorks’ Puss In Boots, a prequel of sorts to “Shrek 2,” as Antonio Banderas’ love interest, “Kitty.” 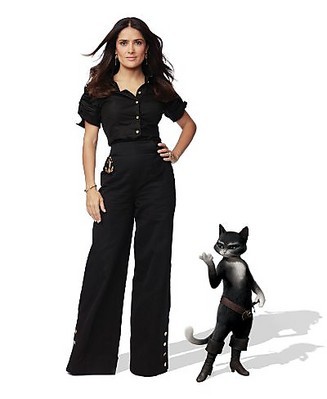 “Salma Hayek is Kitty Softpaws,” supplies Director Chris Miller, “and in her performance, she’s beautiful, strong and sensual, but most importantly, she’s funny—Salma’s a really funny actress and she gets to really show that off in this. Because she brings this working relationship with Antonio to the character [this is their fifth film together], it feels really authentic. You can tell that they are good friends, because they fight really well together, which brings sparks to their onscreen romantic relationship. They’re a great duo. I love Salma’s voice, it’s rich and deep, and it works so well for Kitty,” Hayek was thrilled to voice the strong, independent and funny feline: “Everything about this film is fun and exciting. To start with, it’s the first time I’ve worked with animation, and I’ve been wanting to do one for a long time. It could not have come at a better time, because now I get to share this one with my daughter. I have become an animation expert since she was born…and I say with a lot of pride that even though I think I’ve seen every animated movie that’s ever been done, I think this one’s in the top ten for sure.”

There were logistical points that also worked for Hayek: “There was a convenience that I really liked. I could work in my pajamas. And because I travel a lot, I was able to record in about five cities.” Hayek loved her character and describes her: “She’s a very good verbal fighter, and also a very good physical fighter. She’s also an amazing thief, one of the best that are out there. And she’s proud of it. I enjoy that she always wins, and that she’s always right. And even though Puss keeps fighting her and continues to try and prove her wrong, he can’t. It’s really a joy to be this kind of a cat.”

So symbiotic is the back-and-forth performance between Banderas and Hayek that Antonio made a request of the filmmakers. “I’ve worked with Salma since the beginning of the ‘90s, and she’s a dear friend. Normally, in animation, we work alone. But this is the only time that I asked for a session with an actor, because with Salma, I know that we have such chemistry, and especially, we fight very well on camera. We have a kind of rhythm and we can improvise. So I asked them to bring her here with me, and we did a session together. And we got a number of things from it. It was great to work with her again.”

“Antonio is wonderful in this role,” responds Hayek. “He was born to play this cat. We’ve been working together for a long time, and we’ve done many movies together. It’s always a pleasure and a joy. We were lucky to have a recording session together, even though they usually don’t happen – everybody’s so busy and in different places, but we managed to schedule it. We were both improvising and some of the stuff that we did actually ended up in the film. He is so much this character, and I know him so well by now, that when I was recording without him, I could feel him there like a ghost saying the other lines. I love him in this part, and know exactly what he would say as Puss, even when he is not in the room.”