The Songs of ‘New Year’s Eve’

Because it wouldn’t be a New Years’s Eve party without memorable music, audiences of New Line Cinema’s upcoming romantic comedy New Year’s Eve will see Jon Bon Jovi—as rock star Jensen—cover Otis Redding’s “I Can’t Turn You Loose” on the Times Square stage, and John Hiatt’s “Have A Little Faith in Me” in the more intimate setting of the masquerade ball. 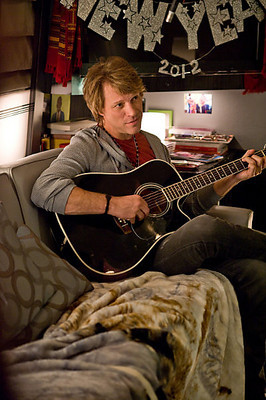 Grammy Award-winning music producer Don Was produced both songs with Jon. Based on recordings of Bon Jovi performing the songs in concert, he explains, “We shaped the tracks around what Jon would do and then went in with [director] Garry Marshall and got the performances they needed for the film.”

Also, Lea Michele delivers a stirring rendition of the New Year’s classic “Auld Lang Syne,” produced by “Glee” music producer Adam Anders.
Recalling how Bon Jovi worked with the filmmakers on song selection, producer Wayne Rice says, “He came to the table with some songs that fit the themes of his story and spoke of love and optimism, moving forward, the things we would associate with New Year’s Eve.” 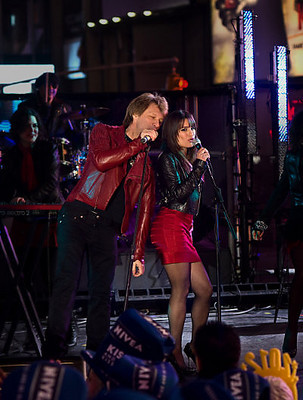 “Garry wants to deliver an experience for audiences that’s fun and fulfilling, and he gravitates towards themes and stories that serve those values. He really believes that when people go to the movies they deserve a break, they deserve a happy ending,” says producer Mike Karz.
“No matter what they tell you, New Year’s Eve is about hope,” Marshall concludes. “A lot of people think about who they’re going to kiss at midnight, who they’re going out with, where’s the best party, and all of that. For others, well, they have other concerns. Maybe things haven’t been going so well. You make plans and sometimes they fall through, and those are some of the things we look at in the movie.

“The fact is, New Year’s Eve means something to a lot of people all around the world and watching that countdown is a shared moment. That’s what I love about it.”

“New Year’s Eve” celebrates love, hope, forgiveness, second chances and fresh starts, in intertwining stories told amidst the pulse and promise of New York City on the most dazzling night of the year.