He is Paul, a confident young bike messenger who shares an adventure on the last day of the year with Ingrid, a shy and overlooked secretary.

Zac Efron joins the ensemble cast of Gary Marshall’s holiday-themed comedy New Year’s Eve as Paul, a confident young bike messenger who shares an adventure on the last day of the year with Ingrid (Michelle Pfeiffer), a shy and overlooked secretary. 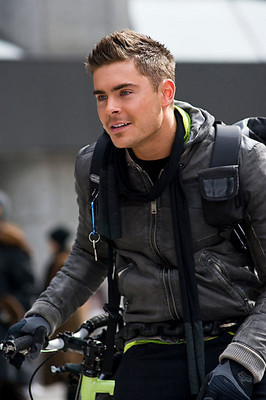 The young actor shares his thoughts on the film and the beloved holiday as he answers these three questions:

Q. Your character, Paul, is extremely fun loving. He meets the opposite of him in Ingrid. Paul really helps her come out of her shell, doesn’t he?

Zac Efron: Yeah. Paul is just this energetic, kind of cool, fun-loving character. I dunno, he’s like me on a good day (laughs). He just wakes up and he’s very excited about New Year’s. You can tell he just wants to party, he’s all about having fun. He meets his counterpart on New Year’s Eve, Ingrid is this very closed lady. You can tell she has probably never really celebrated New Year’s, ever. She’s just so quiet and meek. I dunno, I guess they just latch onto each other. Their fates are intertwined. Ingrid tells Paul that he can have 4 tickets to this midnight New Year’s Eve ball, if he helps take her around New York and helps her complete her list of resolutions – which she hasn’t completed in God knows how many years. And she came to the right place, because Paul’s the man (laughs), he can take care of anything. So he takes on this challenge and pretty soon they’re jetting off to all 5 boroughs on a Vespa, taking care of these resolutions. And some of them are pretty impossible, so Paul has to use his imagination, he can’t just take everything too literal – he’s gotta improvise! 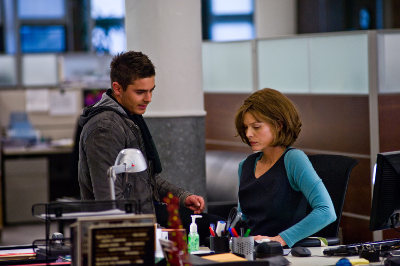 Q. I heard you and director Garry Marshall had a code word during the shoot?

Efron: (Laughs) The first thing Gary asked me wasn’t about character or motivation, it was, “What’s our code word?” I’m like, “Code word!?” He’s like, “Yeah, you’ve gotta give me a code word, so if you need anything you just say the code word. Then I can talk to you in private.” I’m like, “That’s brilliant, a code word?” He goes, “Where are you from?” I reply, “San Luis Obispo,” and he goes, “That’s the code word, anytime you need to talk to me, just say San Luis Obispo.” I was like, “I love this guy,” (laughs) he’s just awesome, really cool.

Q. Do you have your own New Year’s resolution, or personal goal?

Efron: My resolution is to just stop talking about going and doing things, all the adventures I want to have in life, and just really go and do them. I’m 24, I’m not getting any younger. I want to go climb all these mountains, I wanna hike the Appalachian Trail, I still haven’t gone sky-diving – I promised myself that I’d go sky-diving when I was 18, and I still haven’t done that. I wanna check out China, India, there’s all these things I wanna go do. So I’d say that’s my resolution, just to go and get lost, do some Indiana Jones stuff (laughs).

“New Year’s Eve” celebrates love, hope, forgiveness, second chances and fresh starts, in intertwining stories told amidst the pulse and promise of New York City on the most dazzling night of the year.