The latest installment is an action-packed thrill ride, filled with mind-boggling stunts and rich characters. 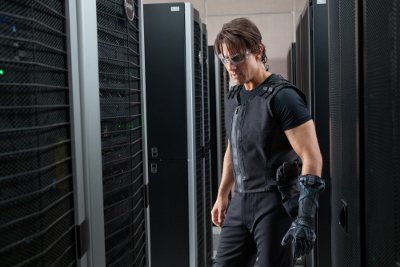 In an action packed scene, Ethan (Tom Cruise) slips out of a fourth-story window and, while Russian operatives wait for him to give up, grabs his belt, leaps from the building ledge, slides down a nearby power line to the roof of a moving van and rolls off safely onto the street. “That was actually one of the most challenging stunts of the whole movie, as far as difficulty goes,” says stunt coordinator Gregg Smrz. “We rehearsed that on stage over and over and over, until it was just old hat, and then went and put it into place. Tom nailed it in just a few takes.”

The key word here is: “Tom.” That stunt – only a sign of things to come for the audience as they watch the rest of the film – was performed by Cruise himself as was the case throughout the movie. “Tom wants to do everything,” says Smrz, “even when he doesn’t have to. There are shots where the producers were really getting nervous, and he wanted to take it further and further. I told him, ‘Tom, nobody is going to know it’s not you. There’s no reason for you to do this – your double could do it and you can watch.’ He just looked at me and said, ‘But I’m having fun.” 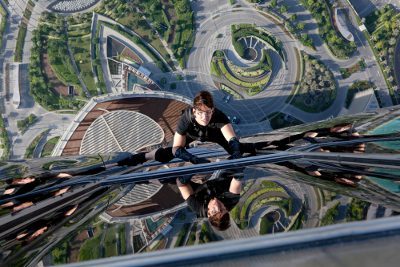 Director Brad Bird concurs: “I agree with Tom that when the real guy is there, you get something extra, and the audience can feel it. It’s not just that you’re seeing the actor’s face, but somebody like Tom adds intensity to it because he’s an actor. When he falls, he shows you the fear of somebody who’s suddenly being dropped. It’s a performance and I think people can tell the difference.” Cruise is intimately involved with every step of the stunt process. “He loves action films, and he takes them very seriously and does his homework,” says Bird. “He’s a stunt coordinator’s dream because he invests himself completely. He wants to understand every aspect of how you execute a stunt, how it’s planned. By the time the day arrives to do the stunt, he’s completely prepared. He’s made to order for this kind of movie.” Adds Paula Patton, “It’s why he’s the perfect Ethan Hunt. He’s fearless. He lives for danger and excitement and doing the impossible, which he’s done his whole career.”

The rest of the cast followed Cruise’s example, both in work ethic and in the desire for a realistic experience for the audience, performing many of their own stunts as well, particularly in the fight arena.

Another intensely complicated stunt sequence in the film, involving one of the most complex sets ever built for an action movie, appears as Ethan fights with Kurt Hendricks (Michael Nyqvist) to recover the cheget, the Russian nuclear launch briefcase, to prevent the start of a nuclear holocaust. The two battle it out in an old-fashioned fistfight in a 3D automated parking garage with machinery and automobiles constantly on the move.

“That went along with our desire for this movie to not fire a lot of guns and unleash a ton of ordinance,” André Nemec explains. “Josh and I talked about setting an old school fistfight in a crazy environment. I recalled a conversation I had with an architect friend, who told me about these automated parking garages. So, Josh and I went online and found one that VW had. We were looking at pictures of it and thought ‘This literally could be the most insane environment for a brawl,’ then pepper in playing hot potato with a nuclear briefcase – wild.”

Special Effects Supervisor Mike Meinardus and his crew then spent the next six months building the set, which was fully operable. The structure held the 35,000 pound, 78 foot tall center column, supporting two 23 feet paddles, each of which weighed over three tons. The completed set held about 70 cars, 18 on each level, which were best set in place using the machinery Meinardus had built to use shooting the scenes – the paddles themselves.

The action for the incredibly complex sequence was mapped out by Brad Bird in an animatic; a simplified animation used to plan each step of the sequence. “It’s an extraordinary exercise in three-dimensional thought,” says Bissell. “It’s a tremendous testament to Brad’s ability to introduce the geography of the set,” co-producer Tom Peitzman adds. That trait, no doubt, comes from the director’s keen ability to visualize the way he would in animation, producing the kind of fantastical shots Bird is known for. But for MISSION: IMPOSSIBLE, the director took the kind of approach necessary for live action stunts. “He didn’t want things just to be magical,” says Burk. “He wanted everything to feel authentic and real.”

For that, Bird wisely turned to his visual effects supervisor and stunt coordinator for advice, both of whom were eager to pull off what Bird envisioned, while still helping him stay in the realm of reality. The two would negotiate with Bird to hit the mark. The shots were rehearsed with Cruise’s stunt double, to plan out camera moves and program the operation of the paddles, but filmed, of course, with Cruise and Nyqvist doing their own work in every shot. An immense amount of care was taken to protect the actors in the dangerous maneuvers with the operating paddles and the minimal deck surface to stand on between cars. “Each paddle weighs 6700 pounds and there’s only about ½ inch clearance between the paddle and the decks, so it’s like a giant sheer,” says Meinardus. “When it was running, we’d have sirens and safety meetings, to make sure that nobody was rappelling between there.” Adds Bird, “It was a great tribute to the whole team to pull that off because it takes incredibly precise coordination.”

The pair of actors were suspended from cables, picked to the ceiling of the warehouse, as well as to the ends of the paddles to prevent accidental falls between vehicle platforms and to guide planned jumps. Cruise, at one point, makes a three-story leap from a deck level into a car on a moving paddle, slowed at the end of his fall by a decelerator. “It was very challenging work, coordinating their moves and finding safe places to set the cameras,” says 2nd unit director Dan Bradley, who shot the sequence. 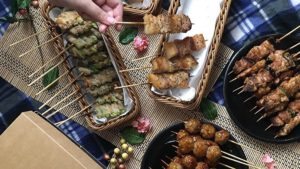