He has solidified himself as a global box office success with gross film revenues in excess of 2.1 billion dollars worldwide with such blockbusters as “Fast Five,” “The Rundown,” “The Scorpion King” and “The Mummy Returns.” Now, Dwayne Johnson stars in another potential megahit, New Line Cinema’s 3D family adventure Journey 2: The Mysterious Island. 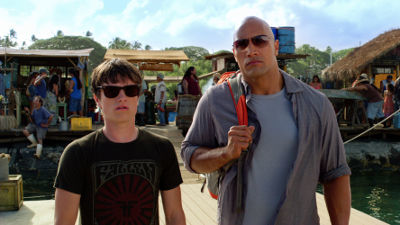 The film begins when seventeen-year-old Sean Anderson (Josh Hutcherson) receives a coded distress signal from a mysterious island where no island should exist. Unable to stop him from tracking the signal to its source, Sean’s new stepfather, Hank (Johnson), joins the quest that will take them first to the South Pacific, and then to a place few people have ever seen. Or lived to tell about. It’s a place of stunning beauty, strange and threatening life forms, volcanoes, mountains of gold and more than one astonishing secret, in this follow-up to the 2008 worldwide hit “Journey to the Center of the Earth.”

Johnson plays Hank, a Navy vet who runs his own construction company and is accustomed to tackling things head-on and fixing problems. But can’t quite figure out a way to fix the situation with his stepson, Sean. “Like a lot of teenagers—and I was no exception—Sean thinks he has all the answers,” Johnson says. “He’s experienced a lot of abandonment between the loss of his father and his grandfather’s travels, so he is naturally wary when this new father figure comes into his life. Hank and Sean are at odds from the beginning, as one wants to connect and the other wants to distance himself.” 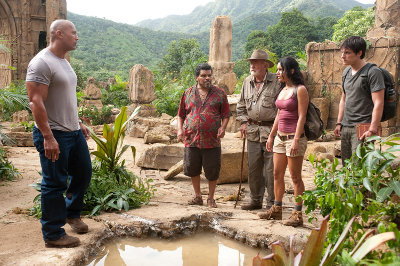 Johnson continues, “Family is one of the most important thing to Hank, and his intention throughout the story is to make his family whole again.”

“Dwayne brings so much to every role,” notes director Brad Peyton. “With his million dollar fists and billion dollar smile, he could carry a movie just on his action chops alone but he also has impeccable comic timing and he’s endlessly charismatic. I wanted everything—the whole Dwayne Johnson experience—for this movie, and he brought it all. He even sings…who knew? And plays the ukulele.”

But as noble as Hank’s intentions are, Sean feels he’s to blame for everything wrong with his life right now. More importantly, he’s sure to be the immovable object standing between Sean and the exploration the young man considers his birthright.
That assumption will be tested sooner than Sean thinks when he receives a strange radio call one night. It’s an encrypted S.O.S. that he suspects may be from his grandfather, Alexander, who hasn’t been heard from since he set out to prove that the Mysterious Island in Verne’s novel was fact and not fiction.

Its first four words are electrifying. THE ISLAND IS REAL.

“Alexander is Sean’s idol. He’s pretty much always done whatever he wanted, and he’s always off on some crazy expedition,” says Hutcherson. “If Alexander is in trouble, Sean will do anything to reach him.”

Likewise, Hank will do anything to reach Sean, even if it means accompanying him to the South Sea on what he believes can only be a wild goose chase, feigning interest in the unlikely yarn about an island that history forgot, just to keep an eye on him. But days later, after a harrowing crash-landing in the most unbelievable place he’s ever seen, no one is more surprised than Hank.

While the island unites them in a single goal, it underscores the fact that their individual reasons for being there are widely different. “But it’s the developing relationship between Sean and Hank that anchors everything else and serves as our way into the story,” cites Peyton, who opted for a light touch in showing how these two ultimately find their way toward an understanding.

“Sometimes in the development of a script there’s the temptation to oversell the character beats and arcs,” producer Tripp Vinson offers. “But in the hands of talented actors like Dwayne and Josh you can allow those revelations to emerge through their performances.”