Vanessa Hudgens doesn’t sing while on camera in 'Journey 2' but makes up for it behind the scenes.

The young star of the “High School Musical” films, Vanessa Hudgens doesn’t sing while on camera in New Line Cinema’s action-adventure Journey 2: The Mysterious Island, but makes up for it behind the scenes. “She’s always dancing,” co-star Josh Hutcherson points out. 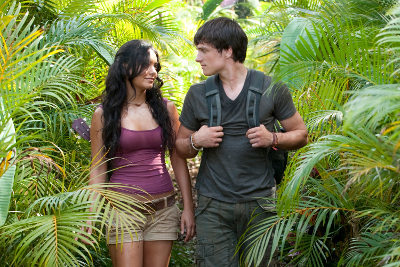 “And singing,” Hudgens pipes in. The young actress describes her character, Kailani, as “very fun. She’s an island girl. She kind of gets sucked into this adventure against her will, but through Sean (Hutcherson) she opens up her heart because she’s really ruled by her head.” 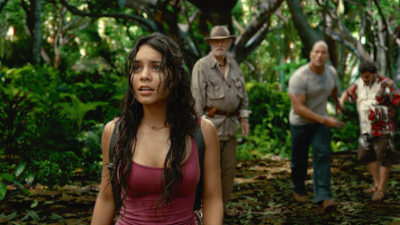 The follow-up to the 2008 worldwide hit “Journey to the Center of the Earth,” “Journey 2: The Mysterious Island” takes moviegoers on a fun and fantastic new adventure to parts unknown, a place so remote it has lain hidden for centuries … and, when found, is almost impossible to escape. The film also stars Dwayne Johnson and Michael Caine.

Kailani is also the only young woman on the adventure, “So, it’s my job to look out for the boys. It’s awesome. I mean everybody’s so amazing. I really get along with the guys.”

Kailani is part of the father/daughter helicopter team who flew Sean and Hank (Johnson) to the island from nearby Palau, New Guinea, in a blinding hurricane that has destroyed the copter and left them all stranded together.

But Kailani’s father, Gabato (Luis Guzman) is really just a doting father, striving to give her what she wants most: the means to go to college. Kailani, in turn, loves him dearly and appreciates his efforts but doesn’t actually expect their marginal enterprise to bring in the funds to finance that dream. Truth is, Dad isn’t much of a businessman, and Gabato’s Luxury Tours would likely not survive without her help.

Watching them interact is both touching and funny. “Vanessa flawlessly plays straight man to his craziness,” says producer Charlotte Huggins. “She never reacts to him, which is exactly what you would expect from someone who has lived her whole life with a man like this. She’s beyond reacting. He says something outrageous and then moves on to the next thought, and so does she. They were perfectly in tune.”

“Kailani is tough because she has to be,” says Hudgens. “She looks after her father. She’s also very outspoken, and, from the start, the one thing she’s been most outspoken about is how this job was a bad idea.”

And, mere minutes into their charter flight, it appears that she was right.

Not only did the helicopter accident destroy the group’s only means of transportation, it also seems to have destroyed any chance the instantly-smitten Sean hoped he had to catch Kailani’s eye. Instead, he catches only the Polynesian beauty’s ire as she vows to hold him personally responsible for this and all other calamities that lay ahead.

“Sean is a dreamer and Kailani is far more practical. He wants her to get into the spirit of this great quest but she’s just focused on the risks,” Hutcherson explains.

Having sized up the American teen before he stepped foot in the copter, Kailani is convinced he as wouldn’t have the slightest idea what her life is like and what her problems are. But as events unfold, she begins to wonder if she might have been mistaken, especially as they quite literally can’t avoid falling into each other’s arms with each surprise the island tosses up. “Embracing this experience and everything it offers means she’ll have to open her heart and Kailani has always been ruled by her head,” says Hudgens. “But she gets pulled into this incredible world and ends up finding more than she expected.”

Opening across the Philippines on Thursday, Feb. 2 in IMAX 3D, Digital 3D and regular theatres, “Journey 2: The Mysterious Island” is distributed by Warner Bros. Pictures, a Warner Bros. Entertainment Company. 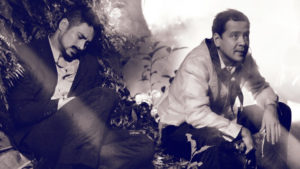