He is Thomas Schell, a devoted husband and father who was at the wrong place, at the wrong time during the fateful day of 9/11.

Two-time Academy Award winner Tom Hanks stars as Thomas Schell, a devoted husband and father who was at the wrong place, at the wrong time during the fateful day of 9/11, in Warner Bros.’ life-affirming drama, Extremely Loud & Incredibly Close. 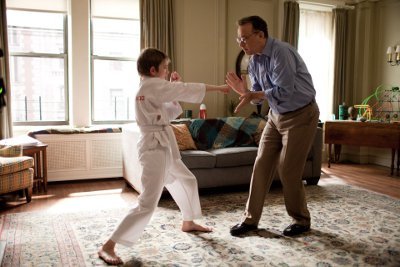 The film is a story that unfolds from inside the young mind of Oskar Schell (Thomas Horn), an inventive eleven year-old New Yorker whose discovery of a key in his deceased father’s belongings sets him off on an urgent search across the city for the lock it will open. A year after his father died in the World Trade Center on what Oskar calls “The Worst Day,” he is determined to keep his vital connection to the man who playfully cajoled him into confronting his wildest fears.
As a screen character, Thomas Schell was a challenge because he is seen entirely through Oskar’s eyes, to the extent that much about his history and inner life remain mysterious — except for the parts that have made an impression on Oskar and especially Oskar’s memories of their very best times together, which remain indelibly immediate to him.

To embody the essence of a father as captured in time by his young son, director Stephen Daldry thought early on of Tom Hanks. “We thought that in terms of Oskar’s memories of Thomas as the perfect dad…well, who else could that be but Tom Hanks?” recalls Daldry. “Tom took that responsibility to heart and created a real bond with child actor Thomas Horn that was evident to everybody on the set. They were absolutely charming together, which was great for me as a filmmaker, because they created this dynamic relationship and all I had to do was shoot it. It was an act of real dedication by an extraordinary actor and collaborator.” 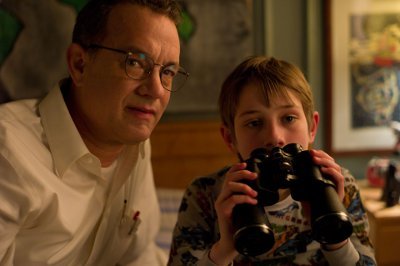 Hanks was drawn to the way the script gets inside Oskar’s mind at a time when the power of logical facts to keep him grounded seems to have evaporated. “In the blink of an eye, the course of Oskar’s whole world changes, and he loses his only anchor,” Hanks says. “His father used to tell him that there are always clues and treasures to be found in the world. So when he finds his father’s key, it’s very interesting that Oskar devises his own elaborate hunt for what the key might mean, convinced it will somehow explain the unexplained to him. It becomes a very personal, intimate story of a kid trying to make sense in his own way of a nonsensical world.”

He adds: “It was easiest thing in the world for me to want to do this – as soon as I read it, there was not even any question.”
The actor says he gave a lot of consideration to the kind of father Thomas was to Oskar prior to his death. He also kept in mind that Thomas was himself a child of immigrants who took up the trade of jewelry as his only clear opportunity to support his family, even though he dreamed of being a scientist. “I think Thomas was someone who felt the real task in his life was to make sure that his very bright son became a well-rounded, content human being who might make the world a better place,” Hanks says. “Since Thomas himself grew up without a father, fathering Oskar was the most important thing to him. I think he loved inventing wild stories for Oskar, like the one he makes up about New York’s lost Sixth Borough, but he also very clearly designed these stories to get Oskar out in the world and help him feel safe there.”

In part, Hanks drew on his own experiences as a father. “The emotional part of it for me was going back and remembering what it’s like to have an 11-year-old kid who is bubbling over with life,” he says.

While Hanks believes Thomas was well aware that Oskar often showed signs of behavior akin to Asperger’s Syndrome, he also says Thomas readily accepted and even related to many of his son’s oddities and phobias, which made the two of them even closer. “I think Thomas wasn’t bothered at all by his son’s behaviors,” he says. “Instead, he looked for ways to build bridges over Oskar’s turbulence, over his constant questions, his flights of fancy and his fears. Yet because of that, when he’s gone, it magnifies the incredible loss for Oskar even more.”