‘Ghost Rider: Spirit of Vengeance’ Rolls to the Screen in 3D 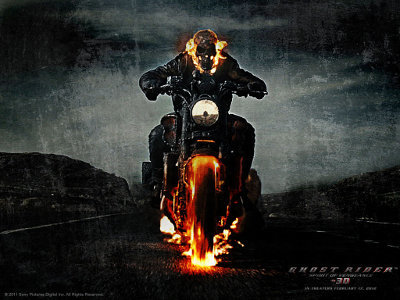 “The movie for us was always going to be in 3D, from the very beginning – we love making the movie a more immersive experience. It seemed like a really cool idea, especially with our style of shooting,” says co-director Brian Taylor. “We tried to push the envelope with the technology. The first thing they told us was all the things we couldn’t do – no handheld camera, no quick cuts, no lens flares, no soft foreground, no super-long lenses, no super-wide lenses… and we asked, well, why?”

“There are rules, and directors Mark [Neveldine] and Brian wanted to break those rules, so it was my job to break them,” says stereographer Craig Mumma. “We wanted to take their style and adapt it to the screen and make 3D an enjoyable experience. The way Mark and Brian shoot, the camera work is an integral part of the movie, almost like another character. There’s no changing the way they shoot, so we had to come up with tools to adapt.”

In the film, Johnny (Nicolas Cage) – still struggling with his curse as the devil’s bounty hunter – is hiding out in a remote part of Eastern Europe when he is recruited by a secret sect of the church to save a young boy from the devil. At first, Johnny is reluctant to embrace the power of the Ghost Rider, but it is the only way to protect the boy – and possibly rid himself of his curse forever.

Neveldine/Taylor’s extreme filmmaking required a story that broke new ground as well. It wouldn’t do to simply pick up where the last film left off. “This story takes place years later, when Blaze – and the Ghost Rider – are in an entirely different place,” says producer Ari Arad. “Johnny Blaze is now miles away from his place of birth, trying to run away from the demon inside him. In comes a priest, Moreau, played by Idris Elba, who promises to help Johnny – if Johnny can help find a certain boy. If Johnny can find the boy and save the child’s soul, he might be able to save his own soul as well.”

Opening across the Philippines on Friday, Feb. 17 in digital 3D and regular theaters, “Ghost Rider: Spirit of Vengeance” is distributed by Warner Bros. Pictures, a Warner Bros. Entertainment Company.