Ascending Talents in ‘The Descendants’

The movie stars Shailene Woodley and newcomer Amara Miller as the daughters of this year’s Oscar contender for Best Actor, George Clooney.

The Descendants showcases breakthrough performances from Shailene Woodley and newcomer Amara Miller as the daughters of this year’s Oscar contender for Best Actor, George Clooney. 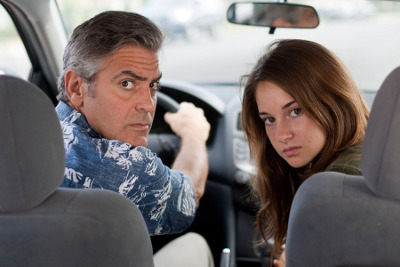 In the depths of a crisis following a boating accident of Matt King’s (Clooney) wife, King has to come to terms with the fact that he has been largely inadequate as a father as he attempts to repair his relationship with his two daughters. Lack of parental support and stability have left both girls without direction. Alexandra (Shailene Woodley) is rebellious and has been sent off to boarding school. 10 year-old Scottie, played by first time actress Amara Miller, is precocious and in need of parental supervision.

Woodley plays 17-year old Alexandra, troubled daughter of Matt King (Clooney) who has to help her father come to terms with his wife’s coma – and her secrets. 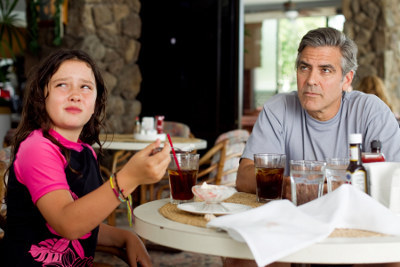 Woodley is best known to US audiences for her performance as Amy Juergens in long-running TV series The Secret Life Of The American Teenager, for which she has received particular praise – including being named ‘Breakthrough of 2008’ by the magazine Entertainment Weekly.

Q: How would you describe your character, Alexandra?

A: I’d say she’s kind of a normal teen going through her angsty period in life and as a child she realized her Mom was going to be more of a best friend than an actual mother. And that her Dad was far removed and would show up for but not really have any communication within the family. So she built walls up and kind of became her own protector. She became very independent at a very young age.

Q: Could you relate to the character?

A: Yeah, of course, I went through my angsty period. I was probably about 14/15 when I hated the world, but that went away quickly and I didn’t really pull from my childhood for this character. For me acting is just about being yourself in the colors and restrictions of a particular character. I try not to pull from my own life or think about it too much. I’d rather just stay present to the situation in which the characters are being forced through.

A: I wasn’t really nervous until he walked into the room for the table read in Los Angeles. I started sweating and shaking. Then he came up to me and gave me a big hug and he said “Welcome, Sweetie” and immediately the intimidation factor just disappeared. He’s so great. He’s just George Clooney, a guy from Kentucky with a heart of gold. He’s a spectacular human being on every level.

Q: The scene when you are filmed underwater, after you hear some bad news about your mother, must have been challenging.

A: I loved the underwater scene. I was literally born under water. I learnt to swim at one year old. Water is my personal comfort zone. In Hawaii, girls and guys alike learn to swim before they learn to walk. So I thought it was beautifully written that after hearing such tragic news she recedes into the water and has her moment to be vulnerable for the first time. I thought that was beautiful and then for me, selfishly, it was my own therapy session. I got to go under water and scream.

Q: Shailene is quite an unusual name.

A: Yeah. My Mom found it on a license plate actually. The name Shay was on a license plate in front of her. She was 18 and thought “Shay is cute but that’s a nickname.” So she added Shay-Lene, Shay-Line, Shay-Lin. And she liked Shailene. She didn’t have me until she was 26 but she remembered it for all those years. When I was born my Dad liked it too.

Q: As you’ve been acting for a long time and she is new to it, did you find yourself showing Amara the ropes a little bit?

A: Yes I did, and it was so much fun. She was 10 when we filmed so I definitely became the big sister and she was the little sister. It got to the point sometimes when I would say, “Scram! I need my space” and she was always coming from the position of, “Play with me! Play with me!” But, yeah, it was really cool. It was great when you could say, “So, this is how a camera works,” which seems obvious to those that have been on a film set many times but to a 10 year old, she literally thought there were only four people behind the camera. When she got to set and there were 200 people on the stage she thought, “What is going on? This is so bizarre!” But she is a really mature young lady. She’s definitely an old soul in the sense that she didn’t get overwhelmed. We got lucky. She actually can act.

“The Descendants” opens February 15 in theatres from 20th Century Fox to be distributed by Warner Bros.