Valentine’s not yet over when non-stop romantic action and comedy 'This Means War' opens in cinemas soon.

Chris Pine and Tom Hardy portray the world’s deadliest CIA operatives who are also inseparable partners and best friends… until they fall for the same woman (Reese Witherspoon) in This Means War. Having once helped bring down entire enemy nations, they are now employing their incomparable skills and an endless array of high-tech gadgetry against their greatest nemesis ever – each other. 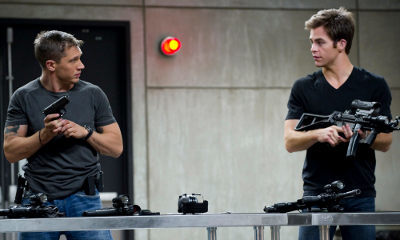 James, better known as Tuck (Hardy), is ruggedly good-looking and dangerous, but not nearly as skilled at romantic matters compared to his best friend and partner Franklin Delano Roosevelt Foster, better known as FDR (Pine). Together, their unrivaled flair, formidable covert abilities, and good looks, make them the best of the best among CIA agents. But FDR and Tuck’s longstanding personal and professional bond is put to the test when they unwittingly begin dating the same woman.

That woman is Lauren Scott (Witherspoon), a senior product evaluator for a leading consumer advocate publication. She has a far-reaching knowledge of products ranging from ovens to smartphones, and is a skilled leader at her workplace. What Lauren is not good at is meeting men, until her best pal Trish (Chelsea Handler) takes matters into her own hands and signs Lauren to an on-line dating service – which Tuck had recently, and reluctantly, joined. 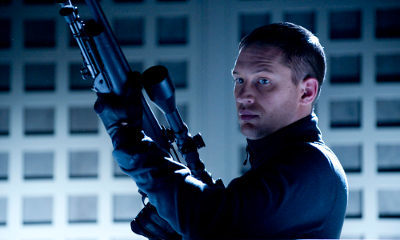 “Tuck, however, comes from a more serious school of espionage,” Pine continues. “Tuck is complicated, interesting, and internal. He’s the spy existentialist while FDR enjoys the bacchanalian universe of being a spy. The infuriatingly talented Tom Hardy plays Tuck. Tom is super charismatic and handsome as all hell and he brings a complicated nature and an English sensibility to his role.”

The filmmakers’ long search to cast the role of Tuck ended when they saw Hardy’s performance in the box office hit Inception. “Tom had everything we wanted,” recalls the movie’s producer-writer Kinberg. “His sense of humor had a much different tone than Chris’. Tom has an aura of danger, which we really wanted for Tuck. He was very physical, conveyed the character’s complexities, and was perfect for the role.”

Though Hardy seemed to become an overnight sensation with his breakthrough work in Inception, he has also turned in much lauded performances in the recent dramas “Warrior,” “Tinker Tailor Soldier Spy,” “Bronson” and “RocknRolla.” For his role in “This Means War,” a big comedy-action film, was a substantial departure from his earlier work. “Tom is an actor who loves challenges,” observes Kinberg. “He had done heavy drama and action, so I think the challenge of playing this movie’s humor and fun is what drew him in.”

Hardy concurs the film presented a very different kind of opportunity than his previous work. “Comedy, in itself, is not an easy thing to do,” he explains. “I thought it was going to be a walk in the park, but it’s one of the hardest things I’ve ever done. I’m very grateful for the experience.” Hardy was also drawn by the opportunity to play opposite Witherspoon. “Working with Reese was like a master class in the comedy genre for me.”

The “spy against spy” storyline – what happens when two best friends who have incredible skill sets turn on each other – is integral to the film’s humor and action. At the same time, director McG wanted these bigger than life situations to be relatable. “We wanted to present that in a way that felt very credible,” says the Charlie’s Angels and Terminator: Salvation helmer. “We weren’t interested in making a spoof. And I liked taking advantage of Tuck’s and FDR’s ‘Alpha’ characteristics. Each man recognizes the skill of the other but at the end of the day, each is betting on himself. And that is a great engine for a movie.”

“It’s every woman’s fantasy to have two unbelievably hot, sexy guys battling over you,” says Witherspoon. “Lauren doesn’t know that Tuck and FDR are secret agents for the CIA. “This Means War” is almost like two different movies. My character’s in a comedy and Chris’ and Tom’s are in a big action film.”

Making FDR and Tuck believable as CIA agents was tasked to Paul Maurice, a military advisor with extensive wartime experience, who serves as the film’s CIA technical advisor. Maurice worked closely with Pine and Hardy to give them a high proficiency in weapons-handling and hand-to-hand combat.

Production designer Martin Laing and his team upped the spy-against-spy action by devising gadgets utilized by FDR and Tuck as they wage war against one another. Laing’s team researched CIA weapons and surveillance techniques and made them even more high tech and fantastic.

Valentine’s not yet over when non-stop romantic action and comedy starts February 22 when “This Means War” opens in cinemas nationwide from 20th Century Fox to be distributed by Warner Bros.