Jonah Hill, From Comedian to Oscar-Nominee with ‘Moneyball’

Best known for his comedic performances, Hill welcomed the chance to sink his teeth into a subtle, dramatic performance in 'Moneyball'. 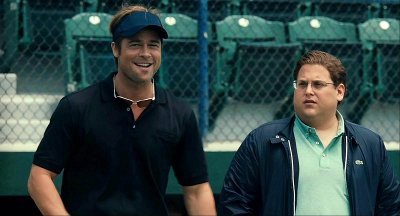 “I saw it on TV and started freaking out,” Hill admitted. “My mom was the first to call and then [producer] Scott Rudin shortly after that. This whole thing… it doesn’t feel real yet.”

Nominated for six Academy Awards including Best Picture and Best Actor, Columbia Pictures’ sports-oriented film “Moneyball” is based on the true story of Billy Beane (Brad Pitt) – once a would-be baseball superstar who, stung by the failure to live up to expectations on the field, turned his fiercely competitive nature to management.

Billy Beane’s radical revamping of his team, the Oakland A’s, was a collaborative effort, one that relied on his recruitment of a team of economic analysts who replaced baseball’s hunches and gut instincts with a fresh skew towards science. To capture the essence of the math brains who changed American sports, the screenwriters created a character: Peter Brand. 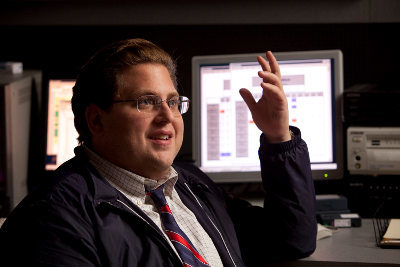 As played by Jonah Hill, Brand is an Ivy League economist turned unlikely baseball analyst – a guy who in any other field might be among the best and brightest, but in baseball has been relegated to outsider status. It is Brand who keys Beane into one of the main insights behind the “moneyball” concept: that the value of a baseball player isn’t something you can see or sense, but something you find lurking in the numbers. When Beane hires Brand away from the Cleveland Indians with the intention to put his stats-based approach front and center for the A’s – no matter the fallout — he sets the two men on a collision course with baseball orthodoxy.

“Peter Brand is an outsider,” says director Bennett Miller. “He’s an Ivy League kid with a degree in economics and a perspective on the game that nobody in baseball could possibly have had. Billy plucks Pete from a cubicle in Cleveland and weaponizes him.”

Best known for his comedic performances, Hill welcomed the chance to sink his teeth into a subtle, dramatic performance. He approached the character as a baseball interloper driven by a true love of the game, and a man who grows on the job. “Peter Brand is the kind of guy who really should be a billionaire on Wall Street, except that he loves baseball,” observes Hill. “Because of his background, he judges players in a different way than the system supports. He’s all about the facts. He realizes it’s not about how a guy throws, how fast he runs or what he looks like. It’s about how often he gets on base.”

Yet what seems perfectly logical to Brand, comes across at first to the rest of the baseball world as a threat to a grand tradition. “It’s a natural reaction,” notes Hill. “Any time you try to change the way things are done, people from the previous generations are going to be upset, especially if you’re saying what they’re doing is unproductive. You can understand why they think ‘who is this kid using a computer to tell me who the players should be?’”

While Beane and Brand couldn’t be more divergent personalities, Hill says one attitude unites them. “For both men, it’s them versus the world,” Hill explains. “These are two guys with their backs against the wall who find the guts to fight for what they believe in.”

Opening soon across the Philippines, “Moneyball” is distributed by Columbia Pictures, local office of Sony Pictures Releasing International. Visit http://www.columbiapictures.com.ph for trailers, exclusive content and free downloads. Like us at www.Facebook.com/ColumbiaPicturesPH and join our fan contests.