The Gods are Again at War in ‘Wrath of the Titans’

Warner Bros. Pictures‘ new 3D epic adventure Wrath of the Titans revisits the Greek mythology first explored in the global box office hit “Clash of the Titans.” The new film is directed by Jonathan Liebesman and sees the return of Sam Worthington (“Avatar”) as Perseus, as well as Ralph Fiennes (the “Harry Potter” films) as Hades and Liam Neeson (“Taken”) as Zeus. 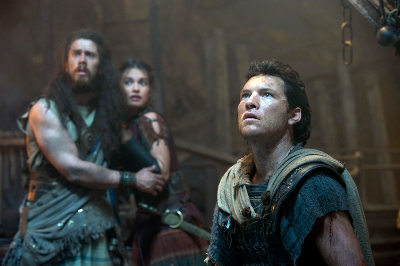 A decade after his heroic defeat of the monstrous Kraken, Perseus — the demigod son of Zeus — is attempting to live a quieter life as a village fisherman and the sole parent to his 10-year old son, Helius.

Meanwhile, a struggle for supremacy rages between the gods and the Titans. Dangerously weakened by humanity’s lack of devotion, the gods are losing control of the imprisoned Titans and their ferocious leader, Kronos, father of the long-ruling brothers Zeus, Hades and Poseidon (Danny Huston). The triumvirate had overthrown their powerful father long ago, leaving him to rot in the gloomy abyss of Tartarus, a dungeon that lies deep within the cavernous underworld.

Perseus cannot ignore his true calling when Hades, along with Zeus’ godly son, Ares (Edgar Ramírez), switch loyalties and make a deal with Kronos to capture Zeus. The Titans’ strength grows stronger as Zeus’ remaining godly powers are siphoned, and hell is unleashed on earth.

Telling this story on a grand scale, with an acclaimed ensemble cast—in immersive 3D no less—was an opportunity the South African filmmaker Liebesman could not turn down. “To be honest, this is my favorite genre,” says Liebesman. “It’s also the chance to do an old school Hollywood movie where you have amazing actors, big stars, and a big canvas. It’s a huge opportunity for any director.” 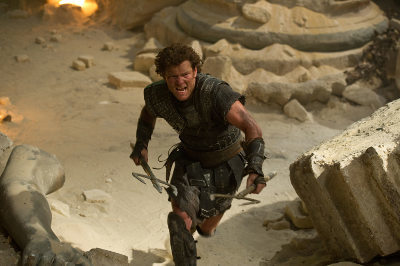 “Clash of the Titans” was released in 2010 and its blend of Greek mythology and sweeping action brought to life with the very latest technology available to contemporary filmmakers proved hugely popular with audiences worldwide. The latest film—written by Dan Mazeau & David Leslie Johnson, from a story Greg Berlanti & David Leslie Johnson & Dan Mazeau, based on characters created by Beverley Cross—presents an human story against the immense backdrop of the mythological Gods and Titans.

“The drama in our story is really important,” says Liebesman. “And we have all worked really hard on the script. With a movie like this you want people to be entertained and thrilled and, at the same time, you have such tremendous actors up there on the screen so there’s a great opportunity to make the audience really feel for these characters.”

Given the mythology already invested in the films, Liebesman is understandably keen to stamp his own mark on “Wrath of the Titans,” approaching the film with a clear, strong vision for a new beginning. “I wanted to treat the second film as its own thing,” he explains. “Of course, there are relationships that are continued from the first film—like Perseus and Zeus, for example—that have to be respected. But our approach was to look at this as its own entity within that world. I don’t want to betray anything that has been set up but, at the same time, I don’t want to be chained to whatever was done before.”

Liebesman arrived on the project fresh off the alien invasion action thriller “Battle Los Angeles.” As with that film, given the scope and scale of “Wrath of the Titans,” the director hopes to ground the action in real dirt and sand. “For me, what was interesting was to make a film in a gritty, grounded style juxtaposed with the kind of fantasy elements that you would see in a story like this,” he explains. “I enjoy making movies that I would go and see on a Friday night. This is a big movie and I want people to have a good time when they see it. That’s the satisfaction for me.”

Opening across the Philippines in March, “Wrath of the Titans” is distributed by Warner Bros. Pictures, a Warner Bros. Entertainment Company.