Oscar® and three-time Golden Globe® winning actress returns for the fantasy-adventure sequel that picks up several years after the first film and continues to explore the complex relationship between her and Princess Aurora (Elle Fanning).

In 2014, audiences first saw Angelina Jolie take on the role of Disney’s most notorious villain, Maleficent. The film offered another perspective to the traditional fairytale that placed the spotlight on the events that drove her to curse a newborn baby princess to sleep forever. The film puts a fresh spin on the traditional fairy tale with a villain as the story’s protagonist. 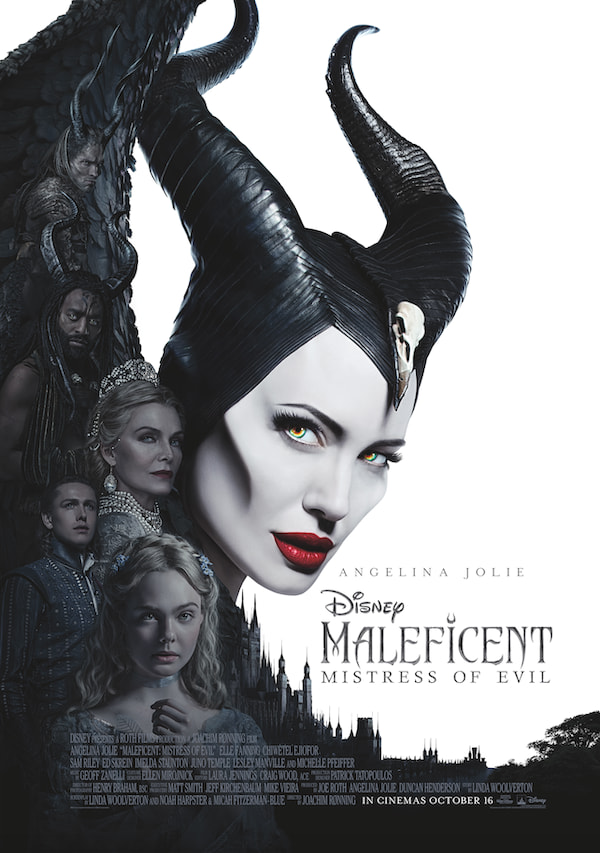 This year, Jolie wears her cloak and puts on her horns once again as she reprises her iconic character in Disney’s Maleficent: Mistress of Evil. Oscar® and three-time Golden Globe® winning actress returns for the fantasy-adventure sequel that picks up several years after the first film and continues to explore the complex relationship between her and Princess Aurora (Elle Fanning).

Jolie shares, “These Disney films are always big and beautiful which is one of the reasons why it's a privilege to be a part of them. I always wanted to come back because I loved doing the first one. I loved what it said about people and how they’re not always what you think they are and not always what you assume.”

Taking on the reins to direct the much-anticipated follow-up to Maleficent, Disney enlists the expertise of Norwegian film director Joachim Rønning (Pirates of the Carribean: Dead Men Tell No Tales, Kon-Tiki). He looks back at how Disney created something truly unique and humanized a villainous character to make it relatable to fans of all ages.

“With any story, I look at the emotional core, the heart of the story,” Rønning says. “One of the reasons the first Maleficent was so successful is because it had a very strong and relatable emotional journey for the audience, and in our story Aurora is basically moving out, which is something all parents dread, and that’s exactly how Maleficent feels.”

Mistress of Evil sees Maleficent realizing her true powers and fighting for the love of her own kind as she and Aurora are pulled in different directions by impending nuptials, unexpected allies, and dark new forces at play.

Golden Globe® winning, Emmy® nominee and three-time Academy Award® nominee Michelle Pfeiffer joins the cast as Queen Ingrith. She appears in the big screen alongside Jolie and Fanning as the wicked and cunning future mother-in-law who causes a rift between Maleficent and Aurora.

“It’s always fun playing a villain,” Pfeiffer shares. “Queen Ingrith is damaged and has been betrayed by a lot of men in her life, but she’s got her eye on the goal and nothing will get in the way of that.”

The upcoming blockbuster film also stars Chiwetel Ejiofor as Conall, one of the leaders of the dark fey who befriends Maleficent; Harris Dickinson as Prince Phillip, Aurora’s betrothed and crown prince of Ulstead; Sam Riley as Diaval who is the horned fairy’s trusted and constant companion; and Ed Skrein as Borra, a vengeful winged creature who seeks to start war with humans.

Disney’s Maleficent: Mistress of Evil lands on Philippine cinemas on October 16, Wednesday. Tickets to the film are now available for sale. Join the conversations online at #MaleficentPH.

'Maleficent: Mistress of Evil': Throwing Everything and the Kitchen Sink

New and Returning Faces of Maleficent 2 Featured In Posters

New character posters for the Maleficent sequel has been dropped, featuring new and returning characters!

Angelina Jolie and Michelle Pfeiffer wage war against each other in the upcoming Maleficent sequel.

Angelina Jolie Brings Back the Horns in 'Maleficent: Mistress of Evil'

Five years since the first film premiered in cinemas, Angelina Jolie is coming back to the big screen with her horns in Maleficent: Mistress of Evil!
0