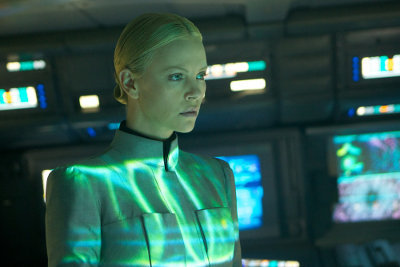 Shot entirely in 3D, legendary filmmaker Ridley Scott creates a new mythology in the film. He takes us on a momentous journey, posing intriguing questions about the origins of life. The story follows an intrepid team to the darkest corners of the universe. They are embroiled in a battle of epic proportions. At stake: the future of the human race.

Born in South Africa, Charlize Theron is one of the most diverse and engaging A-list actresses working today. Theron was already a well-defined movie star when, in 2003, she won an Oscar for her extraordinary performance as Daytona Beach prostitute-turned-serial killer Aileen Wuornos in Patty Jenkins’s extraordinary film “Monster.”

Prior to “Monster,” Theron had already attracted stellar notices for her performances in movies as diverse as “The Devil’s Advocate,” “The Cider House Rules” and “The Legend Of Bagger Vance.”
“Prometheus” is not Theron’s first experience of science fiction. In 2005 she played the title role in the film “Aeon Flux,” based on the animated television series created by Peter Chung.

Charlize Theron reveals her attraction to “Prometheus” and her passion for the films of director Ridley Scott in the following q&a:

Q: How did you hear about the project?

A: I was in Malaysia and my manager called and said, “I’m sending you this script.” I’ve known Ridley for a couple of years, socially, so I knew he was working on this project. It was so secretive…I was in the middle of a rainstorm on a mountain, trying to read this script under a tree because it was the only place I could get reception. 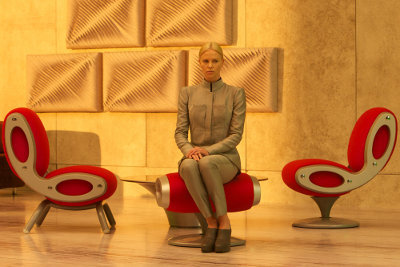 Q: Damon Lindelof, the screenwriter, says you collaborated with him on fleshing out the character in the screenplay. How was that process?

A: I thought there was tremendous potential to explore themes that the script was already exploring through the eyes of a character who was so different from everybody else who’s on this mission. You have these scientists going out there – one is a believer, one really isn’t – and you play on all these themes, but to really experience all of that stuff from the point of view of somebody who comes from a much colder, more economic, ‘business suit’ sense of it was interesting. It’s really flattering and I was very excited to be partners with Damon and Ridley and to forge ahead.

Q: Who is Meredith Vickers?

A: She’s very different from anyone I’ve ever played. She’s a suit, essentially. She’s the machine that runs the machine that takes this mission into space and at first she comes across like a suit, very cold and frigid. She’s not a scientist; she’s not a believer. She runs a tight ship, but you can tell that she’s somehow going to be a problem. She’s somewhat of an enigma. The real excitement for me in playing this character is that in the third act you really strip her from her skin and you see what her bones are about and what she’s really doing there.

Q: Are you always looking for strong female roles?

A: I don’t ever set out to play a character with strength. I try to find the circumstances and try to be as honest as I can in those circumstances. There’s nothing more false than stepping in the wardrobe of a character who doesn’t authentically own those characteristics. Once we all understood the world, where we wanted to go with her and what we wanted to explore with her, that seeped in and all of a sudden I put that suit on and thought, “Yeah, I want to order somebody around!” You just kind-of find it.

Unravel the enigma that is Theron when “Prometheus” (in 3D) opens in cinemas nationwide from 20th Century Fox to be distributed by Warner Bros.