One of the fastest-rising stars in the business, the 34 year-old German-born, Irish-raised Fassbender has wowed multiplex and arthouse audiences alike over the past couple of years with searing, indelible turns in the likes of “Hunger,” “X-Men: First Class,” “Inglourious Basterds” and “Shame,” which saw him reunite with Steve McQueen. A passionate, instinctive actor, who better than Fassbender to breathe humanity into David’s cold hard exterior in the highly anticipated sci-fi adventure Prometheus 3D? 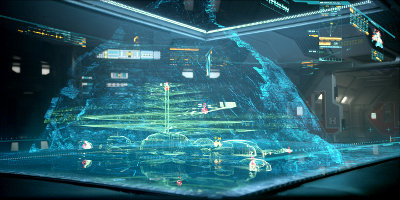 From Ian Holm’s duplicitous Ash to Lance Henriksen’s dependable Bishop, androids have played a huge part in the Alien franchise. So it’s not a huge surprise to find that Prometheus also has an artificial humanoid on board its eponymous spaceship, in the blond-haired guise of Michael Fassbender’s David.

The character of David represents Prometheus’ “company man.” An androgynous android with personality defects, David is the eyes and ears of the Weyland Corporation that funds the Prometheus mission.

Fassbender in the following q&a shares his take on humanity, working with Ridley Scott and Prometheus’ weighty themes.

A: He’s the robot. Or humanoid. Or android. Or whatever you want to call it. He’s like a butler. The first thing I wanted to do with him was to make him ambiguous. Should he be having emotions? I wanted to keep it ambiguous and have a lot of fun with it and enjoy it. I don’t know if that’s an easy description, but there’s so much comedy in him, actually, that I wanted to try to explore that as much as I could.

Q: Comedy? Even in an intense film like this?

A: Think Buster Keaton. Yesterday I kept banging my head off the screen on the ship and tripped over something else, and it was like a Buster Keaton moment! I also like the idea of treating him as a child, in certain respects. He’s been on this ship for two and a half years before everybody comes out of cryo-stasis.

Q: What does he do in that time?

A: He studies things, he watches films. There’s various things he soaks up. He’s been studying what Shaw (Noomi Rapace) and Holloway (Logan Marshall-Green) have come up with through their findings and research and the language that he thinks they [the Engineers] would speak, he’s been practicing that. 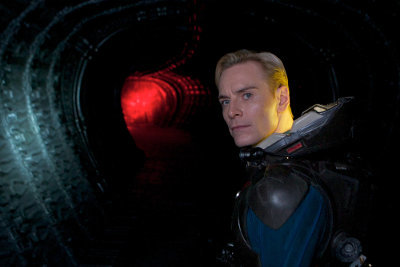 A: I think he knows his limits. He’ll know his limits when he gets there. Limit doesn’t exist for him. He will go until the point when he can’t go any further, physically. He doesn’t think about people’s suffering that much. He has an empathy and he’s developed that. But he’s more curious, like a child burning ants with a magnifying glass. There’s a cruelty there for sure, but it’s almost before a child comprehends cruelty. He does things for an end result.

But I don’t think he has any real moral compass. There’s something about him. He’s quite chuffed with himself. He’s very full of himself and he thinks he has most of the answers. In human company, he feels far superior.

Q: It is a film about creators and their relationship with their creations.

A: It’s about how the human beings are desperate in various ways to face this knowledge and get the answers to their questions, and not getting the answers to their questions. He’s never really been accepted and I think he does want to be accepted, very much so. But they always have that differential – we made you because we could. What’s interesting about him is that I do think this thing has been designed to behave like a human, but on a superior level, but it’s interesting that human personality traits start to bleed into the robot.

Q: Can you talk about the big ideas that are being tackled here?

A: What is the purpose of us being here? That’s the underlying question of the human race. That is why people are searching for heaven and for God, or Gods, as it was before. Why? There must be some purpose for us to be here, right? And that’s being explored in the film.

Q: Were you aware of the Prometheus myth?

A: I was. I do enjoy the greek classics and ancient history. The liver getting pecked away every night is a nasty affair, really.

Q: How does that tie in to the film?

A: Perhaps the fact that we keep going round in a circle, maybe that’s it. It’s a cyclical thing. There’s no resolution to the end of it, perhaps. It’s an ongoing quest.

Watch more of David in “Prometheus (3D)” when it opens June 7 in theaters nationwide from 20th Century Fox to be distributed by Warner Bros.