Noomi Rapace, in a Tug Between Science and Beliefs in ‘Prometheus’

Noomi return to sci-fi as an archaeologist in the suspenseful futuristic mythology 'Prometheus' 3D.

Noomi Rapace won rave reviews and came to worldwide attention for her performance as Lisbeth Salander in the original Swedish language Millennium films – “The Girl With The Dragon Tattoo,” “The Girl Who Played With Fire” and “The Girl Who Kicked The Hornet’s Nest.” After working for a decade in her native Sweden she is now in huge demand for Hollywood movies including Ridley Scott’s return to sci-fi in the suspenseful futuristic mythology Prometheus in 3D. 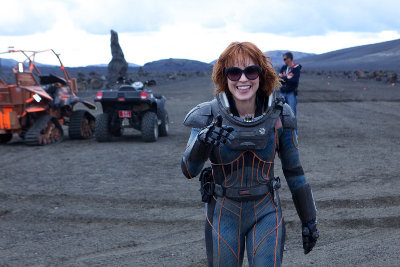 The role was playing Elizabeth Shaw, a key character in Sir Ridley Scott’s eagerly awaited Prometheus. Shaw is an archaeologist who joins the crew of a spaceship – The Prometheus – bound for a distant planet that may provide the answer to the biggest question of all, the origins of mankind. 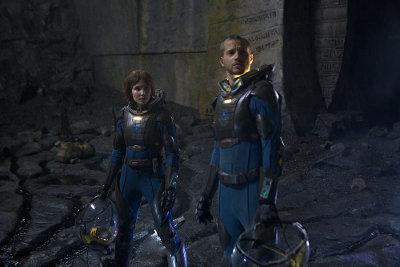 The chance to work with Scott, a filmmaker she has admired since she was a child, was too good to miss and the experience has been everything, and more, that she hoped for.

Rapace, 32, was born in Hudiksvall, Sweden and studied drama in Stockholm. She made her TV debut in the drama Tre Kronor in 1998 and has worked extensively in Swedish theatre. Her films include “Daisy Diamond,” the Millennium trilogy, “Beyond,” “Babycall” (a performance that earned her the Best Actress Award at the Rome Film Festival in 2011) and “Sherlock Holmes: A Game of Shadows.”

Q: There’s been a lot of speculation about the film’s relationship to Alien. So is your character, Elizabeth, like a Ripley character in a way? Is she cut from the same cloth?

A: I think Shaw is more feminine in a way. She’s a scientist. She’s an archaeologist. I think that Ripley was, in a way, harder from the start and from the beginning and she was a loner. Shaw starts this journey to be with Holloway and she loves him. They’re a team and they’re doing this together. I think she goes from being quite innocent and full of hope and belief, to getting into something that is a bit darker, but she’s still a believer. She’s has an angel watching over her all the time in a way that she believes in. But I think she’s related to Ripley in a way. I think that all Ridley’s women are quite tough or they can stand up for themselves and they’re quite good at fighting back.

Q: Your character drives the movie in a way, it’s your quest that they’re setting out on, isn’t it?

A: Yes. In a way, I think she is the heart in the movie and as well, the one you read things through. So she’s probably the engine in a way and also the one who starts everything. She approaches Mr. Wayland. She convinces him to actually put all his money in this mission and it is probably his last journey because he’s quite old.

Q: Do you have some background for your character?

A: Shaw lost her father when she was quite young. He was a Christian missionary. I think if something dramatic happens in an early age, it’s like you have two options in a way. But she chooses the other way because she was a loved child and her father gave her the gift of faith and belief, and she’s held onto that. She believes there’s a purpose to everything. At the end of the day it’s about what she chooses to believe, who she is, and what she makes out of things instead of seeing herself as a victim.

Q: Isn’t the mission a direct challenge to her Christian beliefs?

A: It is, but also I think that the engineers she meets are, from my point of view, almost like angels. Who created them? So she’s tracking down where it all started.

Q: It’s an ensemble cast. How does that interaction with the rest of the cast work for you and how does it work for the character you play?

A: Elizabeth is very much a team player and she’s very professional. Ridley found a fantastic mix of people for this project and it was pure joy to work with them because they are amazing actors. I certainly don’t see myself as the lead, you know. It wasn’t like that. It was very much what we all created together. I feel very lucky because I’m surrounded by people who are just amazing, incredible actors. And Ridley was the perfect leader because he gave everybody something and then we all brought it together.

Q: Did you train long and hard for this part?

A: After I finished Sherlock, I started training for Prometheus. I did a lot of running because I didn’t want to build up too much, I didn’t want to be big but I wanted to be able to cope with the physical demands of the shoot. In Prometheus, the crew had to be ready for whatever is coming because they don’t know what they are going to meet. So yes, I did a lot of running, like five days a week.

Q: Prometheus is a big studio film. Does that represent a different challenge from making smaller independent films?

A: Not really. It’s all about connecting with the script and the character and I don’t care if it’s a big studio movie or if it’s a small independent movie. At the end of the day, it’s the same thing. It’s the script and the director and the actors and you have to find a way of making it yours.

“Prometheus” 3D lands very soon in theatres on June 7 from 20th Century Fox to be distributed by Warner Bros.