Tom Cruise Will Rock Your World in ‘Rock of Ages’

With opera singers as ancestors, Tom Cruise reportedly is genetically predisposed to sing, but no one's ever asked him to before 'Rock of Ages'. 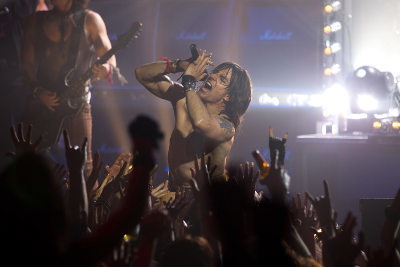 In the film, Stacee Jaxx is the rock god that every guy wants to be and that every woman wants to bed. The lead singer of Arsenal, Stacee is at a turning point in his career, and in his life. He’s about to go solo, and his final show with the band is at The Bourbon Room. It’s a homecoming of sorts, as he played his first gig there back in the day. But fame and fortune may have come too easily to the front man who, after years of indulgence, has become boozed up and blasé to the point of bored, and less than reliable when it comes to showing up for his own shows.

The casting of Stacee Jaxx turned out to be somewhat serendipitous. “I was thinking to myself, ‘Wouldn’t it be cool if we got one of the biggest movie stars in the world to play one of the biggest rock stars in the world?’” Shankman reflects. “And, as luck would have it, I ran into Tom Cruise, told him I was directing this movie, that it was a musical, and that I was going to offer him this part. He said, ‘Are you serious?’ I said I was. Then I described Stacee to him and he laughed really hard. The next thing I knew, he was in, and I was making a musical with Tom Cruise.” 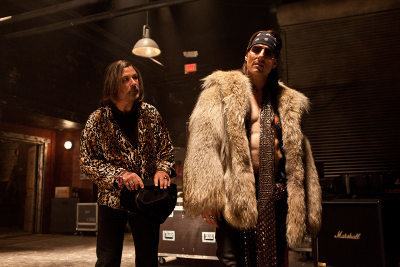 To play the role, Cruise underwent a complete transformation, and Shankman admired his diligence. “From the moment he signed on, Tom started training his voice with an incredible vocal coach, Ron Anderson. I remember the first time we heard him sing. He’s got this outrageous, four-octave range—turns out he has opera singers in his ancestry, so he’s probably genetically predisposed to sing, but no one’s ever asked him to before. I’m just the lucky recipient of this revelation, I suppose,” he smiles.

“The joy at having discovered that he can sing was a huge relief,” Shankman admits, recalling that both he and the actor had long wanted to collaborate on a project when “Rock of Ages” came along. “There was a moment when we were looking at each other and Tom said, ‘Well, what if I can’t sell this? Because I won’t do it if it’s not me singing.’ With everything he does, from stunts to performing in front of an audience, it has to be him doing it. He believes his audience has come to expect that, and why bother doing it otherwise? But this is what he loves. He loves making movies and he wants to be really good, so he works harder than anybody at it.”

“Tom is a rock god because he brings all of the star power that comes along with being Tom Cruise, and he’s found a character that audiences have never seen before,” Shankman concludes. He describes Stacee Jaxx as being “one of those man-children that no one ever says ‘no’ to. He’s not a bull in a China shop. He’s just a guy who doesn’t even know what boundaries are. And his go-to has just become sex because that’s the only thing he really knows anymore, but it’s not because he wants anything.”

Opening across the Philippines in June 14, 2012, “Rock of Ages” will be distributed worldwide by Warner Bros. Pictures, a Warner Bros. Entertainment Company.