Best known as The Office's Jim Halpert, John now plays the role of a television reporter in drama 'Big Miracle'.

John Krasinski, best known to American audiences as Jim Halpert on the hit television show The Office. In Universal’ Pictures Big Miracle he plays Adam Carlson a television reporter who lived in the city at that time, but as an amalgam of small-town news people who served to tell the human elements of the story. 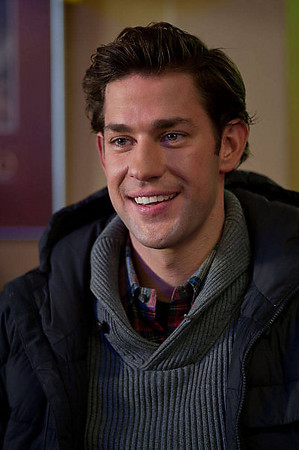 Even though signing on would mean multiple trips between the set of his television series and Anchorage, Krasinski believed it was worth it to work again with director Ken Kwapis. The filmmaker had directed him in License to Wed, as well as many pivotal episodes of The Office. “Ken is a phenomenal person,” commends Krasinski. “He did the pilot of our show and many of the important episodes, including the first time I said ‘I love you’ to Pam. He’s been there emotionally in a lot of stages of my life as an actor, as well as a person growing up in front of the camera. He has that rare gift to be not only in tune with you but also with the whole movie.”

The producers were pleased to bring him onto the production as a character who would discover the story and be at the center of the story’s romantic triangle.
When Barrymore heard that Krasinski was a candidate to play Adam, she advocated bringing him onto Big Miracle. “I remember calling Ken from the San Francisco airport,” she says. “I was screaming down the hallway that I’d do anything to do this movie with him. He was perfect for the role, as he is wholesome, funny and a good guy, just like Adam. Even though the film is rooted in the environmental and political aspects of the whale rescue, there is also a love triangle that had to work among me.”

This is a big change for you from The Office.

Definitely. For a while there, Ken Kwapis (director) and I were doing both at the same time. It was pretty wild. For the first month or so that we were shooting, I was going back and forth from The Office to this. It’s awesome and it’s so fantastic to have the opportunity to do a movie like this that has such a beautifully epic story. It is moving. I was hooked on the idea of the true story.
When you’re reading the script, there are moments where you say to yourself, “Oh, come on! This is so over the top and not real!” Then you find out it’s exactly what happened. Especially the story of the Colonel getting married to Kelly. I’m just psyched to be up here. This is my first time being on a big, crazy location.

How are you dealing with the cold?

Pretty well. That’s my Boston blood in me coming back. It got pretty diluted in LA. My brothers make fun of me when I go home to Boston and when it’s around 60 degrees I’m like, “Ooh… It’s getting cold.” They think I’m completely ridiculous but it’s finally coming back and I’m starting to get the feeling in my hands again.

Can you talk about your character?

I play Adam Carlson, a local news reporter. He’s been sent up here to Barrow, Alaska by the Anchorage news station that he works for to cover several different stories. He would love to get back to a major news station elsewhere. Then he happens upon these whales that are trapped in the ice. Adam is the first person to cover the story and it’s Adam’s story that gets picked up by the national news. So, he’s the reason everybody’s here. A lot of my scenes happen once the national news services come to Alaska. Adam is pretty overwhelmed and trying to get his foot in the door with anyone of these people that will listen to him. For me, it was a whole thing about the media frenzy that went on.

Did you get to meet the real Adam Carlson?

Adam is actually a hybrid of a couple of different people. I didn’t get a chance to meet one person because there wasn’t really that one person. Drew Barrymore (plays Rachel) met the person whose character she portrayed, Cindy, the real Rachel. Cindy is a phenomenal lady and she gave Drew all this great material to work with.

How did you prepare for the role?

Because my character is a news reporter, I basically looked at all the news footage that happened at the time. Having read the book, you see that it did become a huge media frenzy. It’s both incredible and a little ridiculous that so much media power can be focused on one place, at one time. It’s also incredibly inspiring. It gives you the idea that we could potentially be doing more with where we’re focusing the media these days. That’s kind of where I was going with my character.

Can you talk about working with Drew Barrymore?

Drew is phenomenal. She has so much experience and is still so young. She’s had so many experiences and learned so much about the business in such a short amount of time. Drew is such a pro. She knows exactly what she’s doing. She is prepared and, on top of all that, is able to have fun. Off set, we get along great. She’s fantastic and as the lead of the film, you couldn’t’ have anyone better. Her spirit as an actor and her deep belief in all her causes are huge to have on set. And the love story with Drew is really fun. Come on. It’s Drew Barrymore.

Can you talk about your favorite scenes?

So far, one of my favorite scenes is the big emotional climax of the movie, when the whales start to move. When you read the script, you hope there’s an emotional impact on screen. Those scenes are fun to shoot because you get to see the weight of the movie actually coming together. When you’re doing a lot of scenes, and they’re kind of scattered, it’s hard to keep a barometer of what’s going on in the movie. When we did that scene, you realize what kind of movie it is and it’s a really good check in point.

How is it working with director Ken Kwapis?

I have worked with Ken on The Office. He put me in LICENSE TO WED and in this film. I think he still to this day is one of the best directors I’ve ever worked with. He’s incredible with actors and with grasping on to emotional strengths.

What do you make of the anima-tronic whales?

I was genuinely frightened when I first came to the set. When you first look at them, you get the sense that you’re going to fall into a tank, like if you go to SeaWorld or the zoo. They’re unbelievably realistic. The guys running them are unreal. They are so incredibly talented, designing these things and then the way they move them. It’s like a video gamers dream come true. They have these huge joysticks. I’m jealous.