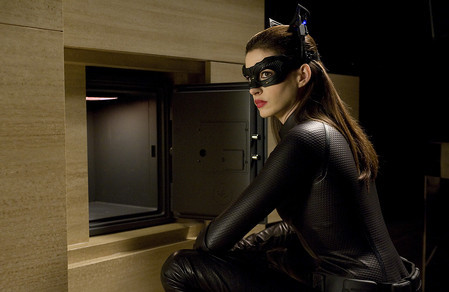 Nolan says, “We felt very strongly that we should have Catwoman in this film, but we always look for an organic way of grounding the characters in our world. Selina is a cat burglar, a grifter, a classic movie femme fatale, really. That was my way in, and we drew the iconic figure of Catwoman from that.” 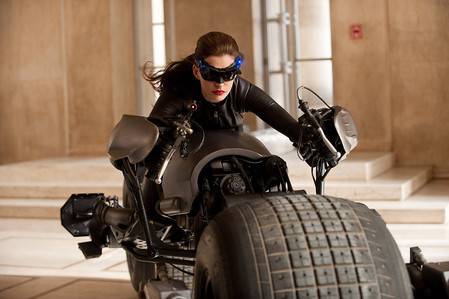 The only member of the main cast who counts this film as her first collaboration with Nolan, Hathaway admits, “It’s hard to reveal anything about Selina Kyle because she is intensely private and very mysterious. She has her own code of ethics, which sometimes involves doing things that other people might consider questionable.” 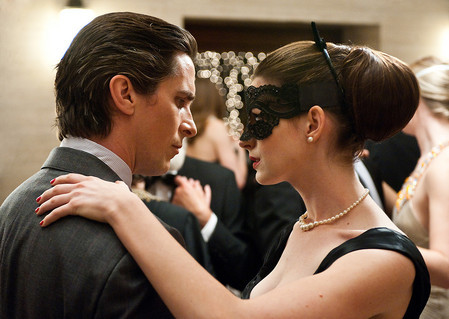 Screenwriter Jonathan Nolan says, “Something about her morally ambiguous philosophy finally gives Batman someone he can relate to. In a weird way, she’s the yin to his yang. The dynamic between them is so fresh—the playful way she kind of pokes fun at him—it sparks a connection between them and takes some of the somberness away from his character.”

In the film, Gotham’s most influential citizens have gathered at Wayne Manor for a benefit honoring Harvey Dent Day. It is the perfect hunting ground for the audacious and undeniably attractive cat burglar, Selina Kyle. Her encounter with Bruce Wayne has an unexpected effect on him.

Christian Bale, who reprises his Batman/Bruce Wayne character, reveals, “What really impacts Bruce is that, after years of isolation, he’s meeting this woman he finds fascinating and funny. He suddenly recognizes he’s been seeking something, even unconsciously…that he’s lost all the color in his life and needs some human contact.”

Hathaway asserts, “I think Bruce owes Selina a big thank you because he was leading a pretty lonely life until she came in and got his blood pumping and reminded him that there are fun people out there in the world. One of the things that fans have always enjoyed about Bruce and Selina is the playful side of their relationship. They may operate very differently, but they actually have a lot in common: they like to keep certain things hidden; they’re usually several steps ahead of everyone else in the room; and they prefer to dress in black,” she smiles. “I had so much fun working with Christian. He’s quick to laugh and have a good time, but he’s also so solid. He’s the kind of actor that raises your game.”

Acting alongside Bale was not the only reason Hathaway was excited to portray what she calls “one of the most famous female comic book characters ever.” She recounts, “I did look back at some archival comics and read a lot about Bob Kane’s inspirations for Catwoman, but the most important thing was to be Catwoman in this film and fit into Christopher Nolan’s Gotham City. I’m such a huge fan of Chris’s. With Batman, he has been able to pose some really interesting philosophical questions, while shooting these spectacular action sequences and also finding the humor. It was a thrill to work with someone whose mind is so brilliant and whose talent is so very evident.”

Nolan offers, “We needed to find the balance between the classic image of the character and a believable person you care about. Casting Anne Hathaway in the role was the key to that. She was able to combine those facets seamlessly so they aren’t in conflict, but one is amplifying the other.”

“I think Selina does what is necessary to survive,” shares Hathaway, “and that includes crossing a few lines that others might find unforgivable. Even if she wants to change, it’s hard to escape your past…and she does have a past. That makes her vulnerable, especially these days when anyone with a computer or smartphone can look up almost anything about you. Everybody has moments in life when they think, ‘If I knew then what I know now…’ Selina might like the opportunity not to have to live by the choices she was forced to make up to this point.”

Opening across the Philippines on Thursday, July 19 in IMAX, 2D and regular theaters, “The Dark Knight Rises” is distributed worldwide by Warner Bros. Pictures, a Warner Bros. Entertainment Company.