The threat to Batman/Bruce Wayne comes in the form of a merciless, masked villain named Bane, who makes his presence known to the citizens of Gotham with an explosive display of power.

In Warner Bros.’ new action-thriller “The Dark Knight Rises” – the epic conclusion to filmmaker Christopher Nolan’s Dark Knight trilogy – the threat to Batman/Bruce Wayne comes in the form of a merciless, masked villain named Bane, who makes his presence known to the citizens of Gotham with an explosive display of power. 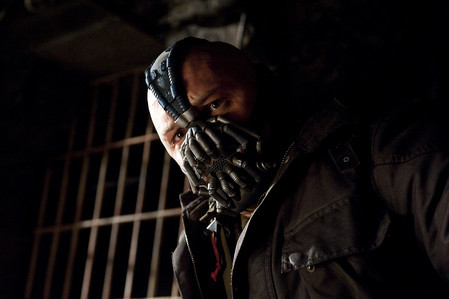 While the Scarecrow was a madman and the Joker an anarchist, “Bane is a terrorist in both his mentality and his actions,” says actor Tom Hardy, who plays Batman’s new arch-nemesis. “He is physically intimidating and he’s also very intelligent, which makes him even more dangerous.” 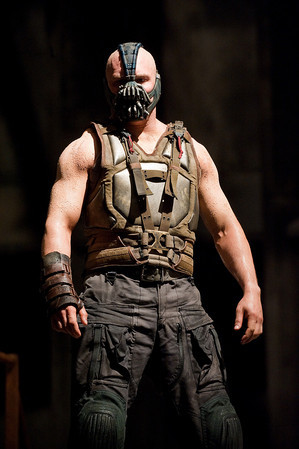 Nolan relates, “In deciding on who the next villain would be, it was imperative that it was someone completely different from the Joker—that he be a brute force. The physical component of what Bruce Wayne does as Batman is of extraordinary importance, and we had not truly challenged that in the first two films. I really wanted to see Batman meet his match physically, as well as intellectually. Bane is raw strength with a fanatical devotion to duty, and that combination makes him unstoppable.” 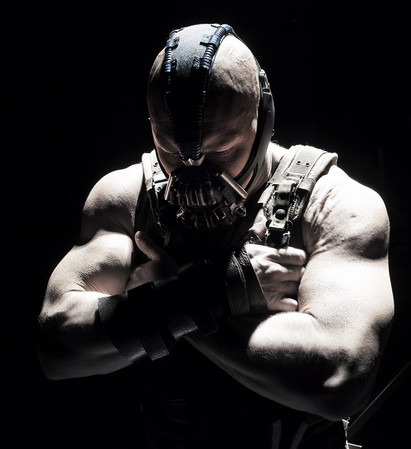 “This is the first time it appears highly unlikely that Batman will come out on top in a physical altercation,” allows Christian Bale who plays the superhero. “He has been dormant for years, so he’s in a weakened condition to begin with, and Bane is not only incredibly strong but ruthless in terms of his sheer militancy and the ideology that drives him.” 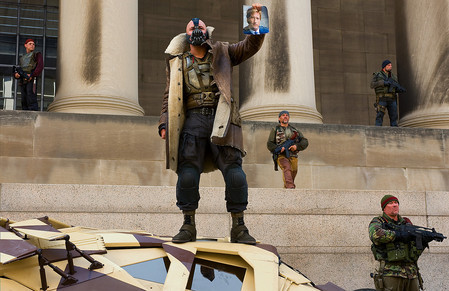 Bane, however, has no such compunctions. Everything he does is a means to an end. Hardy attests, “Bane has come to do a job and has no feelings of remorse or shame about the death and destruction he’s causing. There is nothing ambiguous about Bane. He is clearly a villain…just a horrible piece of work.”

Bane is infamous among Batman comic fans for the terrible harm he inflicts on the Caped Crusader. Having recently worked with Hardy on “Inception,” Nolan knew he could project an extreme physical and psychological threat despite having to act from behind a mask. “When you’re creating a monstrous presence like Bane in a movie, you could concentrate just on the physical or you could focus on the more psychological aspects. With Tom, I knew I would get the whole package. He is such an incredible actor; he was able to depict this beast of a man who has exceptional fighting skills, but also able to convey the soul of someone who is damaged inside as well as out. Tom is the kind of actor who relished the challenge of having to generate an entire performance with most of his face covered up. What he is able to do with just his eyes is truly amazing.”

Hardy states that the mask was not a deterrent when given an opportunity to rejoin the director, especially on a Dark Knight film. “Chris called me up and said there was a role I might be good for, but he wasn’t sure I’d be interested because I’d have to wear a mask for several months. He wouldn’t tell me anything else about the character, except that he was a very bad guy. I said, ‘Let me get this straight: you want me to come and work with you, travel around the world, have a stunt team and all the weapons I could possibly want to play with, and all I have to do is wear a mask?’ He answered, ‘Yeah, pretty much…’ And I said, ‘I’m in!’”

Unlike Batman, Bane does not wear a mask to conceal his identity, but to anesthetize himself against excruciating pain, resulting from injuries he suffered long ago. Countering Nolan’s concerns, Hardy says, “I didn’t feel limited by the mask. What’s cool about it is, as soon as you put it on, you become the character.”

The actor adds that his portrayal of Bane entailed creating a contradiction between the voice and the body. “He is florid in his speech, but has the physicality of a gorilla. So while he is quite articulate, we also wanted to establish a very imposing presence.”

Opening across the Philippines on Thursday, July 19 in IMAX, 2D and regular theaters, “The Dark Knight Rises” is distributed worldwide by Warner Bros. Pictures, a Warner Bros. Entertainment Company.