Ben Stiller and Vince Vaughn Ward Off Aliens In ‘The Watch’

The two actors band together in the film to uncover the mysterious events happening in their neighborhood.

Ben Stiller and Vince Vaughn reunite in “The Watch” along with Jonah Hill and British comedian Richard Ayoade who band together in the film to uncover the mysterious events happening in their neighborhood. 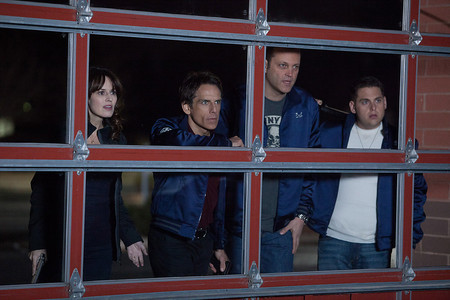 Ben Stiller’s Evan is a senior manager at the superstore Costco, having made a not-so-lightning-fast ascent to that position from assistant manager. Evan is a dedicated employee, but his heart is with the Glenview Neighborhood Watch, of which he is the founder and CEO. “Evan is very community-oriented,” says Stiller, “because he has so few friends, and these clubs give him the opportunity to meet new people.” 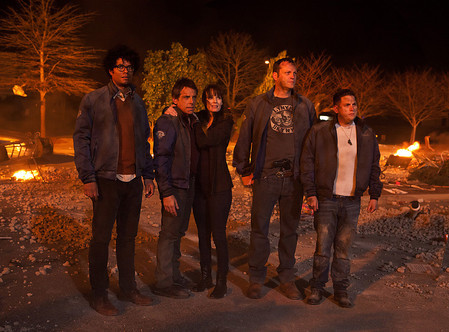 Evan’s straight-laced, buttoned-down personality is a perfect fit for organizing clubs, but it’s not paying off socially. Stiller says he found it challenging to figure out the mindset of a man whose life is defined by a relentless pursuit of order. “I’m not very orderly,” explains the actor, who is currently starring in and directing “The Secret Life of Walter Mitty.” “It wasn’t easy getting inside the mind of a meticulous, stoic and organized guy.”

Regarding the role’s more physical requirements, Stiller was comfortable with the fight scenes, where The Watch takes on the would-be conquerors from a distant world, but less so with a scene that required him to drive a forklift during a climactic battle. “There was lots of action captured on camera, but driving the forklift made for some of the most frightening times on the set – for the crew,” says the actor.

Evan’s polar opposite is Vince Vaughn’s Bob, who is the id to Evan’s superego, the yang to his yin, and, says Schaffer, “a fun loving family man – to the max.” For Bob, The Watch is his fraternal Shangri-La – an escape from the everyday responsibilities of family life. The Watch means hanging with his new friends; enjoying some titty magazines, dirty jokes, and beers; and saying things like, “We’re gonna tear up shit, boys.”

“Bob is longing to hang out with the guys, have some drinks, talk about guy stuff, and let off some steam,” says Vaughn. And ground zero for all the raucous fun is Bob’s tricked-out garage/man-cave and its wet bar, massage chairs, widescreen TV, and pool table.

“Bob is a big Teddy bear of a guy,” says Levy, who is currently directing Vaughn, along with Owen Wilson, in the comedy “The Internship.” “He’s boisterous and gregarious and in The Watch as much for the bromance as for the responsibilities of ensuring his neighbors’ safety.”

The actors and filmmakers were determined to bring an audacity and boldness to THE WATCH. “The film’s DNA doesn’t feel familiar,” notes producer Shawn Levy (“Real Steel,” “Night at the Museum”), “so we needed a director with a fresh sensibility and who would never play it safe.” Enter Akiva Schaffer, who directs, co-writes and edits most of the iconic “Saturday Night Live” Digital Shorts. Says Ben Stiller: “Akiva has a comedy chip in his brain. He’s a genius editor and a true child of the digital age.”

The script required a high level of envelope-pushing. “We had a great script from [co-screenwriter] Jared Stern, but we didn’t want to play it safe and we were determined to make it daring and unexpected,” says Levy. Seth Rogen and his writing partner Evan Goldberg, who had collaborated on screenplays for “Superbad” and “Pineapple Express,” came aboard the project, and their script delved deeply into the group’s skewed dynamics. “The alchemy of the script and Schaffer’s unique voice felt like a really good match,” says Levy. “This is the real thing, not only in its use of language but in its sensibilities, which far exceed the boundaries of good taste.”

“The Watch” opens September 5 in theaters from 20th Century Fox to be distributed by Warner Bros.