Q&A With Moe of ‘The Three Stooges’

Get to know the leader of the iconic hilarious trio in the following q&a with Chris Diamantopoulos who plays Mo in the movie.

The Three Stooges debuted on the big screen in the 1930 black-and-white feature, “Soup to Nuts,” in which they appeared opposite veteran vaudevillian Ted Healy (1896-1937). 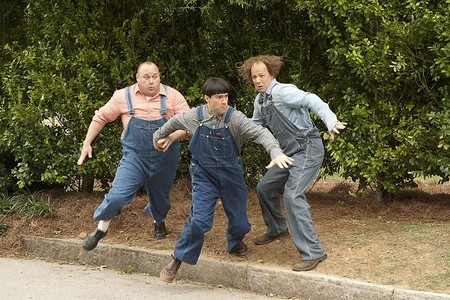 It was Healy who accidentally discovered the Howard brothers (Moses and Samuel Horwitz, nicknamed, respectively, Moe and Shemp) during a 1922 stage performance in Brooklyn (the third member, Larry Fine, whose birthname was Louis Feinberg, came into the fold in 1925). Initially billed as “Ted Healy and His Stooges,” the concept had the trio (Moe, Larry and Shemp) act as foils, or “stooges” to Healy’s jokes. It may have been Healy telling the jokes, but The Stooges were getting all the laughs. 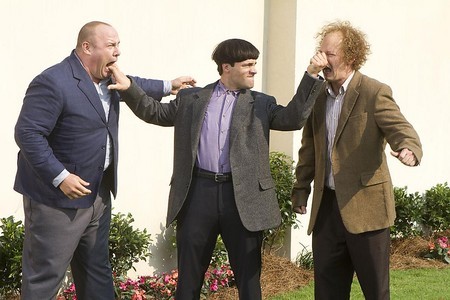 With the renewed popularity of the comedy trio in syndicated television in recent years, it made sense to revive the franchise in a brand new motion picture. 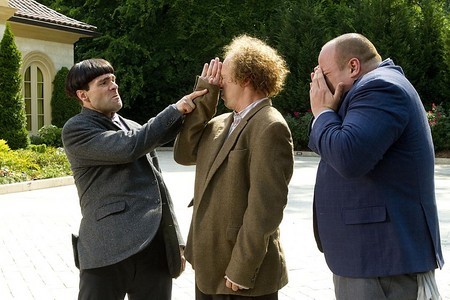 In “The Three Stooges” movie, the trio – Larry, Moe and Curly are introduced as three orphans dropped on the doorstep of an orphanage, ultimately raised by nuns in a very sheltered manner. The only pop culture references they have is from the very limited amount of television they’ve seen, so they don’t really have a concept of what’s going on in the outside world and they stay childlike because they are with children. They’re the ones that don’t get adopted year after year, but then they have to save the orphanage from being shut down. That’s when they’re released into the world, and of course the world colliding with these three nitwits is where the hilarity ensues.

Get to know the leader of the iconic hilarious trio in the following q&a with Chris Diamantopoulos who plays Mo in the movie.


Q: Are you able to do things with these characters that the original Stooges couldn’t?

A: What’s cool is the three guys never really got a chance to show everything that they could do. They were limited by the budgets, by the studios, even by the era, so they had to do what they had to do. There was tremendous talent within the three of them and it’s kind of great that we’re getting a chance to honor and humanize them.

Q: Mo’s pudding bowl haircut was especially iconic: it looks like they’ve done a great job in recreating his look.

A: Actually a lot of people I speak to assume that Mo’s hair was a wig, but the story behind Mo’s hair is awesome. When he was a little kid he had this really thick, luscious, curly head of hair and the kids at school made fun of him until he couldn’t take it anymore. One day he went to a friend’s house after school, pushed his hair forward and took huge shears and just cut all the way around. He was afraid to go home because he thought his mom and dad were going to punish him and ultimately his mom said to him, ‘I’m glad you did it. I didn’t have the heart to do it.’ And thus a comedy legend was born.

Q: Did you do the same kind of slapstick and did you do your own stunts?

A: Yeah – we should get those t-shirts that say, ‘I do my own stunts.’ We actually did a great deal of them. There are a lot of physical stunts in terms of hitting and slapping and poking and punching and kicking and pulling – I broke my finger poking Curly in the eye! We’ve bruised our jaws, hurt our elbows… it could have been really bad actually.

Q: How are you coping with all the slapping?

A: I finally realized how hard it hurts! Our ears were red – they were ringing. We realized early on that there was no way to keep the intensity and emotion behind the physical stuff without actually going for it.

Q: Do you see this as the beginning of a franchise?

A: That would be awesome. I started watching The Stooges religiously and obsessively when I was probably about four or five years old till around the age of 18. I loved them so very much when I was a kid, and when I heard about this film ten years ago I was dubious, as I’m sure many people still are.

Diamantopoulos was destined to play the intolerant leader of the comedy trio — he was born four days after the death of Moe Howard (May 4, 1975). He split his childhood between Canada and Greece (Greek is his first language), began appearing in Canadian TV commercials at age nine.

Following his secondary schooling, he left home to perform in a series of U.S. national tours. He received critical acclaim for his portrayal of Che Guevara in Pittsburgh CLO’s 2000 production of “Evita.” A year later, he debuted on Broadway as Ethan Girard in the popular Tony-nominated musical, “The Full Monty.” He has also essayed the role of Marius in the long-running musical “Les Miserables,” and most recently starred opposite wife Becki Newton in Jerry Zaks’ Encore!presentation of the Gershwin musical, “Girl Crazy” at New York’s famed City Center Theater.

On the small screen, Diamantopoulos is well-known for several diverse character portrayals –”The Starter Wife,” “The Kennedys,” “24,” and in “Behind The Camera: Mork & Mindy.” Diamantopoulos made his film debut in the starring role of the 2000 drama, “The Adulterer,” and includes among his feature credits “Drop Dead Roses,” “Into The Fire,” “Wedding Daze,” “Three Days To Vegas,” and “Under New Management.”

“The Three Stooges” opens October 24 in cinemas from 20th Century Fox to be distributed by Warner Bros.