The film, which hits theaters this November , will show Bella as someone more focused on being a mother to Renesmee than being infatuated with Edward. 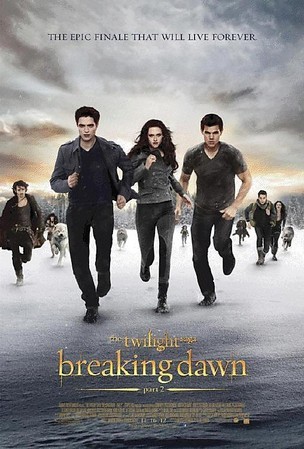 The international poster for the final installment of the hit franchise has been released, featuring Bella (Kristen Stewart), Edward (Robert Pattinson) and Jacob (Taylor Lautner), as well as members of the Volturi.

The film, which hits theaters this November , will show Bella as someone more focused on being a mother to Renesmee than being infatuated
with Edward.

“First movie, its Bella’s intimate experiences, you know with all these incredibly
important moments in her life. And then in this movie, it’s one big idea, vampire
mother,” director Bill Condon, explains. “But it is about following her journey. And that kind of
informed everything.”

In the highly anticipated next chapter of the blockbuster ‘The Twilight Saga’, the
newfound married bliss of Bella Swan (Kristen Stewart) and vampire Edward Cullen
(Robert Pattinson) is cut short when a series of betrayals and misfortunes threatens to
destroy their world.

After their wedding, Bella and Edward travel to Rio de Janeiro for their honeymoon,
where they finally give in to their passions. Bella soon discovers she is pregnant, and
during a nearly fatal childbirth, Edward finally fulfills her wish to become immortal.

But the arrival of their remarkable daughter, Renesmee, sets in motion a perilous chain
of events that pits the Cullens and their allies against the Volturi, the fearsome council of
vampire leaders, setting the stage for an all-out battle.

The Twilight Saga: Breaking Dawn – Part 2 is coming soon in cinemas near you.