Ewan McGregor (“Star Wars” trilogy, “The Impossible”) stars as the king’s most trusted knight Elmont who is tasked to bring the princess back from the giant beanstalk, in New Line Cinema's 3D fantasy, action-adventure “Jack the Giant Slayer.”

Ewan McGregor (“Star Wars” trilogy, “The Impossible”) stars as the king’s most trusted knight Elmont who is tasked to bring the princess back from the giant beanstalk, in New Line Cinema's 3D fantasy, action-adventure “Jack the Giant Slayer.” 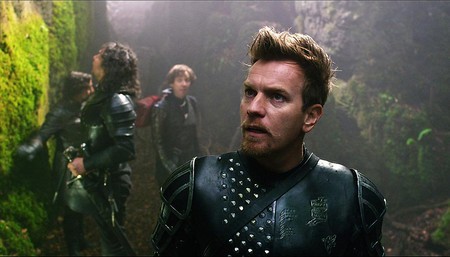 In the film, an age-old war is reignited when a young farmhand unwittingly opens a gateway between our world and a fearsome race of giants. Unleashed on the Earth for the first time in centuries, the long-banished giants strive to reclaim the land they once lost, forcing the young man, Jack (Nicholas Hoult), into the battle of his life to stop them. Fighting for a kingdom, its people, and the love of a brave princess, he comes face to face with the unstoppable warriors he thought only existed in legend…and gets the chance to become a legend himself. 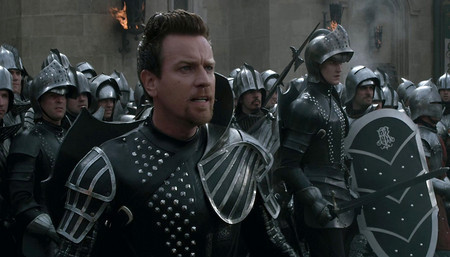 The actor describes Elmont as “the leader of the Guardians, an elite group of top-tier royal knights, and also the royal family’s personal head of security—which means he spends much of his time looking after Princess Isabelle. He takes his responsibilities very seriously, and it’s not an easy job because she’s always dressing up in peasant clothes and giving him the slip. She has all kinds of escape routes from the castle that he doesn’t know about.”

There’s one female in this story, and a bunch of guys who fall all over themselves to rescue her, which is a fun thing to watch,” says director Bryan Singer.

The director envisioned Elmont as “a kind of swashbuckling Errol Flynn character, who does everything with grace and charm and flair. No matter what’s going on, he never breaks a sweat.”

Which is not to say that he does everything well; quite the opposite, sometimes, which can result in some very interesting situations. But he’d never admit it. Still, McGregor says, “Jack looks up to Elmont like a kind of big brother and role model, as do most of the citizens of Cloister. The Guardians are held in high esteem. They wear armor and look after the kingdom and, I suppose, for a young man like Jack, their lives seem quite exciting.”

Adds Nicholas Hoult, “He’s the captain of the football team, the cool guy, the one you want to be. Plus, he’s very close to the princess, so it’s everything Jack aspires to.”

The feeling, at first, is far from reciprocal. When Jack volunteers to join the search party, his request is met with derision from Elmont and his assembled brigade. How could a simple farmhand with no training and no experience hope to hold his own on such a crucial mission? Nevertheless, as producer Patrick McCormick points out, “Though not noble by birth, Jack can still prove himself noble by deeds, and what better place to start than by rescuing the princess?”

As their quest takes them further into the heart of danger with Jack never shrinking from a challenge, Elmont’s mockery turns to playful ribbing, followed by genuine respect, and, ultimately, collaboration.

McGregor can currently be seen starring opposite Naomi Watts in director Juan Antonio Bayona’s “The Impossible,” a drama based on a true story of one family’s terrifying account of the 2004 tsunami. He brings to life the emotional journey of a husband and father vacationing with his family in Thailand when one of the most devastating catastrophes of our time took thousands of lives.

The actor most recently starred in the Oscar-winning slice-of-life film “Beginners” and in Lasse Hallström’s moving romantic comedy “Salmon Fishing in the Yemen.”

From his breakthrough role as the heroin-addicted Mark Renton in Danny Boyle’s “Trainspotting,” for which he earned a BAFTA Scotland Award nomination, to the legendary Obi-Wan Kenobi in the “Star Wars” film franchise, to starring as Christian, opposite Nicole Kidman, in the Oscar®- and BAFTA Award-winning musical “Moulin Rouge!” that brought him Best Actor honors from the London Film Critics Circle, McGregor’s career has been highlighted by a continuous string of bold and daring performances.

A New Line Cinema presentation, in association with Legendary Pictures, “Jack the Giant Slayer” opens in the Philippines in IMAX 3D, Digital 3D and regular theaters on Feb. 28 and will be distributed by Warner Bros. Pictures, a Warner Bros. Entertainment Company.