Get a load of these fun facts involving castmembers Johnny Depp, Armie Hammer and the rest of the crew.

From tricky masks to on-location inside jokes to magically multiplying population, the filming of Disney/Jerry Bruckheimer Films’ “The Lone Ranger” has been filled with fun trivia. Get a load of these fun facts involving castmembers Johnny Depp, Armie Hammer and the rest of the crew. 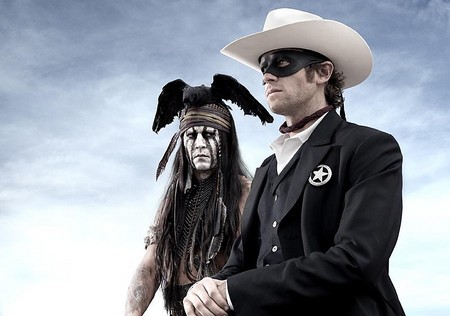 “The Lone Ranger” opens in 2013, exactly 80 years after the character first made its way onto the airwaves courtesy of WXYZ radio in Detroit, Michigan, on January 30, 1933. And coincidentally, Detroit is the city in which producer Jerry Bruckheimer was born and raised! 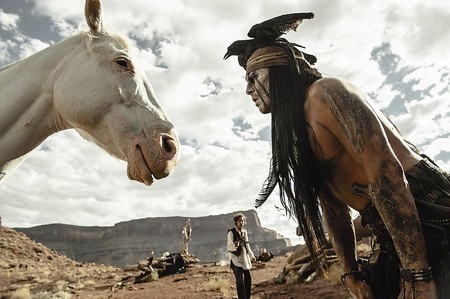 The creation of The Lone Ranger’s mask required much trial and error from Joel Harlow’s makeup department, with ten different designs and seven fittings with actor Armie Hammer. The final version was vacuum-formed over Hammer’s face, and was made of very soft goatskin leather.

The terrifyingly perched “Spirit Platform,” on which John Reid (Hammer) awakens, really was terrifyingly perched at the very edge of Moab, Utah’s Dead Horse Point, with a nearly 2000 foot drop to the valley floor and Colorado River below. The rickety platform itself was an additional 18 feet high, and yes, that really is Armie Hammer and not a stunt performer on top of it!

After wrap on the final day of filming in tiny Creede, Colorado, Johnny Depp held an autograph-signing session with local people for nearly four hours, and despite the fact that the town has a population of only 290, nearly a thousand souls magically appeared for the occasion.

In location in Moab, Utah, the town’s sole sushi restaurant honored the film by creating such specials as “Tonto-maki” and “Kemowasabee Roll” and a drink called “Kemo-sake Mojito.”

On the final day of Johnny Depp and Armie Hammer’s filming in late September 2012, a large cake was wheeled out with a picture decorating its top—not of the two stars, but rather their popular New Mexico-based stand-ins, Wes Trudell and James Blackburn—to the actors’ great amusement.

Rather than hire existing trains, the demands of the script meant that the production needed to build two 250-ton trains, and the five miles of track on which they rolled.

The filming required that several actors—among them Johnny Depp, Armie Hammer, Tom Wilkinson, William Fichtner and Ruth Wilson—stand on top of trains moving at speeds up to 40 miles per hour.

In both Monument Valley and Canyon de Chelly, several key cast members and filmmakers—including Depp, Hammer, James Badge Dale and director Gore Verbinski—lived out of their trailers at base camp, enjoying nightly campfires and music. They were sometimes fed traditional stews and fry bread by a local Navajo family on whose land they were staying.

From producer Jerry Bruckheimer and director Gore Verbinski, the filmmaking team behind the blockbuster “Pirates of the Caribbean” franchise, comes “The Lone Ranger,” a thrilling adventure infused with action and humor, in which the famed masked hero is brought to life through new eyes.

In the film, native American warrior Tonto (Depp) recounts the untold tales that transformed John Reid (Hammer), a man of the law, into a legend of justice—taking the audience on a runaway train of epic surprises and humorous friction as the two unlikely heroes must learn to work together and fight against greed and corruption.

Opening across the Philippines on July 17, “The Lone Ranger” is distributed by Walt Disney Studios Motion Pictures International through Columbia Pictures.