Jamie Foxx, an Action Hero President in ‘White House Down’

On a roll after his acclaimed performance in the Oscar-winning “Django Unchained,” Jamie Foxx now stars as President Sawyer in Columbia Pictures’ new action thriller “White House Down” from director Roland Emmerich.

On a roll after his acclaimed performance in the Oscar-winning “Django Unchained,” Jamie Foxx now stars as President Sawyer in Columbia Pictures’ new action thriller “White House Down” from director Roland Emmerich. 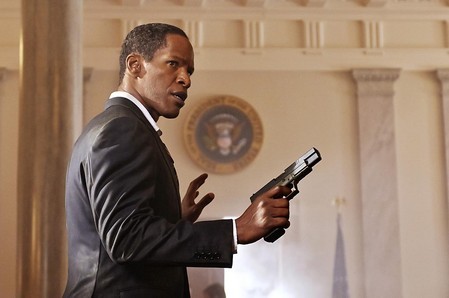 In the film, Capitol Policeman John Cale (Channing Tatum) has just been denied his dream job with the Secret Service of protecting President James Sawyer. Not wanting to let down his little girl with the news, he takes her on a tour of the White House, when the complex is overtaken by a heavily armed paramilitary group. Now, with the nation’s government falling into chaos and time running out, it’s up to Cale to save his daughter, the president, and the country. 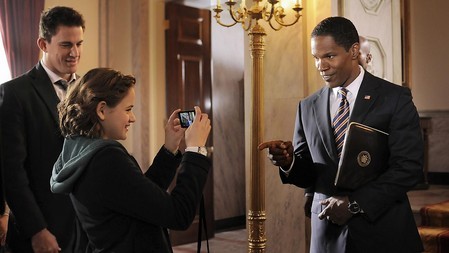 Producer Bradley J. Fischer says that casting Jamie Foxx was part of the key to defining the tone of the film. “We were hoping to find the right actor to play the President – somebody who could play it in a way that was a little disarming,” says Fischer. “We were hoping to find an actor who could bring the gravitas of the presidency, but also a comedic element – not jokes, but funny, light moments that would cut the tension. In a way, Cale and Sawyer are a classic ‘buddy’ pairing. That’s why Jamie was perfect – he won an Oscar® for the way he can inhabit different characters. Not only that, but it turned out he has great chemistry with Channing – they played off of each other in a way that we all found incredibly satisfying to watch. With Channing and Jamie together, the movie is just so much fun.” 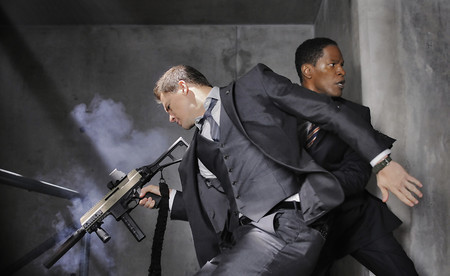 Foxx says that the 46th president of the United States is “a man who would do anything to protect America, but also a man who understands that in order to protect America in this day and age, you have to have an understanding of the enemies. If you don’t have that understanding, or a way to open a dialog, you’ll forever be at odds and something drastic will constantly keep happening.” 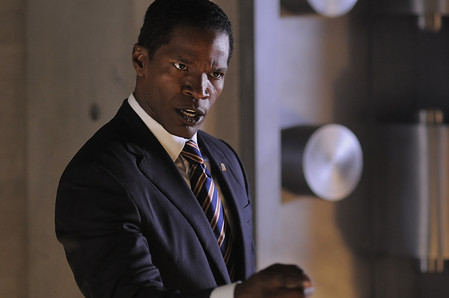 Emmerich says that screenwriter James Vanderbilt wrote the character of President Sawyer as an interesting counterpoint to Cale. “When President Sawyer gets elected, he wants to do so much – and then when he’s in the job, it’s not that easy. He has to spend an inordinate amount of time on the politics of the job,” says Emmerich.  “Whereas Cale’s goal is to try to impress himself and his daughter, the president is holding himself up against greatness – he wants to do something truly presidential, something Lincolnesque. He wants to be remembered as a great president. So that is part of the fun of the movie: you have a former soldier battling it out intellectually with the commander in chief as they’re stuck together throughout the movie.”

“It’s a complicated role,” says Vanderbilt. “You have to have a serious side as the President of the United States, but also, the president in our movie has got to be able to play the fun stuff as well. He’s got to be able to play the physical stuff, the light moments, the dark moments, all of it. And on top of it all, the actor had to be believable as an electable president and pair well with Channing.  Jamie was a perfect choice.”

“In this situation, the President is faced with the beginning of a new world order,” explains Foxx.  “He’s learning that the might of the sword is not always the best course of action. We bring up some of these political issues, but not too heavy on the political side. It’s a fresh look at what I would call a super action hero. Sit down, get ready for the ride, watch Channing go to work and do his thing as Officer John Cale.”

Working with Roland Emmerich was a revelation for Foxx.  “As an actor who wants to be a director, I’d think about the movie and wonder, ‘Wow, the scope! How is he going to make this cinematic?’ got to watch him – I got the chance to look over his shoulder and get a peek at his shot list.It was really a blast. But Roland was also a great collaborator – he allows you to bring in your own voice, your ideas, and then he shapes them in the way that he can execute the movie – and if you go too far off, he’s there to pull you back in.”

Opening across the Philippines on July 3, “White House Down” is distributed by Columbia Pictures, local office of Sony Pictures Releasing International. Visit http://www.columbiapictures.com.phfor trailers, exclusive content and free downloads. Like us at www.Facebook.com/ColumbiaPicturesPHand join our fan contests.