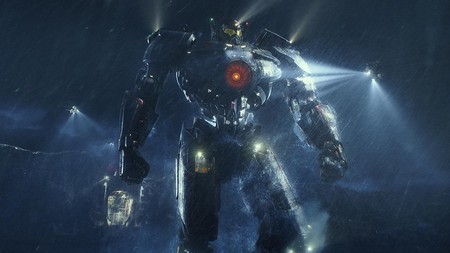 “I love monsters,” states the director who conceived all the various monsters in the film in conjunction with an elite band of concept artists, illustrators, sculptors, and designers. “We had some of the best creature designers in the world involved in the making of the Kaiju.” 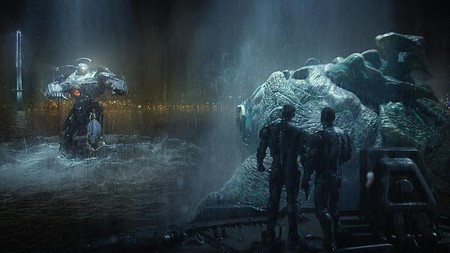 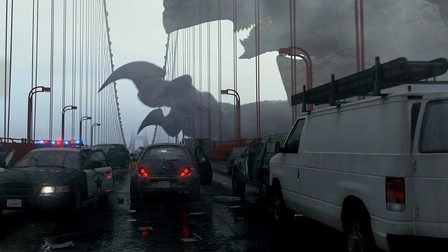 Members of the team brainstormed for weeks, beginning in a windowless room they appropriately dubbed “the submarine.” Together, they examined everything: from sizes, shapes and colors to how the immense beings moved and fought. Del Toro says, “We wanted to evoke the sheer awe and terror that one would feel when coming upon one of these monsters.”

He set down certain parameters: an example being that any animal kingdom inspirations were primarily limited to lizards, crustaceans and insects. For the most part, however, the think tank could let their imaginations run wild, taking a tag team approach as they pooled ideas.

The designers gave the Kaiju different nicknames that were indicative of their most prominent physical attributes, like Knifehead, Axehead, Leatherback, etc. Some are viciously calculated, others are more raw power. “They are living weapons,” del Toro says. “They are blind instinct combined with tactical intelligence, capable of making instant decisions in battle, so there are definitely a few surprises.”

Making them even more fearsome, every appendage on the Kaiju bodies is part of their arsenal. And, as Thomas Tull points out, “They are quickly evolving. With every attack, they learn something and continually progress in both size and tactics.”

Many of the same artists who helped bring about the Kaiju also lent their talents to the formation of mankind’s last line of defense: the giant robots or Jaegers.

Screenwriter Travis Beacham says, “The biggest challenge in the world of ‘Pacific Rim’ is finding a way to beat the Kaiju on their own terms. That was the whole idea behind the invention of the Jaegers.”

Just as every Kaiju is unique, each Jaeger is distinct in both design and function, with its own array of weapons, “so every time you see a Jaeger go up against a Kaiju, it’s a completely different fight,” says del Toro.

The once mighty Jaeger fleet has been reduced to four surviving robots. The director wanted the huge war machines to appear combat-worn, with markings that flaunt the number of enemies downed. Their shape, color and insignias reflect their country of origin, as do their fighting styles.

Del Toro equates the look of the U.S. of A.’s Gipsy Danger to “a classic gunslinger heading into a fight. A mixture of a deco skyscraper and John Wayne. Gipsy has swagger and is made to resemble a WWII fighter jet in paint job and details.” A Mark 3, it is considered an old Jaeger and, although it’s been refurbished, it still carries the scars of war…as do its pilots.

Russia’s Cherno Alpha is a T-series Jaeger with an oversized nuclear reactor. Its exceptional brawn makes up for its more lumbering gait. It is the oldest, heaviest Jaeger in the surviving fleet. “Brute force and blunt trauma are its calling cards,” says producer Thomas Tull.

China’s Crimson Typhoon is a Mark 4, the only Jaeger with three arms, thanks to its three-man pilot team. Its moves are as close as a massive Jaeger can get to martial arts. Jon Jashni observes, “Some of what they’re able to pull off in the course of the movie is a function of them being able to do more with more.”

The Resistance has one Mark 5: Australia’s Striker Eureka. Being the latest model, it boasts faster speed and better maneuverability. “But it’s an Aussie brawler, so it has a lot of bravado and a bit of a strut, like a guy who would pick a fight in a bar,” del Toro teases.

Although the Jaegers would exist only on screen, a great deal of planning went into the mechanics of the robots. “From a technical standpoint, we decided to build them from the inside out in diagrams,” reveals del Toro. “We determined the way the pistons, the relays, the torque, the transmission, the engines, and every other element worked in detail. Then we pulled back and started figuring out the vents, the thermal insulation, the outer skin and so on.”