"Top Gun" stars Val Kilmer and Anthony Edwards are voicing fighter jets named Bravo and Echo in "Disney's Planes," the "Cars" spinoff from Disney Animation. The two F-18s are called upon to help out Dusty (Dane Cook), a crop-dusting single-prop who signs up for a high-flying rally around the world.

"When you think of movies with planes, 'Top Gun' usually comes up, so it is fun to be part of this," Edwards says. "Our naval aviators are some of the best pilots in the world, and Val and I were lucky enough to get to play them twice." 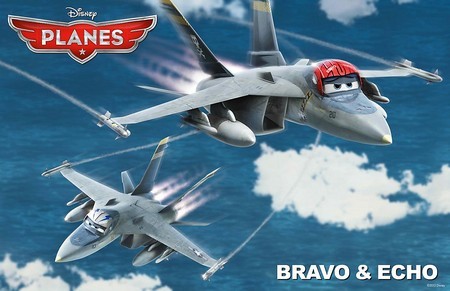 Armed with stellar instincts, incredible aerial abilities and outstanding service records, Bravo and Echo are two of the Jolly Wrenches’ top troops. These fighter jets happen to be avid air-racing fans, too, with a special affinity for our hero Dusty, who’s adopted their Jolly Wrenches insignia. And as far as the racers are concerned, it doesn’t hurt to have a couple soldiers nearby should any plane falter under the immense pressure of the world’s most rigorous rally.

“Dusty gets lost in the air space of an aircraft carrier that Bravo and Echo are patrolling,” says Edwards. “So we escort him back to the carrier to make sure he’s safe. I know if I were ever in trouble, I’d want these guys to have my back.”

“Anthony and I were such great rivals in ‘Top Gun,’ we always had so much fun on set,” says Kilmer. “And I've always thought so highly of Anthony, especially with his success on ‘ER.’ So it was really great to find out that we would both being working together on ‘Disney’s Planes.’” 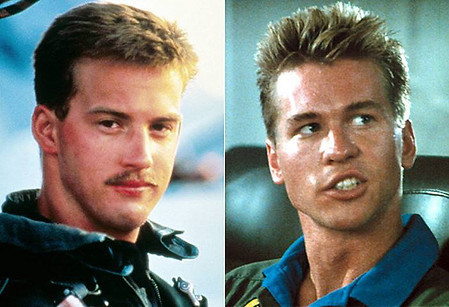 Edwards has starred in more than 20 features, including his memorable turn as Goose in the blockbuster feature “Top Gun.” Other feature film credits include David Fincher’s “Zodiac,” “Flipped” and “The Client.” He will be seen on the big screen in Michael Polish’s “Big Sur,” which premiered at the Sundance Film Festival.

Meanwhile, Kilmer is one of the most prolific actors of his generation. From his more recent work as a career military officer in David Mamet’s “Spartan,” back through his work with Oliver Stone in “The Doors” and Michael Mann in “Heat,” to his early work in “Top Gun,” Kilmer has worked with many of film’s most respected directors and actors. He adds to that impressive list two new films: Millennium’s “Bad Lieutenant,” with Nicolas Cage and directed by Werner Herzog; and “Streets of Blood,” with Sharon Stone and Curtis “50 Cent” Jackson. Kilmer recently completed principal photography on the new Francis Ford Coppola movie “Twixt Now and Sunrise.”

Other recent projects include “Déjà Vu,” an action-thriller produced by Jerry Bruckheimer Films for Touchstone Pictures in which Kilmer stars with Denzel Washington and Jim Caviezel; and “Kiss, Kiss Bang, Bang,” written and directed by Shane Black, and co-starring Robert Downey Jr.

Distributed by Walt Disney Studios Motion Pictures International, “Planes” takes off in Philippine theaters in 3D on Aug. 21, and will be presented in Disney Digital 3D™ in select cinemas.