Two of American television's most loved actresses – Teri Hatcher (“Desperate Housewives”) and Julia Louis-Dreyfus (“Veep”) – breath life to animated characters in “Disney's Planes,” an all-new big-screen adventure from above the world of “Cars.”

Two of American television's most loved actresses – Teri Hatcher (“Desperate Housewives”) and Julia Louis-Dreyfus (“Veep”) – breath life to animated characters in “Disney's Planes,” an all-new big-screen adventure from above the world of “Cars.”

“Disney’s Planes” is an action-packed 3D animated comedy adventure featuring Dusty (voice of Dane Cook), a plane with dreams of competing as a high-flying air racer. But Dusty’s not exactly built for racing—and he happens to be afraid of heights. So he turns to a seasoned naval aviator who helps Dusty qualify to take on the defending champ of the race circuit. Dusty’s courage is put to the ultimate test as he aims to reach heights he never dreamed possible, giving a spellbound world the inspiration to soar. 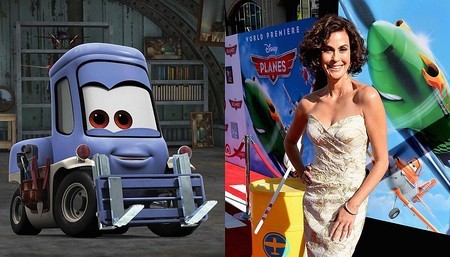 Filmmakers cast Teri Hatcher as the voice of the pragmatic Dottie, a forklift who co-owns and operates Chug and Dottie’s Fill ’n Fly service station. As Dusty’s practical and say-it-like-it-is friend—not to mention his ace mechanic—Dottie hopes to keep his high-flying hopes grounded in reality: Dusty isn’t built to race and chasing his dream is downright dangerous. No matter what he decides, however, Dottie will always have his back.

“I love Dottie; she’s such a loyal friend to Dusty,” says producer Traci Balthazor-Flynn. “She’s strong and intelligent and she’s not afraid to show it. We have such a powerful female presence in this film.” 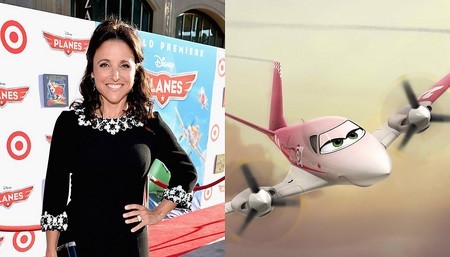 “This story is very relatable and incredibly charming,” says Hatcher. “It’s an everyman's story: you have a certain set of skills, but you dream of something bigger. Do you have the guts to go out and follow that dream or will you let your fears stand in your way? Dottie wants to support her friend in his pursuits, but she’s concerned about him and worried he’ll get hurt. I think she grows and eventually accepts that holding back is probably not the way to live life, and that Dusty should just go for it and follow his dreams.”

Meanwhile, Julia Louis-Dreyfus provides the voice of Rochelle, a tough racer and the pride of the Great White North. Always confident and capable, she got her start running mail to small towns in Quebec, picking up home remedies for mechanical maladies along the way. She also developed a knack for fast travel that ultimately inspired her to give air racing a try. Rochelle never looked back (this competitive contender doesn’t need to). She is relentlessly pursued by charmer El Chupacabra, but steadfast Rochelle is much too focused on winning the race to return his affections.

“Julia Louis-Dreyfus does a lovely French Canadian accent for Rochelle,” says Dan Abraham, head of story for “Disney’s Planes.” “Normally the ladies go crazy for El Chu, but not Rochelle. She sees through his cheesy come-ons and just keeps shooting him down. Then there’s this really funny, sweet moment when he stops being insincere and serenades her. It changes everything.”

He says it often boils down to a quarter of a line to achieve just the right curve. “It’s something I learned when I was in feature animation with a woman who worked on characters like Jasmine and Pocahontas. She taught me how just the right shape, with a little finesse, can make a character beautiful. Rochelle is a sweet airplane who is definitely beautiful.”

Distributed by Walt Disney Studios Motion Pictures International, “Planes” takes off across the Philippines in 3D and regular theaters on Aug. 21.