The film is about his character's 1976 competition with party-boy James Hunt (Chris Hemsworth), which literally ignited the racetracks of the world.

Since the start of his career, Daniel Brühl has been involved in a number of critically acclaimed film and television projects, garnering praise for his talent and versatility.  With several exciting projects in the next 12 months, including two breakthrough roles, Brühl firmly establishes himself as someone one to watch. In Ron Howard's 'Rush', he is Niki Lauda, the legendary Austrian Formula One superstar whose 1976 competition with party-boy James Hunt (Chris Hemsworth) literally ignited the racetracks of the world. 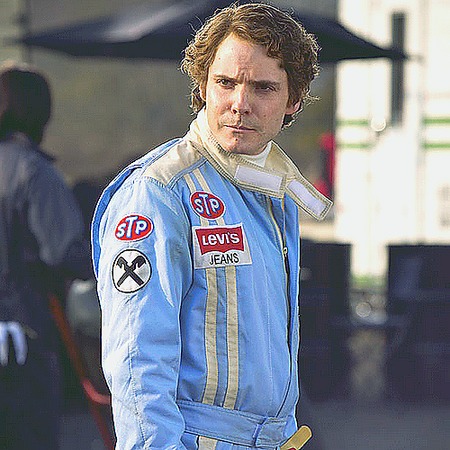 For Ron Howard, Brühl's casting was also a simple choice.  “When I met him, he was clearly that kind of actor-chameleon who loves to create a character.  I knew he'd do a great job with an Austrian accent, and physically, with a little makeup work, I knew he could easily resemble Lauda.  Getting Daniel and Chris to play these roles was a spectacular break for a director.”

Brühl admitted some trepidation in portraying a racing legend.  “I thought, 'How could I possibly play Niki Lauda?  That's a tough part.'  He's a guy who's so different than me, and he's still very present in Germany because he is a commentator on Formula 1 broadcasts,” the actor says.  Still, he went to the audition with no expectations and was thrilled when he learned that Howard had offered him the part.

With his desire for total preparedness, Brühl fell in step with the Rush team.  “At first, I watched a lot of footage and interviews,” Brühl says.  “There's so much you can see about him.  The production company delivered all the material I needed, and I read his autobiography, “To Hell and Back,” which is a real page-turner.”

Then came the prospect of a personal meeting with Lauda.  Naturally, Brühl was nervous to meet the man he would portray on screen.  “Knowing that Niki's very frank and honest I thought, 'Hopefully, he's going to like me and we'll get along,'” Brühl recounts.  “He called and invited me to come to Vienna.  Then he said, 'Just bring hand luggage in case we don't like each other.'  Fortunately, we did, and I could ask him whatever I wanted.  He was so open and generous with his time.”

The famously precise Lauda recalls their time together: “I asked him, 'Is it difficult to play me?'  He said, 'Yes, because you are alive and you are known through television and other things.  People know how you talk and what you do, so it's very difficult for me to really play you.'  So, he came to Vienna to learn the Austrian language and my way of speaking English.  He did a really good job to be the real Niki Lauda.” 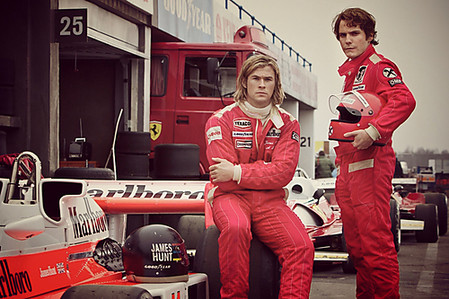 Although Brühl studied his character assiduously, there were aspects he was hesitant to probe in his meetings with Lauda, lest the inquiry be too personal.  He was surprised, however, with the answer he got when he screwed up the courage to ask Lauda about the fiery crash at Nürburgring.  “The interesting thing to me is that he doesn't remember the accident at all,” the actor says.  “It's almost supernatural to me, one of the most fascinating aspects of my part, and it's something I can't understand.”

The contrasting appearances between Lauda and Hunt were corollary to the drivers' approaches to their craft.  Likewise, Brühl and Hemsworth take different approaches to acting.  “We come from completely different directions,” Brühl offers.  “I have the highest respect for Chris' work because it's so physical.  He plays superheroes; that's a lot of work.  I come from a different direction, so the rivalry was believable.  But their journey ends with them almost being friends.  That worked out perfectly with Chris and me, as we share a sense of humor, laughed a lot and teased each other.”  However, the rivalry doesn't end there.  “I must say, I find myself rather sexy in the movie,” Brühl laughs.  “James was the lady killer, but Niki is quite cool as well.”

Equally so, Hemsworth felt comfortable working with Brühl.  “Daniel and I were at similar places in our career,” he explains.  “It's still exciting and new to us.  We're not jaded by it all.  It was a much more organic space to work in.  You'd think it would've helped if we didn't get along off set, so we could work that into our roles.  But, I find it the opposite.  He is hugely talented and committed.  It was also nice to have somebody in the same mindset with whom to bounce ideas around.”

The multilingual Brühl is an emerging presence in European cinema and television who received raves for his international breakthrough role in the 2003 Golden Globe-nominated Good Bye, Lenin!.  He made his English-speaking film debut in 2004's Ladies in Lavender and came to international attention with his performance of German sniper Frederick Zoller in 2009's Inglourious Basterds.

Producer Brian Grazer felt the two actors' energy on-screen from the first day.  He commends: “Chris is a gigantically charismatic, sexy guy who conformed his body to what Hunt looked like. He's magnetic.  And Daniel was amazing in Inglourious Basterds.  He's an unbelievable actor.  It's always challenging to find two people who can compete with one another, who can raise each other's game not only in the film but on the set.  These two actors are confident within their art form and were able to challenge each other for their best performance.”

“RUSH” is released and distributed by Captive Cinema. Showing Nationwide on September 18, 2013.