Tom Hanks plays the titular, true-to-life character in Columbia Pictures' “Captain Phillips,” a multi-layered examination of the 2009 hijacking of the U.S. container ship Maersk Alabama by a crew of Somali pirates.

Tom Hanks plays the titular, true-to-life character in Columbia Pictures' “Captain Phillips,” a multi-layered examination of the 2009 hijacking of the U.S. container ship Maersk Alabama by a crew of Somali pirates. 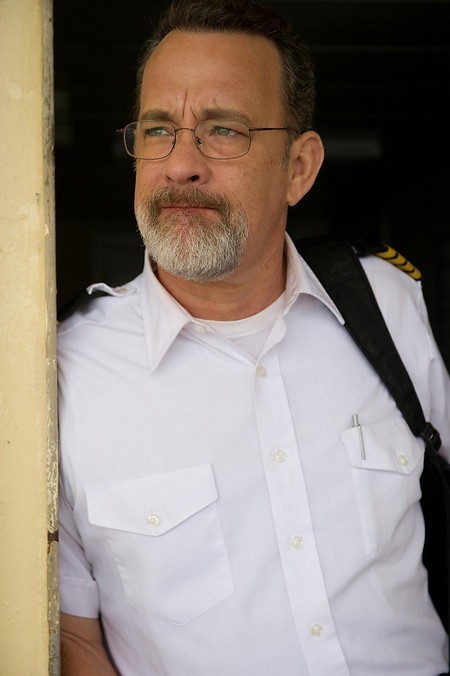 The film focuses on the relationship between the Alabama’s commanding officer, Captain Richard Phillips and the Somali pirate captain, Muse (Barkhad Abdi), who takes him hostage.

The audience will not find conventional heroes in “Captain Phillips” — only human beings in all their societal, cultural, and personal complexities. Director Paul Greengrass saw Richard Phillips not as the engine of the story but rather as a man who, while quietly devoted to his work, gets suddenly swept up into a violent, global event.

“Phillips reminds me of men I knew when I was young, growing up with a father in the merchant marine: the working men who haul the goods we use around the world, who are the lifeblood of the world economy,” Greengrass says. “They are the truckers of the sea. It’s a very physical, blue-collar kind of world. To me, Richard Phillips is that kind of man — a kind of Everyman who finds himself in this unwanted confrontation,” says the director. “He’s really an ordinary person, but the way he responds to what happens to him and what this ordeal he goes through has to say about the world we live in is extraordinary.”

From the very beginning, the filmmakers envisioned Tom Hanks as the veteran merchant mariner Richard Phillips. Hanks has excelled in diverse roles depicting seemingly ordinary men facing extreme crises: from Andrew Beckett, the lawyer suffering from AIDS and fighting a wrongful termination suit in “Philadelphia,” to astronaut Jim Lovell, struggling to return to Earth after a moon mission goes awry in “Apollo 13,” to John Miller, the World War II captain searching for a missing soldier in “Saving Private Ryan,” and to Chuck Noland, the FedEx executive trapped alone on a desert island in “Cast Away.” Hanks builds characters from the inside out, endowing ordinary people with a quiet but extraordinary bravery. His portrayal of Richard Phillips is no exception.

Greengrass says of his first time working with the two-time Oscar®-winner: “Tom and I went on a journey together. In the beginning, he kept saying, ‘For me, it’s really just about a guy in peril on the sea’ — and Tom honed his performance down to something that stark and true. He spent hour after hour in that lifeboat — everyone was moved by how much he put into this. It was not just a matter of his talent, but of his willingness to explore every inch of this man’s humanity — the accuracy of what Tom did and the detail of it was magnificent. I was also incredibly impressed by his physical stamina. We were out on the ocean for hour after hour, and Tom never complained. He was always the first one to turn around and say, ‘I’m ready. Let’s do it again.’”

Hanks prepared for the role by getting to know Richard Phillips, visiting with the captain at his home in Vermont, where he lives with his wife, Andrea, a nurse. Hanks found Phillips to be an affable, self-effacing man who never saw himself as anything more than a seaman simply doing his job.

Incredibly, Phillips returned to his work at Maersk not long after his near fatal ordeal with Somali pirates. “That in particular I found amazing,” said Hanks. “That a man who suffered such a wrenching, terrifying ordeal, could bring himself to go right back to sea. I knew understanding Phillips’ strength — that particular kind of personal fortitude and connection to the sea, despite what happened — would be essential to understanding the sort of man Richard is. The reality is that not everybody has what it takes to be a ship captain — and not everyone could have withstood being taken hostage.”

Greengrass says that Hanks delivered a masterful, truthful performance. “I remember one very difficult scene. We were on the Truxtun and we were getting ready to film the scene, post-rescue. We asked Richard where that interview really happened, and he said it took place in the sick bay. Well, we’d been planning to do it in the Captain’s quarters, but as soon as he said it, the sick bay made much more sense. So Tom and I worked out how we’d do it, and I picked a crewmember from the Truxtun to play the scene with him. As a result, a woman who was not expecting when she woke up that morning to have a speaking role in a movie, or to be acting opposite a two-time Academy Award®-winner, did this climactic scene with Tom that brought the entire crew to tears! It’s just a stunning moment in the film.”

Opening across the Philippines in Oct. 23, “Captain Phillips” is distributed by Columbia Pictures, local office of Sony Pictures Releasing International. Visit http://www.columbiapictures.com.ph for trailers, exclusive content and free downloads. Like us at www.Facebook.com/ColumbiaPicturesPH and join our fan contests.