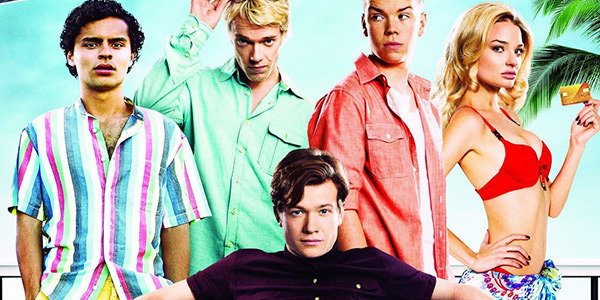 ‘Plastic’ Insists on Reality to its Own Detriment

The film certainly seems to want the audience to root for a couple of these characters, but it doesn’t make much of a case. Plastic is a crime film that is supposed to be based on a true story. It follows four English college students (Ed Speelers, Will Poulter, Alfie Allen and Sebastian de Souza) who make their living as credit card scammers, using various means of identity theft to buy big-ticket items online. But one night, they make the mistake of stealing a briefcase that happened to belong to a vicious gangster. The gangster wants two million pounds from the boys for the trouble. The boys recruit Frankie (Emma Rigby), a data processor for a credit card company, and they head off to Miami hoping to scam their way into the money they need.

The movie’s insistence that it’s based on true events becomes pretty ridiculous as the plot unspools. It’s an unnecessary burden on a film that could have just been dumb fun featuring promising young stars from the United Kingdom. Instead, the claim only makes the film much chintzier than it really ought to be. Though the film insists on some sort of verisimilitude, it can only offer up the flimsiest depictions of real life on screen, its conception of crime drawn exclusively from fiction.

There is a crime boss in this film known only as “Mr. X.” There are tough talking Polish heavies, and gangsters prone to lengthy monologues. And the film is also notable for what it doesn’t show. The illusion of reality would be greatly helped by any sense of the home lives of these boys, of any hint of existence beyond the contrived trappings of their criminal enterprise. But none of that is present in this picture. It instead speaks in the broadest strokes of a depiction of cool young criminals. In an attempt to make it all seem more glamorous than it is, the film makes it out like credit card fraudsters are the type of criminals who wear disguises and sneak into places. The truth is much more boring than that.

What’s also unclear in this film is why we’re supposed to care about any of this. The characters are all pretty terrible people. The film offers a token justification for the things that they’re doing, but in the end they’re just a bunch of young thugs. They’re casually sexist and prone to lying to each other. The film certainly seems to want the audience to root for a couple of these characters, but it doesn’t make much of a case. When the betrayals inevitably come, none of it really matters. There just isn’t much appeal to bad characters betraying other bad characters, especially when it’s all been telegraphed in the last hour.

And the film can’t even be enjoyed for the thrills of the heist. This isn’t a smart plan, and it relies almost entirely on the victims being far stupider than the boys are. And none of it looks cool, the direction and the editing lacking the slickness to make it all work. The acting is all right, though none of the writing really deserves it. At the very least, Ed Speelers and Will Poulter seem to be really trying to do something with this material. Alfie Allen plays the cad very well, but this role is beneath any real effort. Thomas Kretschmann as the film’s nominal villain, but he barely registers with a phoned in performance.

Plastic is thoroughly unimpressive. It is a by-the-numbers heist movie with a weak technical package burdened by the claim that at least some of it is based on real life. But the film does nothing to earn that claim, to at least make it seem it’s a reasonable thing to say. It instead offers up a ridiculous plot with terrible characters based almost entirely on clichés of criminals. And in spite of that, it isn’t ever able to get crazy enough to actually be fun.

High Octane from start to finish, Plastic is based on the incredible true story of the UK Fraudsters from Manchester who stole £20 million worth of diamonds from jewelers in Beverly Hills back in 1997.

“Game of Thrones” Alfie Allen is Bad to the Bone