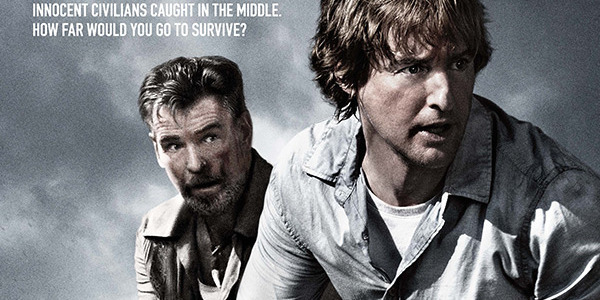 ‘No Escape’ Fears the Other

The film makes vague motions towards some kind of point about Western corporate interests barreling their way into sovereign nations, but it never gets specific enough to make a cogent argument. No Escape is a film that seeks to capitalize on the horror of being trapped in an unfamiliar place, facing down enemies that you don't understand, caught in the middle of a conflict you don't know anything about. To do so, the film creates a fictional Asian country, and has Americans fighting their way out of a bloody coup that seems intent on killing every white person around. It endeavors to make some sort of point, but its arguments don't hold water. It over does the horrors of the other in the story, turning them into something totally unworthy of any real consideration.

Jack (Owen Wilson) has brought his wife Annie (Lake Bell) and their two daughters to a country in Southeast Asia, which is left unnamed. He has gotten work there for a big company that has just won a contract to handle water services for the entire nation. Unfortunately, they arrive on the night of a coup that leaves the prime minister dead. The rebels have a policy of executing any foreigners on sight. Jack and his family must evade the rebels and find a way out of the country.

The film was shot in Thailand, but it doesn't take place in Thailand. All the vaguely Asian text in the film certainly isn't Thai, and the music registers closer to Cambodian than anything else. The movie really takes pains not to offend anyone, which is really a consequence of the unlikely premise. The film makes vague motions towards some kind of point about Western corporate interests barreling their way into sovereign nations, but it never gets specific enough to make a cogent argument.

Because for all its talk of how capitalism and imperialism seem to go hand in hand in the region, it does nothing to present the rebels as anything more than monsters. They are the vicious other, a gang of killers showing absolutely no remorse for killing dozens of innocent people. The reasoning for the coup is never delivered from the mouth of one of these rebels. It is cleanly explained by another white character. The rebels simply aren't granted the privilege of civilized behavior, their actions increasingly horrific even as the film makes the argument for their cause.

This is all delivered with a messy aesthetic, the film highlighting the chaos with a chaotic treatment. It never commits to a particular style of shooting, and shuffles between techniques as it runs through all the action. The most intriguing bit of this film is the casting. Both Owen Wilson and Lake Bell are better known for their comedic roles, and that comes through in the strangest moments, adding bursts of weird humanity to tense situations. Pierce Brosnan is also quite entertaining in this picture, his grizzled expat exuding decades of bizarre backstory through the most cursory of glances.

No Escape doesn't exactly deserve to be called racist, but that's only because it doesn't exactly name a race. Its vagueness is just a function of its need to further dehumanize its antagonists, keeping them unnamed monsters undeserving of any actual sympathy. The film presents itself as being high minded, but it's message might have held more weight if it gave its villains just a shred of decency. It might rail against Western imperialism, but the movie ultimately comes down on the side of white people.

In No Escape, Owen Wilson plays Jack Dwyer, an American who relocates his wife (Lake Bell) and two daughters to Southeast Asia for a new job.

The actor was more than happy to pose with his dashing offspring as they attended the Los Angeles premiere of his new action thriller, held at the Regal Cinemas LA live stadium 14.