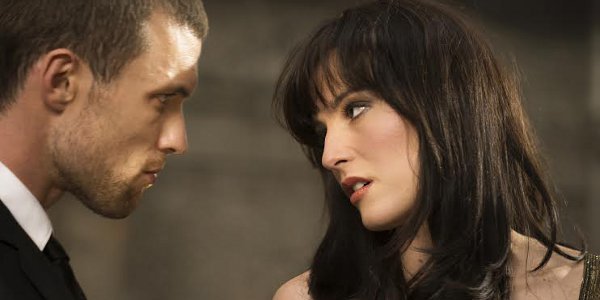 In the French Riviera’s criminal underworld, the best driver money can buy is about to be taken to an all-new level of speed and torque in “Transporter 4 Refueled.”

In the French Riviera’s criminal underworld, the best driver money can buy is about to be taken to an all-new level of speed and torque in “Transporter 4 Refueled.” The movie stars Ed Skrein and Loan Chabanol who race through the streets of Monaco in a state-of-the-art Audi, Frank (Skrein) unwittingly becomes entangled in a scheme to bring down Yuri (Yuri Kolokolnikov), the Russian human trafficker who forced Anna (Chabanol) into prostitution 15 years ago. The script of “Transporter 4 Refueled” by Bill Collage, Adam Cooper and Luc Besson offered an entirely new take on the high-octane action series, which centers on a tough, tight-lipped, highly skilled driver-for-hire. “Refueled is more filled out than earlier Transporter movies because we have several layers, several characters, lots of subplots and revelations that get slowly revealed throughout the film,” observes director Camille Delamarre. “We developed Frank’s character to be less of a caricature. Instead of the bodybuilding hero who never loses or takes a bad hit, Frank’s character suffers. He hurts. And he also does his fair share of attacking.” Although it features plenty of the stunt driving, fight scenes and plot twists that have made the franchise an enduring favorite among moviegoers, the action is fueled by intriguing characters with compelling backstories. Frank is haunted by his wartime service and has a tense relationship with his father, a retired spy. Anna, a prostitute since an early age, refuses to remain a victim of her ruthless pimp. “Besides having a new Transporter and lots of sexy elements, Refueled gives the audience a complex story full of new developments,” says Delamarre. As for the new Transporter himself, Ed Skrein takes unabashed pride in his character’s journey through the mean streets of southern France. “Rolling around on the floor wrestling and fighting with bamboo sticks and punching other guys with pads on and fighting in front of a moving car—the only time you want to be in situations like that is when you’re on a film set,” he says. “I’m a complete pacifist myself, but when it’s scripted that I get in a fight and win, it’s fantastic.” The robberies, kidnappings and gun fights are orchestrated by the cunning women who take charge in Refueled.  Anna, portrayed by Paris-born actress Loan Chabanol (Fading Gigolo) is the leader of this pack of fierce beauties. “Anna’s mysterious, smart, manipulative and charming when she needs to be,” says Chabanol. “She was born in the Soviet Union and was forced to become a prostitute at the age of 12. Now she’s looking for revenge because everything has been taken away from her and she wants to get it back.”

To complement the film’s luxuriant cinematography and production design, Anna and her posse were outfitted in fashion-forward ensembles sourced from high-end brands. “The women in Refueled dress like sexy, very fashionable models,” says Delamarre, whose wife designs purses for an international fashion house. “We had partnerships with several luxury brands who loaned us accessories, purses and dresses.”

‘The Transporter Refueled’ Is Running on Fumes

Though the film offers up a couple of fun action sequences, it mostly plays as a random assortment of macho nonsense, all tied together with a ludicrous plot that involves some of the worst criminal plans in the history of cinema.

Meet the new Transporter. And the new star car in “Transporter 4 Refueled.”