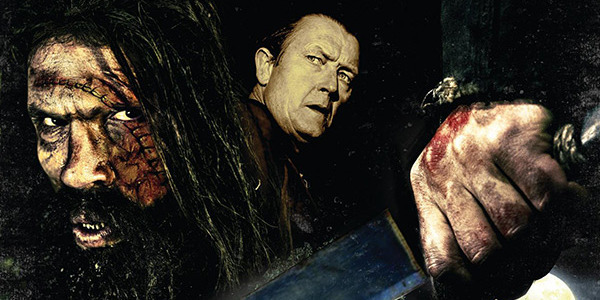 ‘Lost After Dark’ is a Bad Movie Masquerading as Pastiche

The film doesn't actually exhibit much love for the genre to which it's supposedly paying tribute. Any copy you read about Lost After Dark will claim that it is a tribute to 80s horror films, particularly the ones that belong to the slasher subgenre. And while the film does employ some elements of the slasher movie, the tribute doesn't feel entirely thought through. It appears to be using the milieu as an excuse to be bad, as a catchall explanation for why the film is lacking in several areas of production. Lost After Dark is merely a bad film masquerading as pastiche.

The film goes as generic as possible with the setup. It introduces a group of teenagers, all of them with distinct character types. There is the good girl, her best friend, the dreamboat, the jerk, the jerk's girlfriend, the shy fat kid, the outsider, and the black guy. They decide to ditch the school dance to drive a bus up to a cabin. They run out of gas along the way and end up in an abandoned place that happens to be housing a psychotic, cannibalistic killer.

The one thing that the film really does play around with in terms of the genre is the death order. Fans of the genre know that there are certain rules that determine the order in which the characters meet their grisly fate. This film attempts to get clever by messing around with that. In theory, this could have made the film unpredictable, and it might have served as commentary on the genre as a whole. Instead, it's just a dumb gimmick that never really pays off. The film doesn't really do anything with this idea, and basically just ends up making sure that the characters we care about least last the longest.

The film doesn't actually exhibit much love for the genre to which it's supposedly paying tribute. It certainly doesn't live up to the best examples of the genre, and offers little to indicate that it knows anything about the slasher at all. It's all just empty posturing. At one point, it pulls the "reel missing" trick, a joke that doesn't really apply to this era of cinema. It was appropriate in Grindhouse, but it doesn't work here. The experience of the 80s slasher is more connected to the home video era than anything else. To include this lame attempt at postmodern humor within this context is a clear indication that the filmmakers don’t actually know what they’re doing.

The film seems to think the genre as a whole is bad. And even if we were to accept that premise, the impulse should have been to improve it, to use the benefit of perspective to turn these elements into something worth seeing. But this film is actively worse than a lot of the films from the genre. The filmmaking is certainly worse. The editing is sluggish, with every cut seemingly lingering for just a second too long. The acting is all pretty bad, though that seems to be by design. The film has Robert Patrick hamming it up quite a bit. Patrick is a pro, and likely wouldn’t have delivered that kind of performance without prodding from the filmmakers.

If you want to see a real, smart tribute to the slasher genre, then just go to any video store and pick up a copy of the late Wes Craven’s Scream. That film basically ended the entire genre, its clever deconstruction of the formula making it impossible to revisit those same elements. Lost After Dark is just a bad picture exhibiting some facile knowledge about 80s cinema. What’s missing is the passion for the genre, the genuine need to say something about what those movies did.