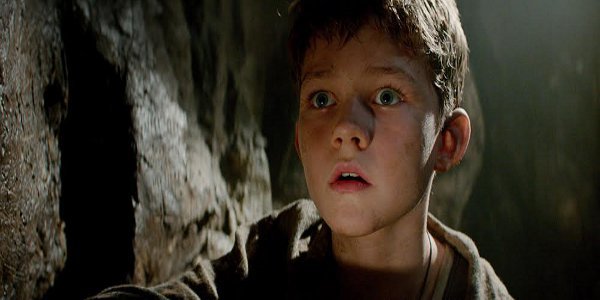 PETER (Levi Miller) is a smart and rebellious 12-year-old boy who has spent his whole life at the bleak orphanage – the Lambeth Home for Boys – believing in his heart that some day his mother will come back for him. But one incredible night, his life is changed forever when he is swept into the sky and spirited off to Neverland – a fantastical world of pirates, warriors and fairies. There, he embarks on a magical adventure where he fights life-or-death battles alongside his new friends, the warrior Tiger Lily and the roguish James Hook, to save Neverland from the ruthless pirate Blackbeard and discover his true destiny – to become the hero who will forever be known as Peter Pan.

JAMES HOOK (Garret Hedlund). With mysterious origins and the swagger of a pirate-in-the-making, James Hook is among the captive dust miners at Blackbeard’s camp in Neverland. Working alongside Peter, he observes the boy’s unique abilities and together they stage a daring escape that propels them into the adventure of a lifetime deep into Neverland.

BLACKBEARD (Hugh Jackman) is the pirate all pirates fear, the most formidable presence in all of Neverland, and master of a vast mining camp in the sky. At times grand, at others diabolically cruel, Blackbeard kidnaps children from other worlds to mine for the priceless pixie dust with properties Blackbeard has reason to covet. Blackbeard himself fears only two things: the increasing scarcity of the pixie dust and a prophecy that tells of a boy who will vanquish him – a boy who can fly.

TIGER LILY (Rooney Mara) has extraordinary skills as a warrior and will do everything in her power to protect Neverland from Blackbeard. When Peter and Hook are captured and taken to her multi-ethnic native village, Tiger Lily’s suspicion of the interlopers gives way to the hope that a long held prophecy has come true – that a boy who can fly will emerge to save the world she loves. Peter himself is not so sure, but Tiger Lily believes in him and becomes his fierce protector in his journey to fulfill his destiny.

MERMAIDS (Cara Delavingne). As Peter, Hook and Tiger Lily venture through Neverland, they arrive at the Mermaid Lagoon, where the beautiful, glowing Mermaids swim playfully. They are the only creatures capable of keeping at bay the enormous Never-Crocs that lurk nearby as they are capable of stinging the predators with their luminous, electrified tails.

The NEVER-CROCS are massive, dangerous crocodiles that lurk just beyond the Mermaid Lagoon. With their incandescent, electrified tails, the Mermaids are the Never-Crocs’s worst fear and greatest foe.

Opening across the Philippines on Thursday, October 8, “Pan” is distributed by Warner Bros. Pictures, a Warner Bros. Entertainment Company.