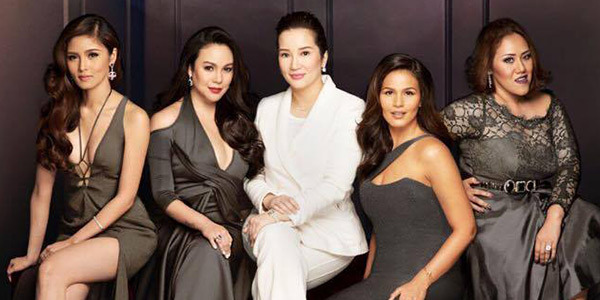 ‘Etiquette for Mistresses’ is Worth Considering, Even After it Falls Apart

It is a rare movie that finds sympathy for the mistress, that doesn’t just treat adultery as a means of generating cheap drama. Etiquette for Mistresses tells a story set in a secret world built around the civility of an affair. Georgia (Kris Aquino), Chloe (Claudine Barretto), Stella (Iza Calzado), and Charley (Cheena Crab) are all mistresses. Ina (Kim Chiu) is the new young mistress of the husband of a presidential candidate, and she’s just been flown from her hometown in Cebu to Metro Manila. Georgia is tasked with helping train Ina in the ways of the other woman. She and her friends introduce Ina to the world of the mistress, educating her with the rules that will keep her lover happy and help her avoid scandal.

For most of the movie, the main conflict lies in two very different approaches to being mistresses, as represented by Georgia and Chloe. Georgia preaches discretion above all else, advising Ina to be content with just being a kept woman, avoiding conflict at all costs. Chloe, on the other hand, demands more from her lover. She complains when one of her credit cards is canceled, and she might scheme to see her lover in a public place. Caught in the middle is Ina, who is young enough to not really know what she wants. She expects more from the relationship, but also accepts the fact that she isn’t the wife.

What follows is emotionally complex and genuinely thought provoking. It is a rare movie that finds sympathy for the mistress, that doesn’t just treat adultery as a means of generating cheap drama. And this film actually has teeth, its script at times directly commenting on matters of gender and politics. It’s pretty compelling stuff, much of it anchored on the genuinely affecting story of Ina and her journey into this strange new world of arcane rules and unexpected loneliness. And then the movie heads into its third act, and it kind of falls apart.

The film takes a pretty strange turn in its last stretch, the plot suddenly focusing on one of the more peripheral characters. It involves the characters aiding and abetting in a felony, which seems like a step too far for this story. It would be fine if the film actually followed through with the narrative consequences of such extreme action, but it doesn’t. It flies towards an ending that it doesn’t quite earn. One can see how the film might have needed a burst of dramatic tension in its final act, but the way it goes about it undoes a lot of the good that came before.

The film offers solid production values. Chito Roño makes a few really inspired choices in direction. There’s a big dramatic confrontation that’s unusually staged for a mainstream film, much of it taking place in darkness, and in one long unbroken take. The editing feels a little rushed, with some pieces just not fitting together right. The highlight in this cast is Kim Chiu, who gives the film its heart. She outshines almost everyone in this cast with the depiction of her character’s earnest struggle to understand what she’s gotten herself into. Kris Aquino and Claudine Barretto just don’t seem to giving as much back as Chiu is offering. Iza Calzado and Cheena Crab are great in the periphery, but neither one of them is given the time to really work.

Etiquette for Mistresses ends in a less interesting place than where it started. One can feel the demands of mainstream, popular filmmaking seeping its way into what is really much more sophisticated story. It’s looking for redemption and happy endings, even when the story doesn’t quite call for it. Still, for a good long while, the movie is really compelling, its story finding the pathos in a kind of woman that’s easy to dismiss. That it attempts to challenge norms at all makes it a movie worth considering, even after it all falls apart.