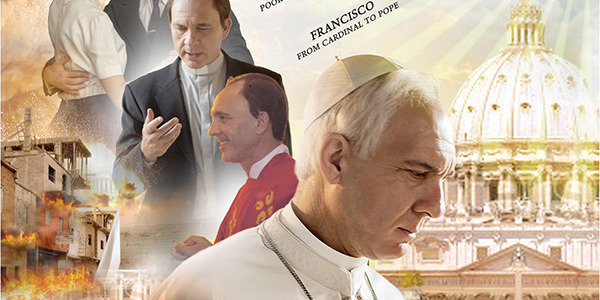 ‘Papa Francisco’ Doesn’t Shed Much Light on its Subject

The film is being sold on telling the life story of Pope Francis, but there’s actually precious little of that in here. Papa Francisco, known internationally as Francis: Pray for Us, is a biopic that doesn’t shed much light on its subject. It spends too much time in the recent past, mainly following its titular character through the last ten years of his life, through the lens of an inessential framing device. This film offers up little that couldn’t be picked up from the thousands of articles and news stories that have already tackled this Pope. It feels like a film that’s just trying to cash in on the popularity of this current Pope, and it falls well short of revealing anything about the man.

The film doesn’t even really start with the Pope. It first introduces Ana (Silvia Abascal), a journalist from Spain who in the opening moments is in Buenos Aires with her daughter, taking a tour that takes her through the life of Jorge Mario Bergoglio (Dario Grandinetti), the priest who would become Pope Francis. She’s apparently doing research on him for a book. The film then cuts back to 2005, when Ana is first given the assignment to cover the Vatican conclave. This is when she first meets Padre Jorge, who becomes a major part of her life.

The film is being sold on telling the life story of Pope Francis, but there’s actually precious little of that in here. There are very few scenes in the film set before 2005. It barely passes through his formative years, and never really gets to the bottom of his character. There is an intriguing detour through a tumultuous time in Argentina’s history, but again, the film just doesn’t go into much detail. Instead, the film invests a lot in the story of Ana, who happens to meet Padre Jorge at a tumultuous time in her life. There isn’t actually anything to this character or her relationship to the man who would be Pope. She’s basically there as a extraneous narrative device.

The film might have gained something in simply exploring Padre Jorge’s crusades. It mentions offhand that there is corruption within the Church, and that he’s made some powerful enemies by speaking out against certain things. But once again, the film is light on specifics. The film seems afraid to offend and accuse, which seems inappropriate given how outspoken its subject is about certain things. It could have stood a lesson or two from Pope Francis, who is presented in the film as someone who isn’t willing to back down, even when it’s the easier and more convenient choice.

Dario Grandinetti is one of the finest Argentinian actors around, but he doesn’t really seem to be the best fit to play Pope Francis. He is certainly a charismatic performer, but he exhibits little of the warmth and kindness for which this Pope is known. Grandinetti doesn’t really exude humility, the actor bearing a certain harshness that reads as regal and patrician. Silvia Abascal is stuck in the thankless role of Ana, who again, isn’t really much of a character.

It should also be noted that the local version of Papa Francisco has had a music video attached to it, one featuring a song written and performed by Cardinal Tagle. This is all well and good, but it appears that attaching this video has caused the movie to have a warped aspect ratio. I’ll note that this might have been a problem isolated to the cinema I saw the film in, but my gut tells me this is a widespread issue. This renders the film unwatchable for anyone who cares about image quality at all. I don’t think the film is good, but it deserves better than this treatment from its local handlers. Given how it’s being shown in our theaters, there’s just no reason to go out and see this film.

In Times of Peace and War "Papa Francisco: The Pope Francis Story"

The life of Pope Francis, Roman Catholic church’s 266th Pope who was elected in March 2013 will soon be unveiled in Philippine cinemas on September 30in the upcoming film “Papa Francisco: The Pope Francis Story” also known as “Francis: Pray For Me.”

Earlier this year, last January, Pope Francis, the leader of the world’s more than 1 billion Catholics visited the country who inspired and left an unforgettable imprint within the nation with his warm, sincere and jolly persona as he evangelized of the gospel and God’s love for the mankind.