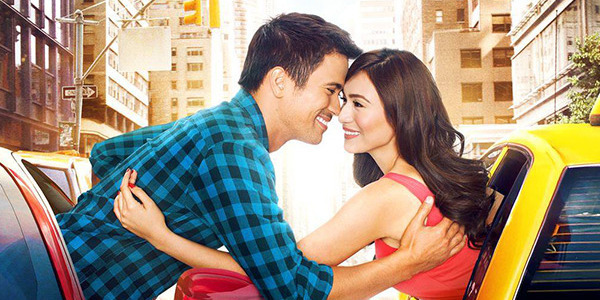 ‘The Prenup’ Doesn’t Get Real

This a story built on class warfare, and there's plenty that could be said about how the different sectors of society view each other. The Prenup attempts to do the classic setup of lovers being torn apart by families that don’t get along. It does so, however, with a thicker veneer of artificiality than any other film that tackles that idea. It goes awfully broad from minute one, and never really lets up. With the characters offering little in the way of actual humanity, it becomes a real challenge to care about anything they’re going through. With its premise, the film had a chance of addressing tricky issues in our very class-conscious society. Instead, it yells out a bunch of really broad jokes.

Wendy (Jennylyn Mercado) is visiting New York to meet her biological father. When she gets there, she's disappointed to find that she can't stay with her dad. Luckily, Sean (Sam Milby), who she met on the plane, lets her stay with him in his apartment. The two fall in love, and resolve to get married once they get back to the Philippines. Their plans are derailed, however, when their families meet each other. Sean's parents insist on a prenup, which Wendy's family takes as an insult. A rift grows between the two as their families argue over the terms of the contract.

There are two distinct halves to the movie. The first half is mostly set in New York, and features many of the classic romcom tropes. The second half is all about the conflict between their families. Both halves suffer from the same problem: a general lack of realness. Their romance feels like a friendship at best, and their decision to get married is made in haste. This half basically runs through an entire romcom plot, skipping over much of the narrative work needed to make the relationship matter. The yearning to see these two together should form the solid narrative base for everything that follows, but there just isn't anything there.

And in the second half, the film mostly gets unbearably loud. This a story built on class warfare, and there's plenty that could be said about how the different sectors of society view each other. Where this film goes wrong is that the conflict isn't built on a lack of understanding. It is instead built on terrible people.Neither side is really trying to be decent human beings. In the name of "comedy," this half of the movie is built almost entirely on bad behavior, which makes it difficult to care about either side.

Caught in the middle are the two main characters, who don't really have anything to fight about. But they fight anyway, because that's what this kind of movie calls for. Their conflict is awfully contrived, and is largely founded on the intrusion of third characters who don't act in any way that one might recognize as human. The performances follow suit. Jennylyn Mercado, stuck with a character that openly talks out loud to no one in particular, is left to shout every line. Sam Milby plays it smaller, and looks completely out of place in a cast prone to mugging.

There is one real moment in all of The Prenup. There is a scene in the middle of the mess of the second half where the couple is having dinner, and they both start blaming their own families for the conflict. They get weirdly competitive in accepting blame, before realizing how silly they're being and laughing it off. This is what is largely missing from this film. At some point, you just expect these people to realize they're being silly, because you want them to be reasonable human beings. But the film rarely invests in the humanity of these characters, and simply contrives its way to a clunky resolution.