‘Just the 3 of Us’ Goes on Autopilot

It introduces a wrinkle that doesn't feel like that big a deal, and it forces the characters to act completely irrationally. Just the 3 of Us mainly tells the story of a cad who learns to care. Airline pilot Uno (John Lloyd Cruz) is laser focused on attaining his captaincy. He pretty much has nothing else in his life. And then, on a drunken bender one night, he has sex in a bathroom with a random girl at the club. That girl turns out to be CJ (Jennylyn Mercado), who seeks him out three weeks later to tell him that she's pregnant. Uno doesn't believe that the baby is his, but with CJ having nowhere else to go, he offers to take her in until they can get a proper paternity test. Uno sees CJ as little more than a persistent inconvenience, but that changes as he spends more time with her.

The movie spends a lot of time establishing that Uno doesn't want to be with CJ, and it gets a little rough as the woman swallows all her pride for the sake of having this man support her. This becomes another story of reformation; of the persistent, infatuated female eventually winning over the cad, making him realize that he actually wants to be a good person that cares about others. It's not a great story template, but given that, the film mostly works through it. It more or less gives Uno plenty of logical reasons to be a cad, and though his inevitable transformation feels abrupt and a little artificial, the film comes to display a sweetness that can be affecting.

But the film adheres to a certain formula, and there comes a point where the story has to mechanically fulfill the obligations of the structure. Whatever sweetness the film built up is lost when it gets to the point where it has to break them up again. It introduces a wrinkle that doesn't feel like that big a deal, and it forces the characters to act completely irrationally. And to resolve these issues, all the film can really offer is a parade of people telling the characters what they should be doing, instead of having the characters figure it out for themselves.

The film seems to work best at its fringes when it's painting out the world beyond the romantic concern. The movie even becomes kind of elegant as it depicts who these people are outside of the relationship. Just the contrast between the first scene of Uno coming home and the first scene of CJ coming home tells a better story than the one the film ends up telling. These are people who come from different places and are driven by very different things. It is these early moments that give the relationship weight later on, even with hardly anything being said.

This is all to say that the film has its good moments, perfectly pitched scenes that are put together with the expert care of a director who really knows the genre. The actors, all hardened veterans of romcoms, perform as expected. John Lloyd Cruz and Jennylyn Mercado, in moments, are able to make their relationship seem plausible; maybe even inviting. It’s just that these moments are strung together mechanically, the film unable to escape the harsh specter of formula.

Just the 3 of Us offers a mixed experience. There are singular scenes where the shortcomings of the overall story don’t really matter, where the dramatic craft exceeds the limits of this story. But there are also long sections where the film is basically on autopilot, gliding through dramatic business out of some imagined obligation to audience expectations, in the process making the characters seem completely unreasonable, only to waive all of their wrongdoing in a mad rush to resolve everything. And at the very end, as the credits role, the film tacks on a last reveal that undoes some of the dramatic gravity of one of the choices. Because we can’t have uncertainty within this structure. There is no room for variation. 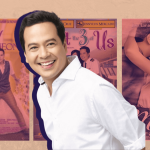