The movie is basically just contriving the two together, without really allowing them to take the kind of risky steps that make a romantic story compelling.

Bakit Lahat ng Gwapo May Boyfriend?! centers on wedding planner Kylie (Anne Curtis-Smith), a young woman who, following a string of boyfriends that turned out to be gay, prides herself on her ability to spot the telltale signs of a closeted gay man. Her boss Benj (Paolo Ballesteros) asks her to ply her skills on his childhood friend Diego (Dennis Trillo), who he's had a crush on forever, and us about to get married. And though she sees plenty of the signs that she's trained herself to avoid, she also finds herself falling in love with Diego.

There are two parallel narrative imperatives set up in this story. Part of involves the mystery of whether or not Diego is gay. The other involves the feelings that develop between him and Kylie. What's interesting is that neither of these impulses actually proves to be fodder for the plot. They don't enable the characters to do much to better their situation. In the first case, the film is all about keeping it ambiguous. As knowledgeable as Kylie supposedly is, there's really not much that she can do to further her theories. She's just pointing small, stereotypical details out and jumping to conclusions.

And in the second case, the conflict is kind of a non-starter. The big risks in this plot line aren’t really taken by the main character. This is really more the story of Diego, who basically has to endure his straw man fiancée’s shrewish behavior in order to realize what it is that he really wants. The movie is basically just contriving the two together, without really allowing them to take the kind of risky steps that make a romantic story compelling. It’s all done within a safety net that keeps these characters from doing anything remotely interesting.

The film does redeem itself a bit when it finally gets to the point. It will rail against the superficiality of Kylie’s worldview, and finally forces characters to confront what the story has been dancing around for the previous eighty minutes. There is some clever writing in the way that Kylie eventually reveals her angst. And there is a measure of subversive merit in the general portrayal of what it is that women want. It all comes a little too late, and the message all comes out a little muddled, but it’s nice that it’s in there somewhere.

This comes together in a passable technical package. The film looks good enough, but there are slight hitches in the editing. There are transitions between scenes that just don’t feel natural. Anne Curtis feels pretty assured in this role. She carries the right kind of confidence that makes this character work. Her chemistry with co-star Dennis Trillo is a muted at best, but to be fair the two of them are handicapped by the various contrivances that surround their characters. Paolo Ballesteros is an interesting presence on screen, but his character doesn’t really go anywhere.

There is cleverness in Bakit Lahat ng Gwapo May Boyfriend?!, but in the end it’s the iffier bits that win out. It’s all just structured so weirdly. There are a few funny bits in there, but they seem to exist in isolation away from any sort of narrative imperative. The story just doesn’t give the characters enough to work with, the romance at the heart of this film never really taking off in a meaningful way. The ideas become clearer in the back end of the film, and there is merit to some of things being conveyed. But it just isn’t enough to save the whole thing. 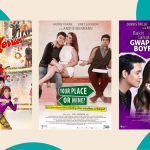 Plan your movie marathon this November with this list of 8 films to watch out for in PBO Channel!