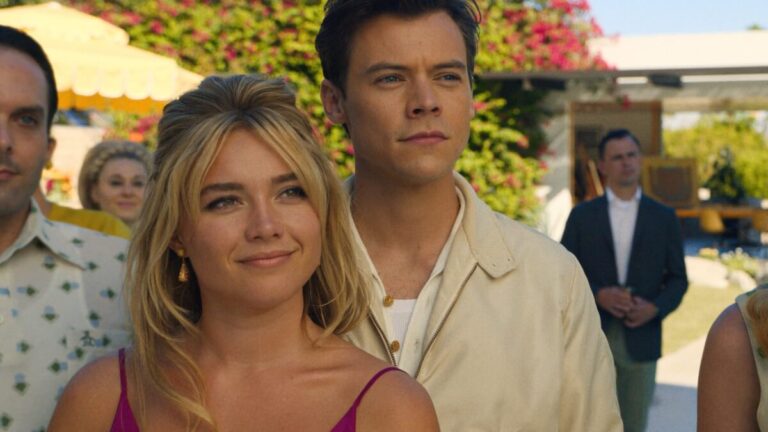 MOVIE REVIEW: ‘Don’t Worry Darling’ is telling us to worry and that nothing is what it seems

Florence Pugh channels her character from ‘Midsommar’ and then takes it to a different level in ‘Don’t Worry Darling.’

From its opening scene, Don’t Worry Darling is already telling you something is wrong with this picture. And it’s a happy moment: the film begins with a wild, drunken revelry between three couples in what seems to be an image of the ideal 60s American life. They are drinking, dancing, teasing each other. They are young and beautiful and seemingly madly in love with their respective partners. In fact, our leads Alice and Jack (Florence Pugh and Harry Styles) can’t seem to get enough of each other, kissing and having sex at every opportunity. But something is off and Alice is beginning to take notice.

The filmmaking, with Olivia Wilde in the director’s chair, is visceral and luscious – from its cinematography, blocking, choice of musical score, and the performances of the majority of the cast – and gives you a building momentum of dread. Something is very wrong in this picture-perfect representation of the American dream. Every so often, there’s an earthquake and the women react almost by reflex in ensuring their drinks stay stable and nothing falls to the floor. The men leave for work in an almost synchronised exit in their shiny Cadillacs or whatever fancy car model they have in that era. The musical score of John Powell is intricate as it is eerie. Its haunting melodies are created by vocals and even rhythmic breaths, sometimes a drone sound of fuzzed bass or a sudden explosion of violent strings. It’s intrusive. It punctures the visuals and it really gets you going. Oftentimes, the score is designed so that you think it’s diegetic, that it is part of the scene and then you realise it isn’t and it adds to the atmosphere.

Wilde does an amazing job at instilling a sense of dread and danger in every moment of ‘Don’t Worry Darling,’ subverting the whole idea of the ideal 60s concept of Americana – the white picket fences, suburbia, the glamorous 60s – but Wilde ends up showing how hollow it really was; that it is nothing more than a frightening veneer covering up something dark and twisted and horrible.

The narrative unfolds like a slow-burn horror film, with moments of genuine weirdness that remind you something is amiss. From the get-go, you know this film is centered around the issues of women. This time frame positions women as the support system of the men as they go through their daily work. We know this is sexist, that this world is sexist, and just like Alice, we start to question the very fabric of this world’s reality. What is this Victory Project that the men are working on? Who is Frank (played by Chris Pine), this charming figure who leads this community and everyone seems to be so enamored with? What will happen to this couple as Alice becomes more and more certain something is wrong as Jack seems to be climbing the ladder to success?

The feminist themes are apparent. The film explores and dramatizes the idea of control, of gaslighting, and questioning the role of women in a marriage and in society. It can feel heavy-handed as the film is centered mainly through Alice’s point-of-view and this is all that she sees but it’s interwoven so intricately into the entire concept of the movie that I don’t mind it. These are issues that are still relevant to this very day and age.

Florence Pugh channels her character from ‘Midsommar’ and then takes it to a different level in ‘Don’t Worry Darling.’ She’s a wonderful anchor for this movie as she can make this sense of paranoia into something so palpable and it makes her reactions so believable. In a way, she plays off so well with Olivia Wilde, who plays an exuberant neighbour, someone who is completely sold into this world; and also with Gemma Chan, who plays the wife of Frank, who contrasts the two women through stillness and silence. These three women show off a range of layers in various ways that it’s great to see them work. It layers the movie wonderfully by showing off a dynamic range of women characters.

And for the men, it’s Chris Pine who steals the show. As mentioned above, he’s magnetic and charming, maintaining a hint of the sinister behind an easy smile while expertly delivering stirring monologues that, when you really think about it, says nothing specific or substantial at all. This adds to the mystery that the film is working towards.

And the big reveal is my only real gripe in ‘Don’t Worry Darling.’ Once uncovered, there’s an element of it not being equivalent to the build-up that happened. It’s a bit mundane, maybe even a little cliche. The big revelation is not as clever as it could have been. The experience that you get through only to find out that it’s that is a bit of a letdown for me. There’s so much creativity and imagination in the first hour and a half that the ending feels like they ran out of steam.

But it’s a tiny gripe since the overall experience of watching this film is so good that I can forgive the banality of its ending.