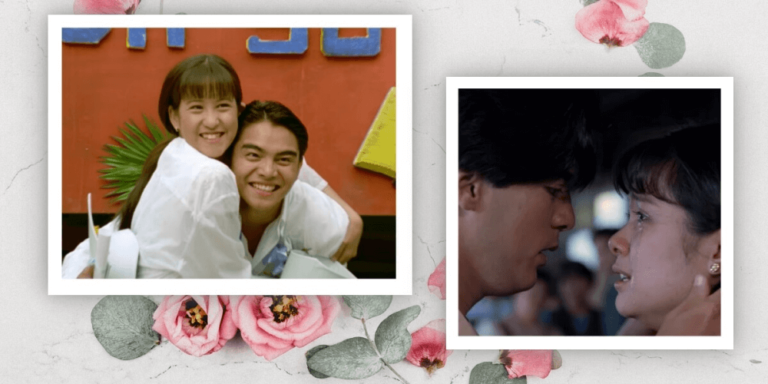 While the recent crop has brought us JaDine, KathNiel, LizQuen, and AlDub, the golden era of tandems started way back. This Valentine's season, We’re taking a look back at memory lane and remembering our ultimate OG faves.

Love teams have always been a mainstay in Philippine entertainment. They’ve graced our televisions and silver screens, making us gooey-eyed believers of love all over again. While the recent crop has brought upon us the likes of JaDine, KathNiel, LizQuen, and AlDub, the golden era of tandems started way back. And because we’re feeling all sorts of nostalgic this season of hearts, we’re taking a look back at memory lane and remembering our ultimate OG faves.

Claim to fame: Guy and Pip, as this tandem was so fondly called, rose to fame because of their unconventional pairing. Tirso’s ‘Pip’ was the tall mestizo with the burgis features to Nora’s ‘Guy’—the petite morena and dalagang Pilipina. Their tandem spawned a legion of loyal fans who swooned at every opportunity they looked lovingly into each other’s eyes.

Reel or Real: Their box-office success went on strongly for two decades from the ‘60s to the ‘80s, and across genres from teenybopper flicks to award-winning dramas. This silver screen royalty did see the light of day with their then on-and-off relationship in real life (They’re even proud parents of a life-sized doll).

Claim to fame: Dear Heart, a story about the beginnings and challenges of first love, was the first we saw of the dynamic duo on the screen. Many found the pairing of the Megastar, then “Jukebox Princess”, and the 1980s Regal Films heartthrob simply irresistible. The ‘80s may have ended but to this day, they are still dubbed as the showbiz couple that defined the era.

Reel or Real: The golden picture-perfect couple’s sparks immediately flew from reel to real. They tied the knot in 1984 and officially broke it off in 1993, but they remain kindred spirits.

Claim to fame: This love team had a penchant for the comedic side of things, and this was what truly set them apart in the industry. Their fun youthful chemistry punctuated by their iconic on-screen squabbles cemented their status in the love team hall of fame.Fans were keen to give them the monicker “Taray and Kulit”.

Reel or Real: Their fire chemistry on screen translated briefly off screen. But the two lover’s frequent away-bati moments gave way when they finally broke up once and for all. So much for their precious wacky antics.

Claim to fame: The charming pair were only really paired two times, but the chemistry is way too palpable to deny. Even their seemingly baduy term of endearment, ‘Babes’, make us giddy with kilig just thinking about it. The ‘90s matinee idol and the broadway darling together sure is a class act.

Reel or Real: Their doting eyes never made the cut in real life. But an old letter Aga penned to Lea just resurfaced with him confessing his then feelings, “Lea is the one that got away and she never knew,” it said. Close enough. We can still cross our fingers and wish for a reunion movie, right?

Claim to fame: One of the most enduring love teams to date, this tandem has starred in about 25 movies since their first in Tag-Ulan sa Tag-Araw, and in the span of three decades. Their intense on-screen confrontations and powerful performances have been subject to many rave reviews, box-office hits, and prestigious awards.

Reel or Real: While they’ve never been actually linked to each other, The Star of All Seasons describes her team-up with ‘Boyet’, “I don’t really know where our chemistry comes from but ever since the first movie we did together, we already know what to do to make a take very good”.

Claim to fame: If the Budjoy and Ned story—the original friendzone tale—does not ring a bell to you, have you been living under a rock for the past decade? The iconic movie has been immortalized in Filipino pop culture (it has recently been reincarnated by way of that infamous Twitter thread that’s got netizens amused). Then there’s that “chuva choo choo” line that lives on in our memory.

Reel or Real: The OG teen royalties of the ‘90s have been coy about their score off-screen back in the day. Jolina has admitted to being crazy in love with Marvin to no avail. In a Gandang Gabi Vice episode in 2014, however, Marvin had this to say about their once upon a time romance, “Di man naging tayo, totoo yung naramdaman ko para sayo.”

Claim to fame: With their youthfully immaculate good looks (Rico was even dubbed as the ultimate Crush Ng Bayan), it’s apparent that these two were made for the spotlight. Arguably one of the most celebrated loveteams of the ‘90s to the early 2000s, they first met while filming Radio Romance the Movie. Their reel romance would blossom even more with the success of the teleserye Mula Sa Puso and starring roles in various rom-com hits.

Reel or Real: The two eventually became a couple in real life, but a tragic fate shortened their blooming romance with Rico Yan’s untimely death in 2002. Fans were in a frenzy after Claudine posted notes of her late lover from their years together, proving that the magic this tandem has since created still captures hearts to this day.

Claim to fame: Way before Juday’s pairing with Piolo Pascual and Ryan Agoncillo, there was Wowie. Their loveteam rose to fame in the long-time running teleserye, Mara Clara. It’s safe to say that this was the epitome of young love in the mid-90s. Back then, the two didn’t undergo auditions, screen tests, or workshops to see if they had chemistry. They were paired at random and look at where that ship sailed.

Reel or Real: That ship definitely sailed and translated off screen. Wowie was actually Juday’s first boyfriend. It was simply inevitable given they were together everyday from tapings to breaks to out of town shows. Naturally, the two developed feelings for each other. Their romance has long fizzled since but they remain good friends to this day.

What you should re-watch: Muling Ibalik Ang Tamis ng Pag-Ibig (1997)

Claim to fame: Everyone fell in love with Popoy and Basha in One More Chance, the flick that undoubtedly set the bar high for movies in the genre. A decade later and we still memorize every iconic dialogue from “Sana ako nalang, ako nalang ulit” to “She had me at my worst, you had me at my best. And you chose to break my heart”. The list goes on but we really wouldn’t have much space for it here if we went on.

Reel or Real: After a number of films that just seem to further solidify their match-made-in-heaven pairing, and more than a decade’s worth of it, they never dated in real life. Maybe that’s where the Lloydie-Bea magic on screen lies. We’ll count that as a blessing in disguise.

Claim to fame: When two gorgeous stars get paired together, it’s the flawless recipe for on-screen success. And this was the case with EchoTin ever since their soap opera stint in Pangako Sayo as Angelo Buenavista and Yna Macaspac. This catapulted their names in showbiz and even internationally, as the show aired in some countries in Asia because the hype was just too real.

Reel or Real: Their high-profile off-screen relationship became the stuff of media outlets and tabloids. Their glossy fairytale romance made the early 2000’s swoon collectively. Today, they’ve been reduced to former sweethearts and respectively, in happy marriages, but the two remain good pals.

What you should re-watch: Forevermore (2002)